There’s been a lot of news surrounding the great philatelic principality of British Guiana in recent months, and although there are sometimes lulls in such headlines from what is an iconic stamp producing British Colony, they are few and far between, not least because of the illustrious rarities and philatelic pedigree intrinsically entwined with the postal history from this South American coastal country. And it is equally as infrequent that the topic of British Guiana gets raised without the mention of ‘Townsend’, and that is a fact because William A. Townend (1904 to 1993), is synonymous with the collection and study of this particular British West Indies location, and one of the reasons he steps out onto our acclaimed podium of legendary collector’s in the company of the famous, John E. du Pont, and the statesman Ernest R. Ackerman, both who left indelible marks on the exact same subject.

Now, what Townsend shared with Ackerman and Dupont, was not just the theme of their prized collections, but he also, like them, achieved the accolade of winning an International Gold Medal for his British Guiana exhibit. 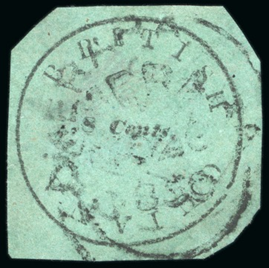 Of course all three legends represent the very best of the royal blood in Provenance, and it is no surprise that when Townsend sold his British Guiana collection in 1969 many of the key items were purchased by our infamous Mr Dupont. And it was in the following year, 1970, that Townsend cemented his status as one of the all time greatest collectors of this region, when with the help of F.G. Howe, he published what is still today the definitive work on the topic; The Postage Stamps and Postal History of British Guiana.  This book represented ten years of study and research, and which has remained ‘the’ authoritative reference for the last five decades.

Whilst William A. Townsend stood front and center in philatelic circles not just because of his work on that glamorous British colony, he was also a servant of the hobby being appointed the President of the Royal Philatelic Society in 1969 – their centenary year – and the same year signing the Roll of Distinguished Philatelists.

Two years before he was awarded The Tilleard Medal for his display on, yes you’ve guessed it, British Guiana. But Townsend was also involved with the grass roots, joining the British West Indies study circle as early as 1957, becoming its vice president in 1964, and was an active member of the Derby Philatelic Society during this period, when he also became a Fellow of the RPSL.

Townsend contributed articles on his favourite subject of British Guiana to The London Philatelist, and was an active member of the Philatelic Congress of Great Britain, and Chief Steward at the London 1960 International Exhibition, and a member of the jury at London 1970. It wouldn’t be right just to speak of Townsend’s philatelic credentials alone. Those who had the pleasure of his company and his contributions to the cause of stamps and postal history, describe him as calm, level-headed, affable and a man who was generous with his knowledge and eager to promote the hobby at all levels. Having said all that, it remains his immense influence upon one of the most talked about genres of stamp collecting that he will always be remembered and respected, especially for the advanced philatelist when cataloging and distinguishing stamps and usage of British Guiana. As such, we look to his middle name, Augustus, to define his title. William A. Townsend is The Philatelic Emperor. Certainly nobody would argue that he is the monarch of British Guiana.

Next time on Legendary Collectors should be our Philatelic Explorer J H Harvey Pirie, who we’ve promised for some months now. But with so much excitement surrounding British Guiana of late it was the ideal opportunity to ask Ackerman, du Pont and Townsend to jump the queue.