So we’ve rescued a fellow philatelist from exile and put to rights the dearth of stamp related matter on King Carol II, and now find ourselves featuring a man that there is an abundant sufficiency of material written. The trick here will be to sort the wheat from the chaff or in this case the cigarette from the ash, or as I’d prefer to say pluck out the mint bits from the already used stuff.

Because our next legendary collector is Maurice J. M. Burrus (1882 to 1959) an Alsatian philatelist who in keeping with our elite set of postage protagonists was a tobacco millionaire. Now like so many great philatelists Burrus lived in Switzerland and that’s a coincidence because we were only just talking about Alfred F. Lichtenstein (#22) the American who also filled his stamp albums in the clean clean air of the Alps. We often say at David Feldman SA; “the atmosphere in Switzerland is a very conducive environment for the world’s top-flight philatelists”, and these two greats seem to have agreed.

Now, let’s get the credentials out of the way so we can move onto some juicy stuff. Maurice Burrus was a mega-star stamp collector who is considered to be one of the greatest ever stamp collectors and who amassed one of the most comprehensive collections in scale and rarities seen in recent times. He was a member of the Académie de Philatélie for over 30 years, and like many of our legends he was invited to sign the Roll of Distinguished Philatelists which he duly did in 1955. And like our exiled King (#25) he featured on some proper postage stamps when he was commemorated on the Liechtenstein Post Office stamps, which sadly unlike our King Carol II Burrus didn’t get to see because they were issued in 1968. 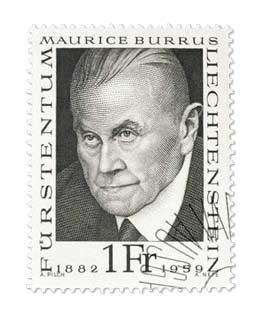 So, let’s hear from Burrus himself, which is a rare treat, on his definition of a stamp collector’s aim:

“to reassemble the whole of the stamps issued in one country, in a certain part of the world, or if possible, of the whole universe, and not to estimate the value of stamps according to their beauty of engraving or design.”

That came from a 1922 issue of The Philatelic Magazine and tells us Burrus was never satisfied until every space in his stamp album had been filled. That explains a lot about his insatiable appetite for buying stamps. Which is fine, because he had the money and the time to be exhaustive, and I hope you are wondering if he managed to fill every gap? You’re going to find out, but I warn you, if there is a gap in his collection it isn’t because of the reason you think. Spoiler alert, Burrus didn’t buy the British Guiana One-cent Magenta – a hole in his stamp album, shock, horror! That must have kept Burrus awake at night. Or did it?

So why did a self confessed completist not fill the most prestigious gap in his collection? It had nothing to do with money that’s for sure, and nothing to do with opportunity. You see, Burrus was the largest buyer at the Ferrary sales of 1921 to 1925 when it was there for the taking, and we know Burrus out-bid King George V and his Swiss neighbour Lichtenstein, as well as Hind and Caspary to many of the lots. And Burrus even picked up many of the items he didn’t win at those Ferrary sales when Arthur Hind’s collection was disposed of in 1933, although again not the British Guiana One-cent Magenta, which we already know Hind won at the Ferrary sale in 1921. And even when Hind’s wife was trying to off-load the stamp in 1935 first via an auctioneer, then later by private treaty, Burrus didn’t bite. In fact, he avoided it even though he bid Hind up to 300,000 French Francs in 1921, a fact Burrus admitted after the Ferrary sale and which he explained was because he’d overheard Hind’s agent Hugo Griebert in a restaurant boast that he had a limit from Hind of 300,000 Francs on the One-cent Magenta. Burrus had no intention of buying the stamp, a fact he attested to in later years on more than one occasion. It would appear that although Burrus who was an affable, likeable and by all accounts a lovely guy, he apparently didn’t suffer philatelic philistines gladly, and wanted to make sure Hind paid top whack for it. You see Burrus didn’t think the One-cent Magenta was genuine. He went on record as saying that he thought, after careful inspection under strong magnification, that it was a much cheaper British Guiana Four-cent Magenta that had been altered.  Burrus even got into a publicly printed spat about the authenticity of the world’s most expensive stamp, with Sir John Wilson, who is best known as the Keeper of the Royal Philatelic Collection (1938 to 1969) and President of The Royal Philatelic Society London at the time, and they disagreed with each other quite strongly, which is a matter that was never adequately settled between them.

But we are not here to judge such controversial matters and so you’ll have to contemplate what this was all about on your own time. And I’ve not even mentioned the Ponzi scheme run by Dr Paul Singer, the Irish-based Shanahan Stamp Auctions which is a philatelic scandal that our Mr Burrus unwittingly got embroiled in. That’s for another day.

We are here only to celebrate one of the world’s most complete stamp collectors, who even though he left a gap in his collection, it was a gap he could have filled if he wanted to. Maurice Burrus, The Philatelic Completist.