When organising this philatelic collection of legends there are occasions when one or two of the ‘books’ get shuffled out of sequence. Our incumbent John Walter Scott a point in case, when I’d confessed that it was my original intention to flick straight from Melville to Lindsay, but as Lindsay owes a great deal to a philatelist by the name of John Kerr Tiffany, who amassed a philatelic library so great that in 1890 he was regarded as the second most important person in US philately – second only to our English export and pioneer Scott, you see why we retraced our steps. 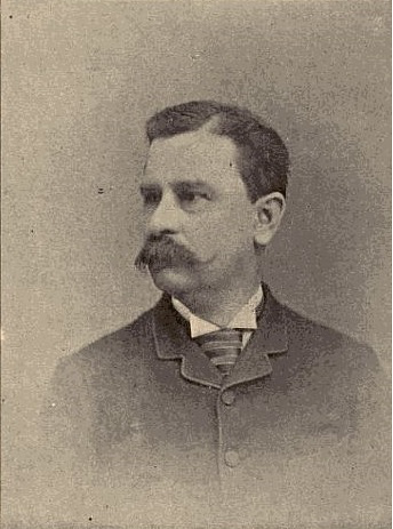 This slight change of order means we shall effectively take two books off the shelf in one sitting. So first things first, John Kerr Tiffany (1842 to 1897) was one of the earliest known American philatelists and was the first president of the American Philatelic Society, and those two facts together with his book collecting achievements earned him a place in 1941 on the American Philatelic Society Hall of Fame. Now whilst Tiffany was a stamp collector of the US and British North America, he’s really better known for being a bookworm. You see for reasons only known to Tiffany he set about collecting every printed matter (books) which had a connection to the hobby of philately. This resulted in Tiffany having what was described at the time as the world’s largest and most complete collection of philatelic literature. Not bad. And Tiffany’s escapades in the world of philatelic books did us all a great service ensuring we have a record of these early printings, some of them rarer than the stamps they detail, because as you are about to discover Tiffany’s books are now in the British Museum because Tiffany didn’t go unnoticed across the pond in England and our next legendary collector was already a recognised bibliophile and entrusted with expanding his family’s library.

Known officially as James Ludovic Lindsay, 26th Earl of Crawford (1847 to 1913), but better known to us as a British philatelist referred to as ‘Crawford’, he purchased Tiffany’s book collection and then went on to add to it and extend it. You have probably heard of ‘The Crawford Library’, and this is quite literally all the philatelic books Crawford amassed which after his death amounted to an enormous philatelic library and which was left to the British Museum. This means we can all appreciate the early work of Tiffany and the progress Crawford made thereafter.

Now this gargantuan and rather generous donation together with Crawford’s other philatelic exploits earned him a place on The Roll of Distinguished Philatelist in 1921 as one of the “Fathers of Philately”. And as we’ve mentioned a few times in these musings, The Crawford Medal, is an award given by the Royal Philatelic Society London in Crawford’s honour for distinguished contributions to the study and knowledge of philately if, fittingly, published in a book. Two of our past featured legendary collectors were winners of this award, namely Sir Edward Denny Bacon in 1921, and Charles Lanthrop Pack in 1923. And a future legend, who we’ll feature the legend after next, Charles Nissen, also won the award in 1922. Prestigious company indeed. And it is worth reminding readers that as noted in legendary collector #17 Denny Bacon compiled for Crawford ‘The Catalogue of the Philatelic Library of the Earl of Crawford’ which won Crawford a Gold Medal at the 1911 Vienna Philatelic Exhibition, this propelled Crawford to new philatelic heights.

But Crawford wasn’t just about books, and although it’s hard to separate the man from his bibliophil achievements, he was actually a classic collector and not as well known is that Crawford was in fact a great student of philately who formed important collections of Great Britain and its colonies, Egypt, US and Italian States. And in 1906 he was awarded the major prize for his exhibition of Great Britain. Crawford was also one of the first philatelists to pin any importance upon the study and collection of proofs, essays and artists drawings. He was also a servant in the hobby representing The Royal Philatelic Society London, and rising to the heights of President during 1910 and 1913. However, it would be wrong to refer to Crawford in any other way, not least because no one will ever surpass his achievements in the philatelic library, than to call James Ludovic Lindsay or “Crawford” to us, as our Philatelic Bibliophile.

In our next episode of legendary collectors we meet Alfred Lichtenstein, who heralds a new generation of great philatelists, who include Charles Niseen, Alfred Caspary, King Carol II and Maurice Burrus, who will follow Lichtenstein in that order during 2021.