So, I’m going to backtrack here because having brought you up to date with Frederick J Melville’s contribution to philately during the early to mid 1900’s, I was about to introduce you to James L Lindsay, the Earl of Crawford, but you can’t do that unless you at least mention John Kerr Tiffany, and by default you really shouldn’t be talking about Tiffany even if as a supporting act in a Crawford piece unless you have asked John Walter Scott (1845 to 1919) to pop in and have a cup of tea.

And you’d receive a warm and favourable response from Scott if you did ask him round for an English cupper, because although he is synonymous with American Philately – the Scott catalogue man – he was actually an English chap who immigrated to the US in search of gold. Lucky for us philatelists, and in particular the American’s among us, he wasn’t too good at finding gold and so employed his abundant business, creative and analytical talents in an ‘avantgarde’ manner in America dealing in the world of stamps.

Scott had much more success selling rare adhesives to collectors than prospecting for precious metals, and became a significant dealer in the US. As early as 1868 Scott began to catalogue stamps and published ‘A Descriptive Catalogue of America and Foreign Postage Stamps, Issued from 1840 to Date’. This developed into Scott becoming the leading stamp catalogue producer in America and by 1885 he was able to sell the rights to his Scott catalogue to the Calman brothers who renamed it the Scott Stamp and Coin Company. They recognised the influence his name carried. We all still do today, as illustrated by the featured 1901 10c Pan American Exposition ‘imprint’ plate block of six with the “Bureau, Engraving & Printing” and “1151” which is Scott catalogue #299.

Scott did many inventive things to develop the world of philately, such as produce a stamp album with pages with spaces for specific stamps, and he wrote philatelic literature and newsletters promoting the hobby and undertook these initiatives after selling the rights to his catalogues. Scott is affectionately known as “The Father of American Philately”, and he certainly conceived ways to innovate stamp collecting and stands out more than anyone as an adventurous and enterprising prospector of philately at that time. For example, Scott started what we know today as a stamp auction held in May 1870 in New York City. And went on to organise and conduct auctions in the US and even Europe after this. 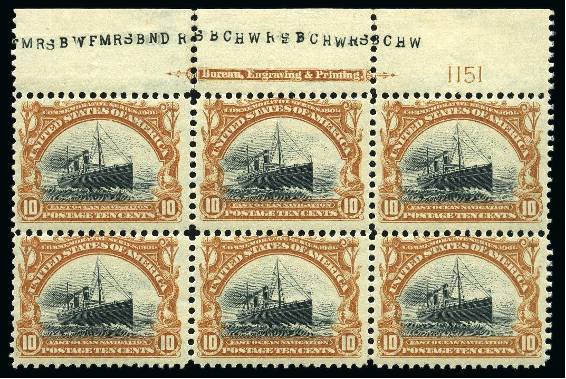 At David Feldman SA we appreciate that Scott was the first, in 1882, to produce an auction catalogue with full colour plates of the stamps available in the auction. Might seem basic now, but at the time this was a very expensive process and cutting-edge. And even more akin to our hearts at David Feldman is how Scott pushed the boundaries of the prices achieved for rare and unique stamps and whether folklore or fact there are some that claim Scott was the first philatelist to sell a stamp to a collector for over one thousand dollars. Given his achievements and his entrepreneurial spirit it is no surprise he was one of the founding members of the Collectors Club of New York 1896, and active in the American Philatelic Society where he was president from 1917 to 1919. Some might say it is a surprise he didn’t make The Roll of Distinguished Philatelists, but I guess that comes with the territory he occupied commercially. However, Scott was active in organising philatelic exhibitions and promoting the hobby, maybe these had a business edge to them and so earned him less credit, but it is hard to ignore what Scott achieved and one is left pondering what would the American philatelic landscape look like without the ‘imprint’ of Scott upon it.

Well, there would be one less name on the American Philatelic Society Hall of Fame, which Scott was added to in 1941. And the other obvious fact is that the Scott Catalogues continue to thrive today, which maintains Scott’s legacy, even if it’s actually an English guy who is the most well known name to all American stamp collectors. John Walter Scott a Philatelic Pioneer.