Having just given you two legends for the price of one, and confessed the error of my ways in sequencing this series, you might be glancing up at the name of our next legendary collector and thinking you’re in for another double-bubble. Well, you’d be wrong, because whilst most philatelic commentaries tend to write about Alfred F. Lichtenstein and his daughter Louise Boyd Dale together, that isn’t going to happen here.

Why? Firstly, because Lichtenstein was one of the most famous American philatelists, and secondly, he is one of the most legendary collectors of all time; so it wouldn’t be right for him to be sharing the stage with anyone, even if it is for another top flight philatelist and his own daughter to boot, who it has to be said was a chip-off the old-block. And, all good things come in threes, so thirdly, because Boyd Dale deserves her own place in all this philatelic awesomeness, so you’ll have to wait for her (Boyd Dale is #31) but without further ado, Alfred F. Liechtenstein (1876 to 1947) who, as we’ve noted, was American, but like many top philatelists he lived in Switzerland, and he was and still is one of the most respected and revered philatelists ever to grace this planet, and I don’t say that lightly, and in fact it is said by far wiser and much more distinctive philatelic minds than my own.

Now the simple truth here is that Lichtenstien had all the pedigree and attributes of a legend which you’ve come to expect. He was a very wealthy gentleman, and thus had access to the best material and he held in his collection many of the rarities of the world, and he acquired entire collections and material from many of the world’s most famous collectors some of whom we have presented thus far, such as Ferrary, Hind, Duveen and Pack.

And as you’d expect Lichtenstein after his sudden passing in 1947 was recognised by the American Philatelic Society by being added to their Hall of Fame list for the most important deceased philatelists in 1948, and in deference to the work during his lifetime, in 1952 the Collectors Club of New York, to which he was a founder member and past president, created an award called the Alfred F. Lichtenstein Memorial Award. 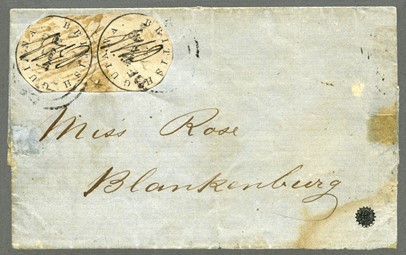 The Miss Rose Cover purchased by Lichtenstein at the Hind sale, who purchased it from the Duveen sale and sold in 2016 by David Feldman SA when it’s ‘Provenance’ included these three greats of the philatelic world.

And to give you some idea of the gravitas of the man whilst still alive Lichtenstein signed the Roll of Distinguished Philatelists in 1927, which is an enormous distinction for an American philatelist. Now the reality is that far from being a student Lichtenstein was actually a great scholar of philately and as well as winning the top international awards for his exhibits, he was an international judge over three decades, and the chairman of the International Philatelic Exhibition 1926 and then re-elected as jury chairman for the 1936 International. When he died Lichtenstein was preparing the Centenary International Stamp Exhibition (CIPEX) of 1947, and as part of that he was the American representative to the Royal Philatelic Society and went to England to help select portions of the Royal Philatelic Collection to be exhibited in New York at CIPEX in 1947. So you see, Lichtenstein was an absolute world class philatelist, who operated at the very highest level, and formed comprehensive and outstanding collections, mostly pre 1870, of the United States, Canadian, Mauritius, Switzerland, Cape Colony, Ceylon, Gambia, Argentina and Uruguay.

Any material exhibited, or in a David Feldman SA auction which has the ‘Provenance’ of “Lichtenstein” is universally heralded as one of the top world items and such is the power of his name in the philatelic world that it invokes a sense of awe and appreciation the world over. He was founder and chairman of the Philatelic Foundation and in 1945 he established their expert committee to deal with the ever increasing amount of fakes, modified items and altered philatelic material, which at the time often fooled even the most sophisticated philatelists. We could go on and on because the list is endless in Lichtenstein achievements and all the philatelic superlatives apply to him.

But one last tasty morsel which perhaps alludes to how important to him his latter work in fighting the darker arts of fraudsters of the philatelic realm. There is a famous Life Magazine pictorial of the world’s most rare stamps, it’s a well known colour spread and is often collected by philatelists as a timeless piece of philatelic memorabilia even today. What isn’t as well known is that many of Lichtenstein’s rarities were represented under the pseudonym “Atlaticus”. It’s not entirely clear why this was the case, but digging around in the philatelic undergrowth it would seem that Lichtenstein saw himself as the “American Shield-bearer”; Atlanticus Americanus, which is known as such, is a species of Tettigoniidae a grasshopper type insect. Intriguing don’t you think. And that suits because given how armourplated Alfred F. Lichtenstein’s achievements were to the world of philately, he is a worthy man to be The Philatelic Shield-bearer.

In our next episode of legendary collectors we meet Charles Nissen, who pips Alfred Caspary, and King Carol II who feature respectively during 2021.