It’s a common misconception that philately is a male dominated activity. Indeed, the history books tell us a different story, because there have been females collecting stamps since its inception back in the late 1850s, and the philatelic records illustrate there are many notable ladies who have assembled comprehensive and specialised collections over the last century. Now the featured item, which is a Cape of Good Hope Woodblock 1d Vermilion mint block of four, happens to demonstrate even more lucidly this illusion regarding female participation, because it sold at the most recent David Feldman SA Spring 2021 auction for £146’400’00, and if you take a closer look at the catalogue in which it was offered for sale, it tells you that the provenance of this rare stamp is ex Dale-Lichtenstein and Ad Indhusophon. 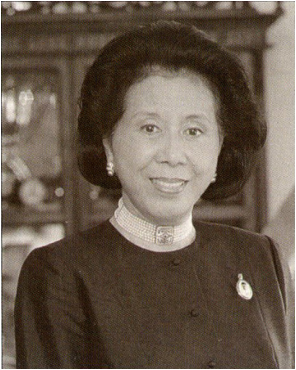 Now Louise Boyd-Dale and Boonkrong Ad Indhusophon are world famous female philatelists, and to have held such a valuable and rare item in their collections at one time, illustrates how serious their credentials are. Louise Boyd-Dale (1913 to 1967) is well known as a decorated exhibitor who was the daughter of legendary collector, Alfred F. Lichtenstein, and she most definitely was a chip off the old ‘block’, excuse the pun, and whilst on that topic, it was when her father passed away that she inherited this South African rarity.

Now Boyd-Dale will shortly be appearing in one of our Legendary Collectors articles (number 30), so let’s take the opportunity to learn more about ‘Ad’ – as she is known in philatelic circles – Indhusophon, who is a Thai philatelist, a Fellow of the Royal Philatelic Society London (FRPSL), and winner of the Grand Prix International in Toronto (1996) and at the International Philatelic Exhibition (IPEX) in 1998, for her Cape of Good Hope exhibit.

Ad is perhaps not as well known as Boyd-Dale, but her achievements and the level of her contribution to stamp collecting are very much on a par. Like Boyd-Dale, who signed the Roll of Distinguished Philatelists in 1956, Indhusophon was invited to sign the Roll in 2001. Interestingly, her late husband, Prakaipet Indhusophon (1929 to 1991) was also a top flight philatelist, who signed the Roll in 1989, and won numerous Gold medals for his exhibit of Siam, and was also awarded a Grand Prix d’Honneur at New Dehli in 1989. It is well documented that Ad Indhusophon’s interest in collecting began back in the 1970s and she travelled regularly, with her late husband, to international stamp exhibitions all around the world.

After his death she made the decision to follow through on an unfulfilled wish of her husbands and start a second collection, and this is when the Cape of Good Hope Triangles study began. As well as the Grand Prix awards, her Cape collection has also won several Gold medals, and a separate exhibit on Cape Revenues won a Gold medal at the IPEX show in 1998. And Ad Indhusophon has invested in the future of the hobby by establishing in 1993 a ‘Youth Corner’ in the Bangkok National Library, and through the ‘Prakaipet Foundation for Philately’ which she formed in the same year, youth philatelic events are regularly organised, including competitions and financial support provided to promote and develop the future of stamp collecting.  So, if anyone you know is under the misconception that philately is a male dominated hobby, then make sure you point out the achievements and contribution that Ad Indhusophon has made and the impact her name has on any Cape of Good Hope rarities which have the fortune of being described as ex Indhusophon. Anyone seriously studying the Cape Triangular stamps recognises that she is the Philatelic Lady of Good Hope.

Our legendary collectors series will be back as usual next time when we will meet the Philatelic Explorer J H Harvey Pirie.