The Italian Affair of Sān Mén Bay China, in 1899, might be an event some think insignificant and others may wish to forget, but if historians are correct then this brief diplomatic and military incident is actually a much more significant matter than it appears at first glance. And in our upcoming June Auction we have three covers from this historical moment in political history, which are the largest ever selection of material of its kind ever to be made available. These are a small part of; The Astolfi Collection of Italian Postal History Abroad, which is an assemblage that has many stories to tell of the Italian presence in China.  We take this opportunity to review a fundamental incident in the history of The Great Powers in China and highlight the importance of these three covers which are about to come to market.

There are moments in history when the events that unfold don’t appear to be that significant, and it is only later that the importance of a particular moment in time is revealed. One such incident is the almost forgotten Italian affair of Sān Mén Xiàn (March to December 1899), or Sān Mén Bay, which is in the Province of Zhèjiāng in China. Crucially this affair occurred just before the bloody Boxer Rebellion (October 1899 to September 1901), a conflict which claimed the lives of 100’000 civilian and military personnel, and involved all the major European powers of the time, who had a presence in China for strategic and political reasons.

The story goes that as a result of the diplomatic involvement of certain Great Powers in the 1894 to 1895 Sino-Japanese War, China was forced to provide certain ‘concessions’, one of which was giving Germany in 1898 the territory rights to Kiautschou Bay, in Shantung (now Shandong) China, on a 99 year lease. In that same year Italy wished to get involved in this process by claiming jurisdiction over the Sān Mén Bay for commercial purposes. The trouble was that Italy hadn’t been involved in the  Sino-Japanese diplomatic negotiations, and as such China rejected the Italian claim. This caused the Italian Government to send an ultimatum to the Chinese, and this ultimatum the Chinese chose to ignore. As a result, on 8 March 1899, the Italian Minister of Foreign Affairs, Vice Admiral Canevaro, as a show of power, ordered the Italian Military battleships ‘Marco Polo’ and ‘Elba’ to occupy the Sān Mén Bay in an attempt to force the Chinese to cede this area. Despite this show of aggression, China refused to change their position. The Italian’s eventually backed-down later that year when they realised that the United Kingdom would not support the Italian position. Now, although this might appear to be a storm in a small bay along the East China Sea, it is now thought that these events convinced the imperial Chinese government to alter their strategy towards the Colonial powers and to support the Boxers’ rebellion against the foreigners and the Christian religion. Previously their position was very much in support of the foreigners. As the history books inform us, this shift in support meant that the balance of political force changed and the Boxer Rebellion gathered momentum and this undoubtedly extended the duration of the conflict and increased the number of casualties on both sides.

So, the Italian Affair of Sān Mén Bay is a fascinating moment in history and although correspondence from this brief encounter, which was entrusted to local or foreign post offices, are extraordinarily rare, we have three covers caught up in this incident.

One of these is an 1899 CIP 1c postal stationery card, dated April 30th, sent to Bologna by an official of the “R. N. Elba” torpedo boat, posted at the Chefoo Chinese P.O., with previous application of China 1898 1c & 2c to pay the internal postage to Shanghai, tied by Large Dollar cds’s on dispatch, a Shangai bilingual transit at top dated 2 May, then entering the British P.O. in Hong Kong with an 1884 2c pair paying the foreign rate, and being tied by rare framed “I.P.O.” handstamp and small Shanghai cds (6 May), with the arrival cds tying part of the franking. It also features very interesting content that reads: “…we need to show the teeth to these Chinese filths, who by love or by force will ceed San Mun (…) in a few hours together with the Marco Polo we will head for Shanghai leaving this harbour“. This is thought to be the only known Chinese Imperial Post mixed franking directly related to the Sān Mén Bay affair.

Another unique 1899 Postcard from the Italian cruiser ‘Carlo Alberto’, was  sent during the Sān Mén Bay affair from Amoy to Venice, franked by Umberto 10c which is tied by “R. NAVE C. ALBERTO” cds. The “Carlo Alberto” and an another Italian Navy cruiser the “Liguria” replaced the “Marco Polo”, “Stromboli”, “Etna” and “Piemonte”, which were withdrawn in August and November 1899, and the “Carlo Alberto” became the new flagship of the small fleet of three ships (together with the “Elba”). As such this is an important item and an extremely rare mailing. No other examples are recorded  and there were no examples of this ship recorded in the Landini collection. 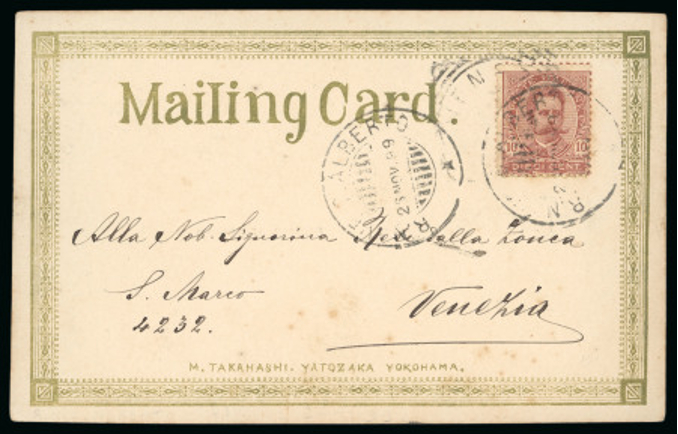 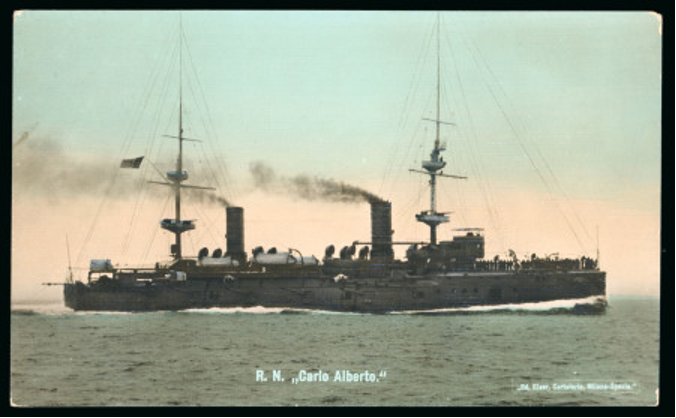 In this same auction offering is an 1899 rare correspondence sent during the Sān Mén Bay incident and forwarded through the Italian naval mail. It features the “Ra NAVE ELBA” cds – one of the key Italian battleships posted in the Bay. It is a cover with much to investigate being sent unfranked and with postage dues, but its content includes an extensive letter which gives a great insight into the predicament the Italian forces faced whilst stationed in the Sān Mén Bay. 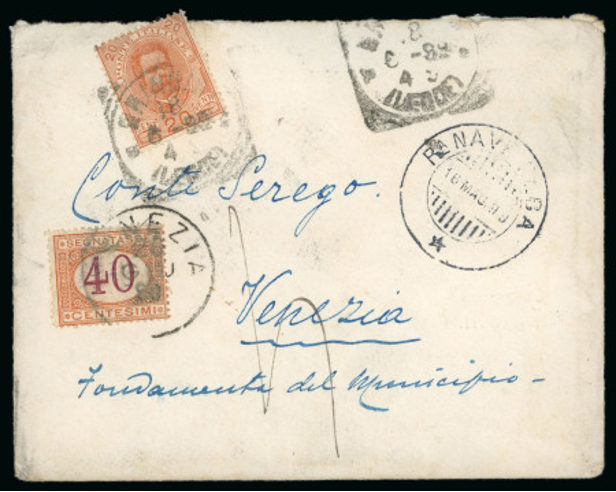 Here is a snippet of what it contains: “In Italy they have to be persuaded by something, and this is that China is a country with 400 million inhabitants and not the San Marino Republic, that this country does not fear us because it is not easy to beat it and that the greatest nonsense to be done is to occupy by the force -today after having wasted three months- the San Mun Bay. If this must be our objective, we will not even find a junk which will oppose us but basically we will not have obtained anything“. An extremely important cover showing a different usage to any others known by being forwarded through the Italian naval mail.

The Italian affair in Sān Mén Bay might be a forgotten incident, and much overshadowed by what subsequently unravelled during the Boxer Rebellion. But it is a significant period in the Italian presence in China, as a pivotal period in world history, and our upcoming auction presents three vivid snapshots into a diplomatic and military incident that arguably altered history.

If you would like to be a part of our June auction series then please do not hesitate to contact us via email or telephone. You can visit our website to discover the benefits of selling at auction with David Feldman SA and a step-by-step process of how to consign your stamp collection. The deadline for consignments is 1st April 2022.