Is Velcro Useful to Philately?

George de Mestral (1907 to 1990), a Swiss engineer, is famous for inventing Velcro – the two component hook and loop fastener – which are today found in all sorts of clothing, shoes, wall hangers, medical apparel, transportation, sports wear and their accessories and many other applications. The name Velcro is a portmanteau derived from the French words ‘velour’ and ‘crochet’ – meaning ‘velvet hook’. Apparently, de Mestral’s inventive skills began early, and by the age of twelve he designed a toy airplane and gained a patent for it. And indeed he received his patent for Velcro in 1955. Velcro today is still highly successful, and we’d all agree is very ‘useful’. 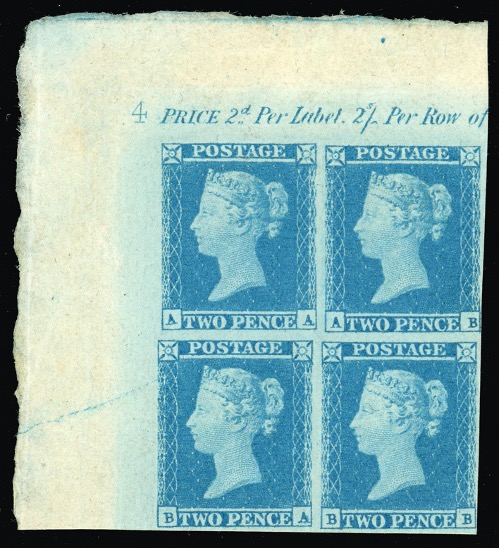 Now, as far as I can tell, George de Mestral wasn’t a philatelist. Certainly not a world renowned one, if even a stamp collector in any shape or form. However, Sir Cyril Humphrey Cripps (1915 to 2000) was a notable philatelist, and world renowned for the collection he assembled. If his name doesn’t ring any bells, then you’ve no doubt heard of the ‘Chartwell Collection’, which describes the contents of 84 stamp albums he amassed in his lifetime, which were sold in 2011, and included some of the world’s rarest stamps and postal history.

The two featured items here were once in Sir Cripps’ collection. The proof in black, illustrated at top, of the Two Pence 1840 Trials for the new design with the value blocked out is a key item in the story of the evolution of the Line Engraved issues; and the 1841 2d corner marginal block showing the plate number 4, of the final design of this issue, the 2d Blue with white lines, is one of the finest examples in existence, and thus a highly important exhibition piece.

It’s often said that Sir Humphrey Cripps had an eye for important pieces, and his collection as such was full of outstanding quality and rarity. In fact, the provenance “Ex Chartwell” is synonymous with superb material. The term ‘eye candy’ is commonly used to describe many of the stand-out pieces he procured.

Sir Cripps was also a philanthropist, who gave large sums to charity and made big donations to hospitals, universities, colleges, schools, churches, and museums. The financial means to be so charitable came from a family business set up by his father, which initially made parts for pianos – Pianoforte Supplies Limited. This company grew when it developed parts for the motor industry. However, in the 1970’s a decline in these main business activities meant that Cripps, who had become the managing director of the family firm in 1960, had to turn his eye to alternative business ventures.

Fortunately for the family business, as we’ve already said, Sir Cripps had an eye for important pieces, as our two featured items attest – individual items which also fit nicely together. Now, hopefully you’re wondering what the connection is between the two gentlemen sketched out above – namely George de Mestral and Sir Cyril Humphrey Cripps. If so, this is where the two are joined usefully together. Apparently, Sir Cripps spotted the potential in Velcro some time before it was really taken seriously and had a commercial interest, which proved astute and ultimately enabled Cripps to maintain his business and philanthropic activities – that is to say providing the financial means. It no doubt meant that his philatelic acquisitions were maintained also, which his collection is testimony.

So you see, George de Mestral, the Velcro man from Switzerland, has a ‘material’ connection with philately, without being a philatelist of any repute. And Sir Cyril Humphrey Cripps, the businessman from Northamptonshire, who formed one of the finest stamp collections of the twenty first century, is connected with George de Mestral’s ‘velvet hook’ invention. But, the two gentlemen stand on their own merits in history, it’s just they have been neatly joined here for philately, because it is very ‘useful’.

The two items illustrated above are available through David Feldman SA via Private Treaty, along with other superb items. Contact us or visit our website for more details.