175th Anniversary of the Basel Dove

The Basel Dove celebrated its 175th anniversary on July 1st this year. An exhibition in Basel planned to celebrate this momentous occasion in Swiss and indeed World philately earlier this month, but unfortunately had to be cancelled due to the developing Covid-19 situation in Switzerland. It was momentous not just because Basel was only the fifth postal authority in the world to produce a stamp for pre-paid postage, but also because it was the first tri-coloured stamp and the first embossed stamp in the world. An amazing technical achievement at the time, and as far as I’m aware, the only tri-coloured stamp issued in the 19th Century.

At the time, each canton (a member state of the Swiss Confederation, such as Basel, Geneva, Zurich, etc.) was responsible for its own postal service. And on 21st January 1843, a special three-man commission was appointed to consider and report on a motion concerning “etiquettes-franco” for the town post and the improvement of the postal distribution. Ten day later, the commission reported that, based on the English model, the use of letter boxes for local messages would be greatly facilitated by the prior sale of stamps. They even provided details for a design very similar to that eventually adopted. But it wasn’t until 11 months later that the subject was deliberated by the Postal Commission and a recommendation formally made for the introduction of 1 kreuzer (2 1/2 rappen) stamp for letters weighing up to 1 lot (15.5g).

The stamp was designed by the architect Melchior Berri, and features a white dove embossed on a field of red and carrying a letter in its beak, with Bishop’s crosier turned to the left at top (the Basel Coat of Arms). Berri also designed the decorative letterboxes for the city which show the same image and several of which are still in use.

The design was engraved in copper and was relief (letterpress) printed by H.B. Krebs of Frankfurt on thick yellowish-white wove paper in sheets of 40 (5 rows of 8 stamps). There were two printings, the first in 1845 of 522 sheets and the second in 1847 of 515 sheets; a total of 41’480 stamps. Although it is not known how many were sold. 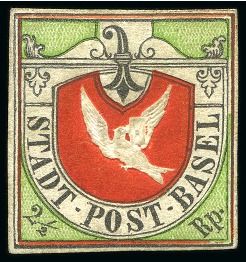 The Basel Dove exists with the central shield in brick-red and the network in the spandrels printed in green instead of blue. Such examples come from a proof sheet. Their status is known because a multiple exists bearing a manuscript notation by Melchior Berri, to the effect that they were tokens of the stamps introduced on 1st July 1945 and ordered by him and received from Krebs in Frankfurt on Main. The example illustrated above is lot 30036 in our December 2020 auction series.

In the announcement in the “Allgemeines Itelligenzblatt der Stadt Basel” the day before the issue on 30th June 1845, it was stated that they must be placed at the upper left corner and on the address side. Most covers in existence follow this rule but many covers can be found with the stamp placed in the other corners and sometimes even at an angle, sideways or upside down! The example above was placed according to the regulations, and is lot 30035 in our upcoming December 2020 auction series.

Browse all the Swiss lots

A range of cancels are known on the Basel Dove stamps, some of which are very rare. These include Basel double-circle ds, “PP”, “PD”, “L B / P h” (very rare) and “FRANCO” handstamps, as well as barred diamond obliterators. One example of the “FRANCO” hs has a double-lined frame in black and the example illustrated adjacent is lot 30031 in our upcoming December 2020 auction series. It’s a rare example.

Somehow, the Basel Dove failed to catch the imagination of the public at the time, although it is certainly appreciated by collectors today. It was valid for use until 30 September 1854, even after the establishment of a countrywide postal service on 1st January 1849 and the first Federal stamps in July 1850.

Our December 2020 auction series features over 250 lots of Switzerland. The descriptions are in German, but if anyone who’s interested in collecting Swiss stamps would like English translations are more information about the stamps on offer then please do not hesitate to contact us.