Just imagine you’ve received an envelope with a letter inside that would incriminate you and the sender. What would you do? Would you burn it? That seems the most sensible action to take. Burn it and the incriminating cover is gone forever. No need to worry anymore.

Surely keeping the compromising envelope wouldn’t do any good, would it? And hiding it in a sewing box doesn’t sound very sensible. However, that’s exactly what Janette Brown, the recipient of our featured cover did when she received it from James Hoof, back in November 1847. Incredibly, by slipping the compromising cover inside her sewing box she was also disobeying the explicit instructions given to her by James Hoof, who wrote at the end of the letter; “Burn as usual”. The facts are clear. The envelope and its contents were intended to be burnt once the recipient had concluded reading the incriminating material. But she didn’t burn it.

And aren’t we glad she didn’t. The envelope, now world renowned, is known as ‘The USA Alexandria “Blue Boy” cover’ and sold in a David Feldman SA rarity auction in 1981 for 1’000’000 US$ – a record for the highest price ever paid for a cover of United States philately.

Why so valuable? It is the only surviving stamp in ‘blue’ from an extraordinarily rare issue of the USA Postmasters’ Provisionals produced in Alexandria, DC, in 1846. 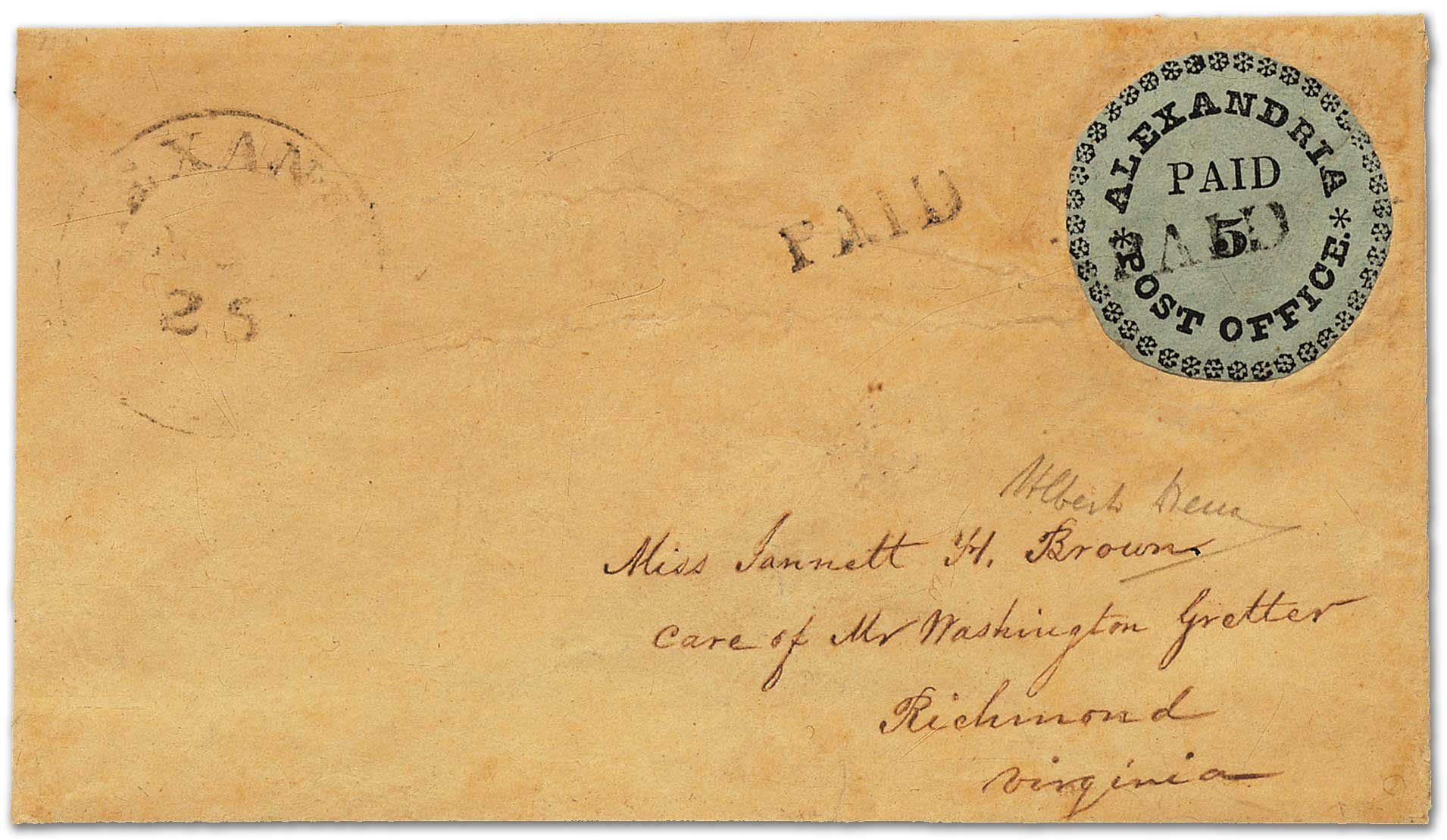 Whilst there are a modest seven examples from this issue known, the other six are all printed on buff-coloured paper – the ‘Blue Boy’ is the only stamp that has survived which is printed on ‘blue’ paper.

Whilst a cover selling for $1m and being the only surviving example of its type, is the real story, it isn’t the only story that needs to be told here, not least because without the actions of Janette Brown, or lack of action depending upon your viewpoint, we wouldn’t even know there was a USA 1846 5c blue Postmasters’ Provisional Issue. The sender, James Hoof, wrote to Janette Brown against the wishes of her family. You see, she was his second cousin, and as such their relationship was not approved of, and so James Hoof covertly wrote to Janette, sending the envelope via a friend Washington Gretter, and wisely advised Janette at the close of his handwritten communication to ‘burn as usual’ the evidence of his contact.

But love being what love is, Janette clearly couldn’t bring herself to burn the ‘blue boy’ and romantically 50 years later the envelope was discovered in her sewing box by Mrs Fawcett, who was the daughter of Janette and James Hoof – yes they were married six years after the letter was sent – and among her mother’s correspondence the blue boy was thus discovered. Mrs Fawcett, being as sentimental as her Mother, retained the letter, but clearly recognising that the envelope must be valuable, promptly sold it to a famous USA collector George Worthington, who reportedly paid the handsome sum of $3,000 in 1907 for what is a unique cover.

Since then the Alexandria ‘Blue Boy’ has enjoyed several glamorous relationships with some of the most eligible collectors and renowned dealers in history. Alfred H. Caspary held the cover in his collection from 1922, and in 1955 it was sold to Josiah K. Lilly for $10,000, before John R. Boker Jr paid $18,500 for it in 1967. Between 1971, when Boker exchanged the cover for some German States material with Renato Mondolfo, the eventual buyer of the remaining Burrus collections. In a further exchange in 1975, David Feldman acquired the cover for 350’000 Swiss Francs, before being sold again in May 1981 for the world record price of $1m USD to Erivan Haub, who formed one of the best collections ever of USA.

The irony here is, that to Janette Brown the most valuable thing about the envelope was what was inside it. To her the ‘blue boy’ was inconsequential and had nothing to do with her reasons for disobeying her lover’s instruction to ‘burn’ it. Yet, to our famous collectors, and us and indeed the wider world, the most valuable thing about the envelope is what’s on the outside of it, the ‘blue boy’; the letter, or indeed who had sent it, being unimportant and nothing to do with the reason why we wouldn’t burn it.

This article began by wondering if the most sensible thing to do with an incriminating cover would be to burn it. But we find that we end the article with the fact that we’d all do precisely the same thing as Janette Brown did in 1847. We’d keep the ‘incriminating cover’. I guess the morale here is, it doesn’t matter what makes something valuable, even if it is incriminating, you should never burn it.

See how you can become involved with David Feldman SA in partnering with Médecins Sans Frontières in its fight against Covid-19 through our RARITIES OF THE WORLD AUCTION in December 2020.