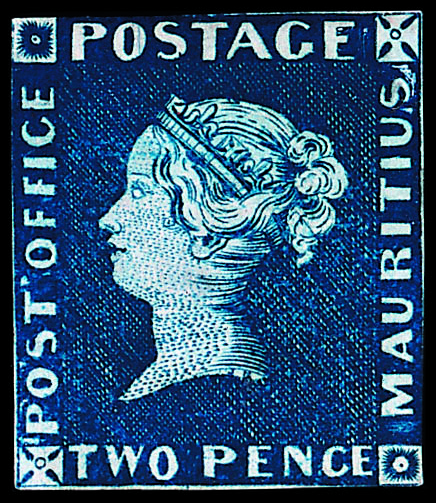 Issued in September 1847, this issue holds the distinction of being the first government issue of any British Colony (the famous “Lady McLeod” of Trinidad, issued earlier in April 1847, was a private issue tolerated but not authorised by the government). The issue was also only the fifth to be issued world-wide !

That September, Lady Gomm, wife of the Governor, planned to hold a Ball which would bring together both the French and the British communities of the island. As she wished to send prepaid invitations to all, she requested her husband to have some postage stamps prepared.

Once approved, the task fell to a local watchmaker and engraver, J.O. Barnard, who used a design of Queen Victoria’s profile based on Heath’s engravings, centred in a frame with inscription all around, including the words “POST OFFICE” by mistake for the correct “POST PAID.” Barnard engraved only one of each value on the reverse of a small copper plate which had been used for a lady’s visiting card. The plate was rediscovered in 1912 and has recently been found among items in the estate of the daughter of Maurice Burrus (see separate article). 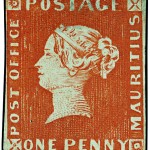 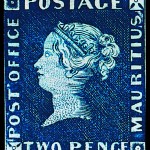 Only 500 of each value were printed, in vermilion red for the 1d value and in blue for the 2d. The stamps were almost immediately sold out. The day of issue is thought to be September 21, 1847, the day the invitations to Lady Gomm’s Ball were sent out. The issue was not “discovered” by philatelists until 1864 – seventeen years after its issue and use.

If one takes the rule of thumb that about 3% of classic issues have survived, this would give 15 of each value likely to exist. In fact, Kanai’s book on these issues traced 15 of the 1d and only 12 of the 2d, and of these, two 1d and four 2d were apparently unused. Six covers containing these stamps (three 1d single frankings, one 2d single franking, the 1d + 2d mixed franking to Bordeaux, and the “Bombay” cover with two 1d to Bombay), plus a large piece with the 2d, are reported to have survived.

Many of the surviving “Post Office” stamps and covers are now part of museum collections (and the GB Royal Collection) – some for over 100 years. A previously unrecorded 2d Blue was recently discovered and sold. The list of private owners of these stamps and covers is truly a “who’s who” of philately, and when one is offered, the whole of philately takes notice, curious about the prospective buyer – and the final price !