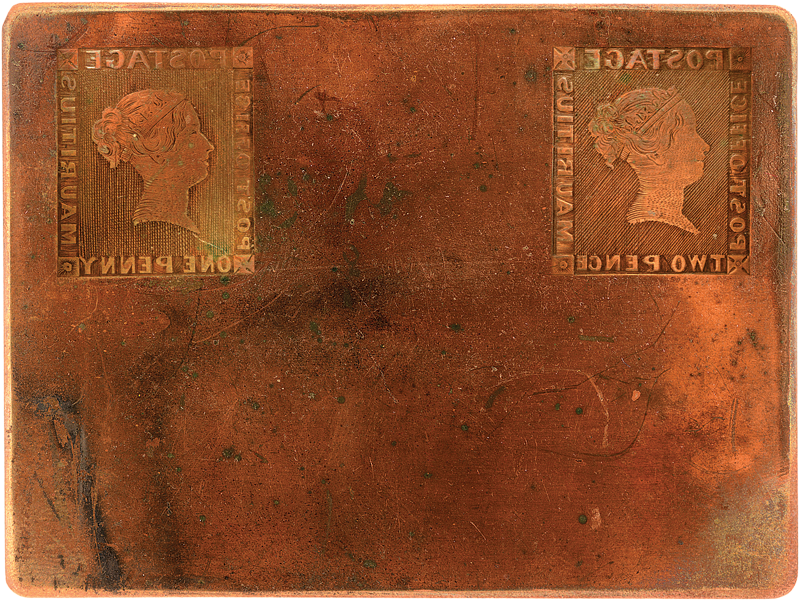 The copper printing plate for the famous 1847 “POST OFFICE” 1d and 2d stamps has been found after 80 years and will be displayed at LONDON 2015, EUROPHILEX which will be held at the Business Design Centre, London N1 from 13 – 16 May 2015.

The Mauritius “POST OFFICE” stamps were the first colonial issues of the British Empire and rank among the world’s greatest and most sought-after rarities.

The printing plate disappeared from view for many years and was rediscovered in 1912 when it was described by Alexander J. Sefi in 1912 as “the Greatest Philatelic Treasure existing”. It was acquired by Maurice Burrus around 1930 and was last displayed at the 1935 Silver Jubilee exhibition of the Royal Philatelic Society in London.

It then disappeared from view and for many years it was feared that it had been lost.

However, following the death of Odile Burrus, the niece of Maurice, the plate was re-discovered by the Burrus family and has been entrusted to the care of David Feldman S.A., of Geneva, so that it may again be displayed in public.

David Feldman stated that “handling the sale of the great MAURITIUS collection in 1993 belonging to Hiroyuki Kanai was no doubt the summit of my philatelic career, but there was always one missing item from this collection : the famous Post Office printing plate. What had become of the item and its location was a mystery since Maurice Burrus acquired it privately in 1930. It is at last a great honour and privilege to be able to handle this most elusive item!”

To know more about the plate, we invite you to visit the dedicated website.

Feel free to contact us if you have any questions.