In the world of philately it can sometimes be easy to take for granted the wonderful array of stamps we have to study and enjoy. Often we appreciate the elegance and rarity of a particular set of stamps but perhaps don’t really know how they came about or their significance. One set of stamps which is often not fully appreciated are the intriguing surcharged 1898 Spanish colonial stamps of Puerto Principe, which feature in our upcoming auction of the Jack Thompson collection. In order to understand their importance we need to look a bit closer at their emergence and use, which fittingly starts with the city of Puerto Príncipe being occupied by the American troops on 24 November 1898. As the American issues for Cuba were not available yet, and following the suggestion of the Administrator of the Post in Puerto Príncipe (General Lope Recio Loynaz), the Governor of the Province of Camagüey, U.S. Army Brigadier General Louis H. Carpenter approved a provisional issue for Puerto Príncipe by surcharging low denominations of the 1898 “Autonomía” stamps for Cuba.

These stamps were surcharged at the local newspaper plant (Las Dos Republicas) during the night for security reasons, using a flatbed press, and were surcharged in horizontal strips of five stamps reading “HABILITADO /(value) /cents.” in three rows. There were five printings, the first one was executed on 9.12.1898, the second and the third ones on 24.12, the fourth one on 27.12 and the fifth on 11.1.1899. These five distinct printings have over time been reconstructed by specialists and collectors, creating a captivating area of study and an array of scarce and valuable stamps. The Scott specialised and Edifil catalogues illustrate and outline their characteristics in detail. Due to the poor lighting conditions at the time of their production and limitations with equipment, in addition to the five specifications, several errors exist, some of which are rare. The errors include; inverted surcharges, double surcharges, pairs with one stamp missing the surcharge, vertical surcharges and “eents” instead of “cents” and some of these varieties appear in combination with others. The postal history is also of great scarcity, as the usage of this issue was only for one month, between 19.12.1898 and 20.1.1899, when the U.S. issues for Cuba arrived.

If we consider the circumstances surrounding the Puerto Príncipe stamps, including the provisional nature of the issue, its usage confined to few localities in Cuba, the very interesting study and classification of the various printings as well as the very short period of usage, this is a field of great fascination. As a matter of fact, it has attracted the interest of some of the most renowned philatelists in history such as Philippe Ferrari de la Renotière, Arthur Hind and Josiah K. Lilly, who possessed remarkable assemblies of Puerto Príncipe. The Jack Thompson collection is the most significant assembly ever formed on the Puerto Príncipe issue, comprising items originating from the most important past former collectors of this territory, including Henry G. Brock, Ferrars H. Tows, John C. Juhring, Peter A. Robertson, Ignacio Prats and Yamil H. Kouri Jr. 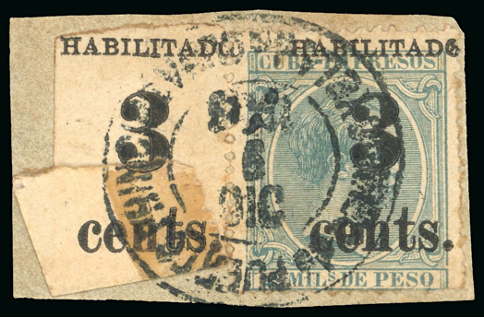 1898 5c on 1c black-violet, fourth printing, pair, position 3 and 4, with surcharge printed on blank gutter, used and tied to a piece 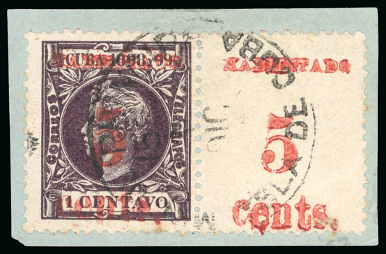 In conclusion, these are some of the most intriguing stamps to emerge from the Spanish-American War and the auction of such a selection of these in one offering is a unique opportunity to obtain rarities from this enchanting provisional issue and which is unlikely to ever be repeated on this scale ever again.