Below is part 1 of our collectors’ guide to the stamps of the 1924 Paris Olympics, which features items from our previous and more importantly our upcoming auction series on June 13th-17th 2022.

At the 1921 IOC Session in Lausanne, the French Olympic Committee  were awarded the Games of 1924. They were to take place in the suburbs of Paris, in Colombes, where a 60’000 seater stadium was to be constructed along with a village for 2’000 athletes.

In 1923, the Olympic Committee asked the French Post Office to issue a set of commemorative postage stamps (up until then they had never issued commemorative issues). They agreed but didn’t accept responsibility for the costs of their production. The National Assembly agreed the issue on 28th December 1923. Fig. 1 shows a group of Parliamentary bills which proposed the issue of commemorative stamps for the Games of temporary validity (as they had been in 1896 and 1920) which required a new law. They also stipulate that the Olympic Committee has undertaken to bear the costs of the essays and engraving by Mr. Becker, and the cost of printing them shall be borne by the P.T.T as the “costs of printing are negligible in view of the additional revenue from selling the stamps to collectors”. The designs chosen by the Olympic Committee were to be submitted for approval to the Under-Secretariat of the P.T.T. as well as parliamentary committees.

On 17th January 1924, the new law was passed that allowed the release of special issues but only for a limited duration of sale of no more than four months. Hence the Olympic commemoratives were all withdrawn from circulation on July 31st 1924 and demonetized on September 30th 1924, after which the reserve and unsold stock was to be destroyed. 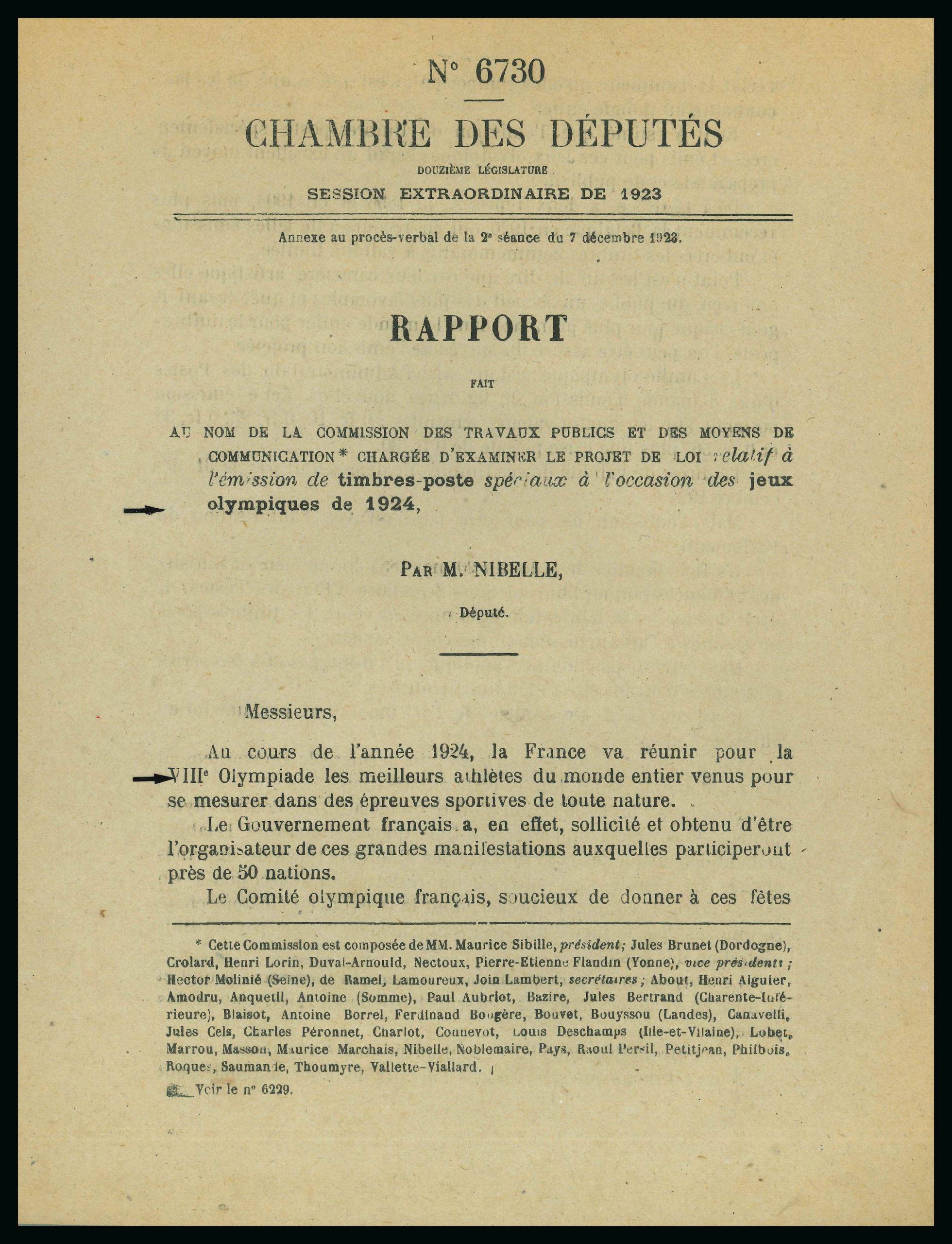 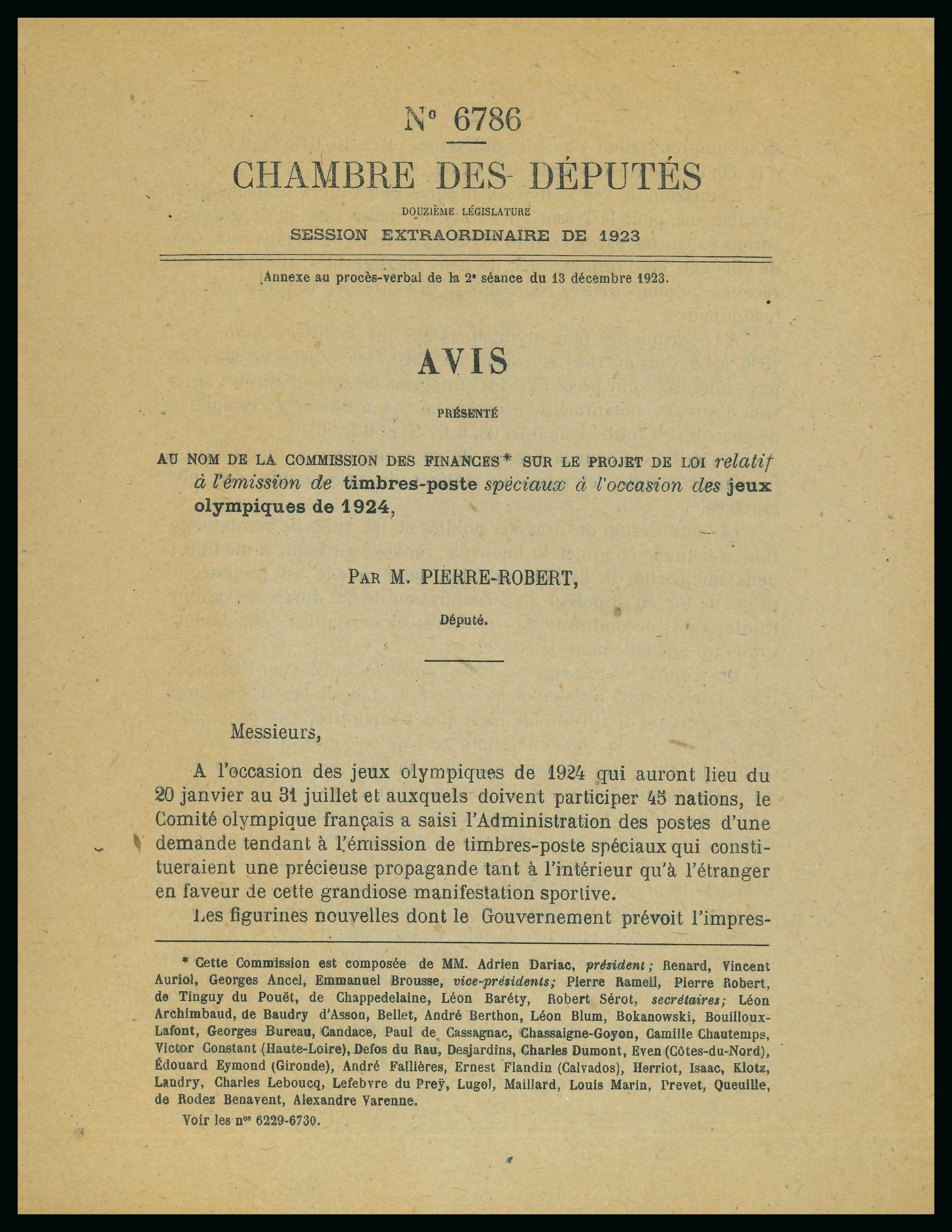 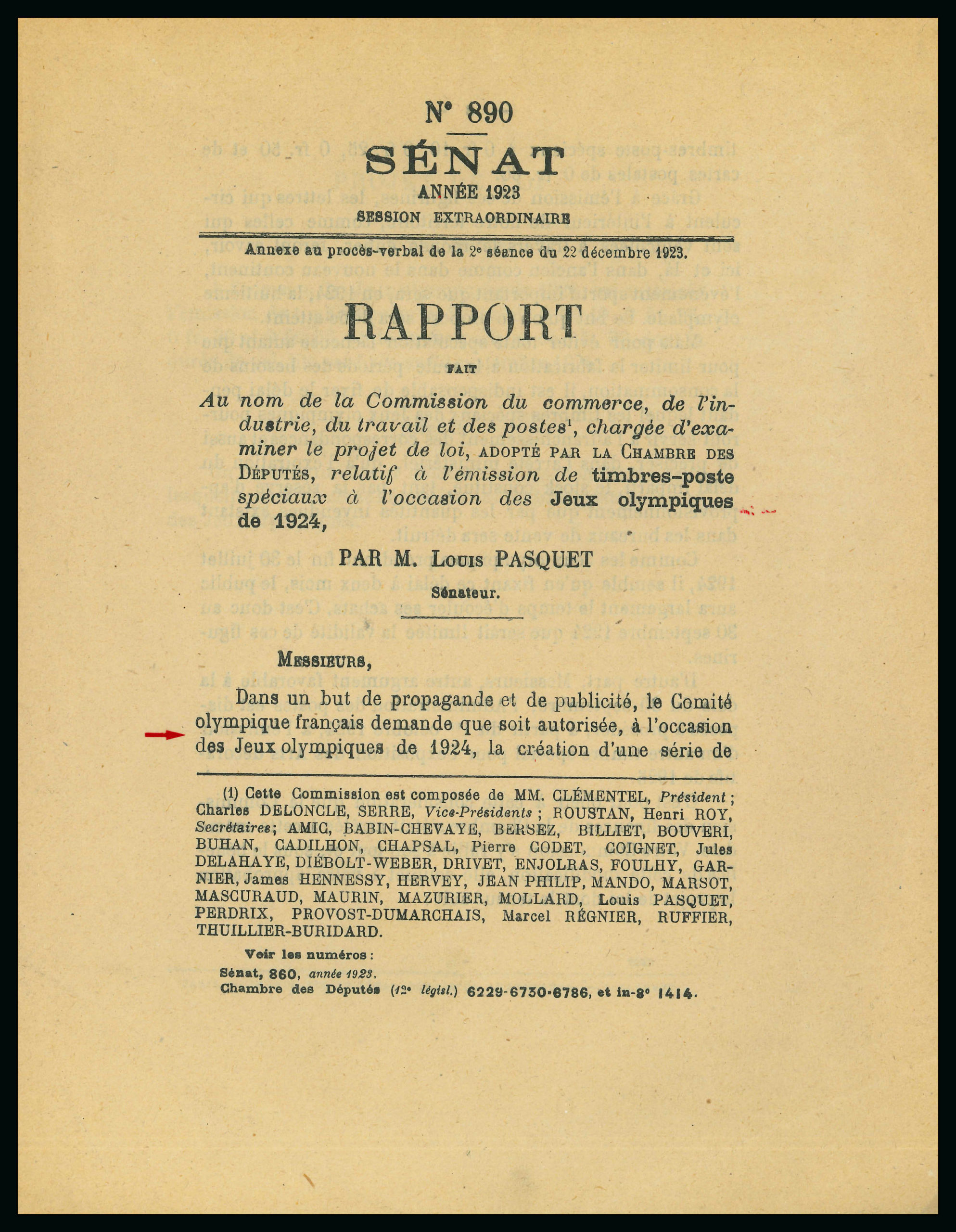 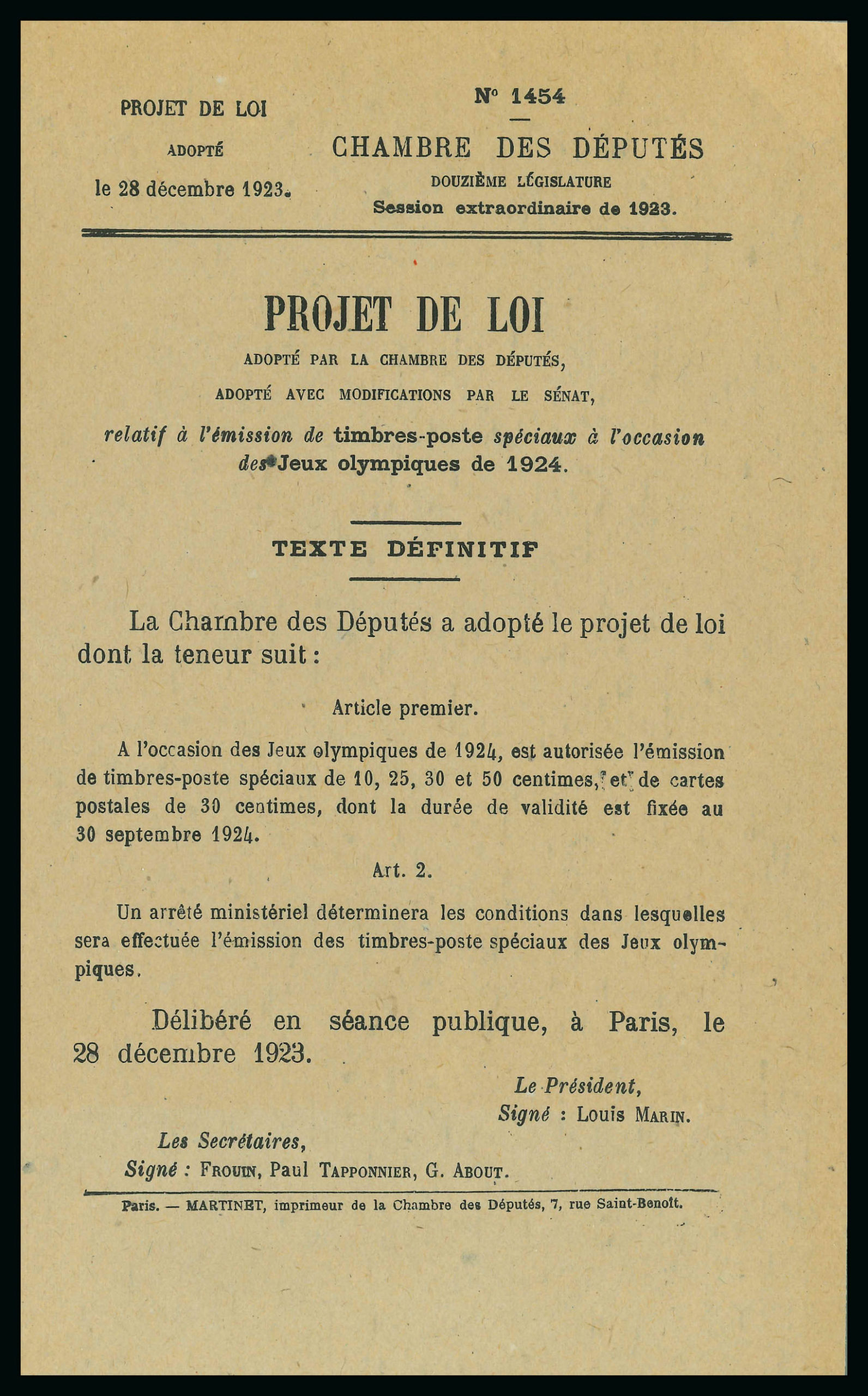 Fig.1: Four parliamentary bills about the issue of the 1924 Paris Olympics set, which will be sold as one lot in our June 13th-17th auction series. These bills defined the limited usage of the stamps, the values to be issued (including the postcard) and that the Olympic Committee would finance their design and engraving.

Several preparatory hand illustrated essays made by Edmund Becker exist on the market, many of which we sold in our December 2021 auction series from the Manfred Bergman collection. The earliest preparatory work, in fig.2, includes an enlarged ink and pencil essay by Becker showing an laurel-crowned athlete performing the Olympic salute above the Olympic stadium. This and two other essays were then used to create stamp-sized photographic reproductions with simulated perforations cut by hand and a card with each of the designs affixed and signed by Becker was sold in our December 2021 auction series (fig.3). Note that all the values are 25c and are close in design to the issued 10c, 25c and 50c. They also exist as individual photographic essays in brown and blue. 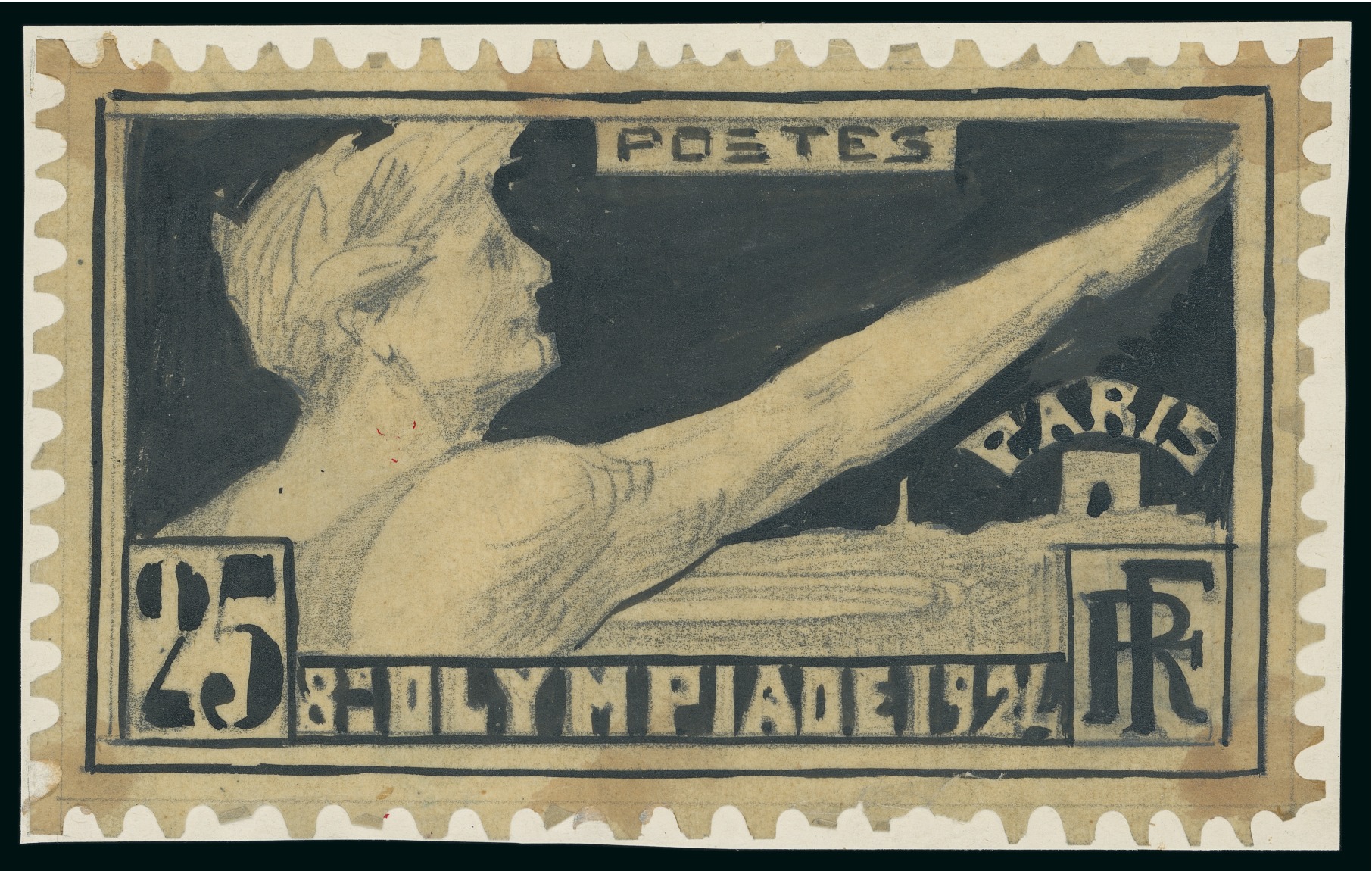 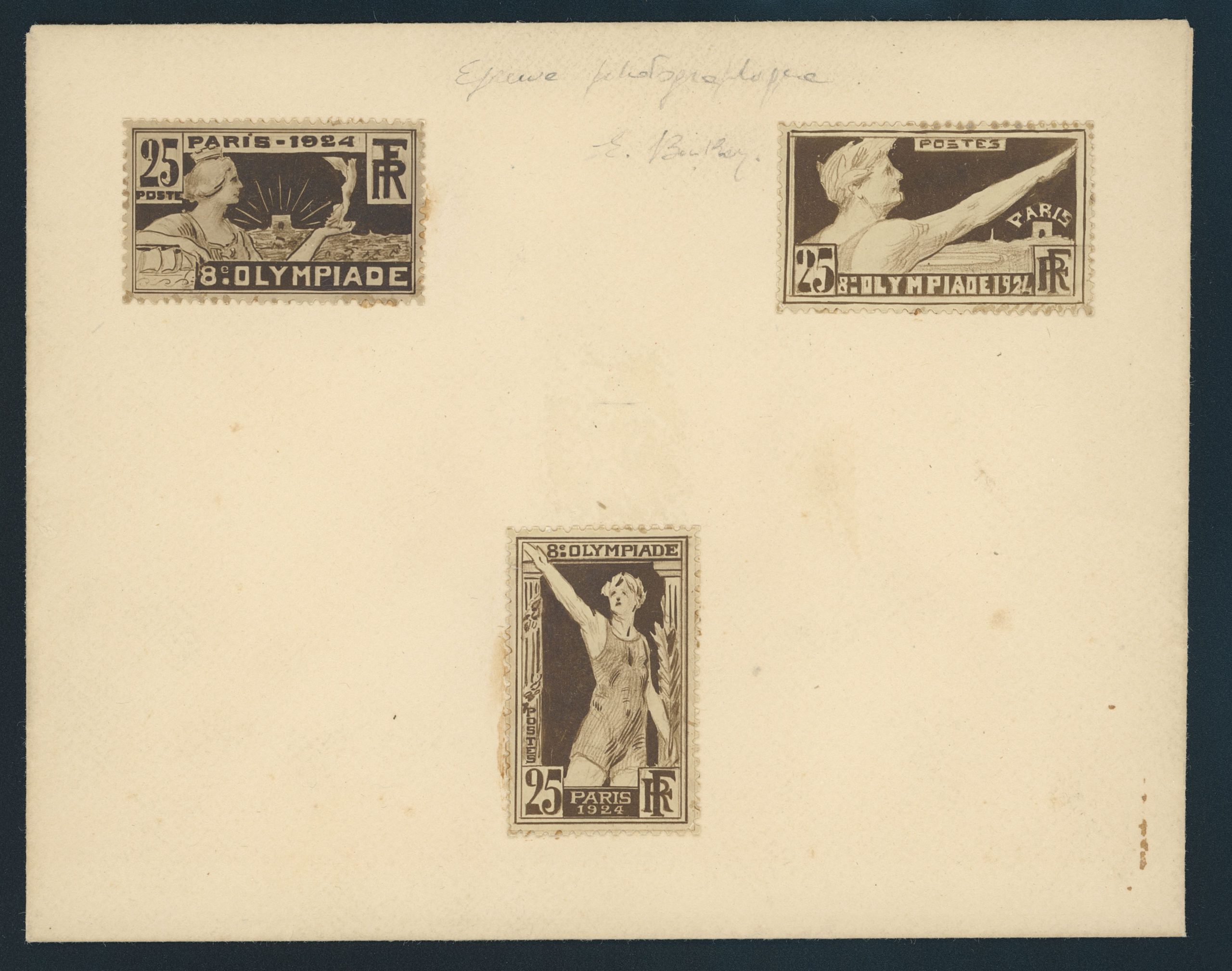 The 10c value: The next state of design known is an essay in crayon and watercolour in green (fig.4). The major changes from the initial essay in fig.2 was the the value and the change in the view of the stadium in the background.

This is followed by the essay in fig.5 in black ink and pencil. The main change between the previous essay was the word “POSTES” which is now placed about the value. This essay also has several pencil annotations in the margins which explains the change in design for the next essay and also notes the intended colours for the issued stamp. 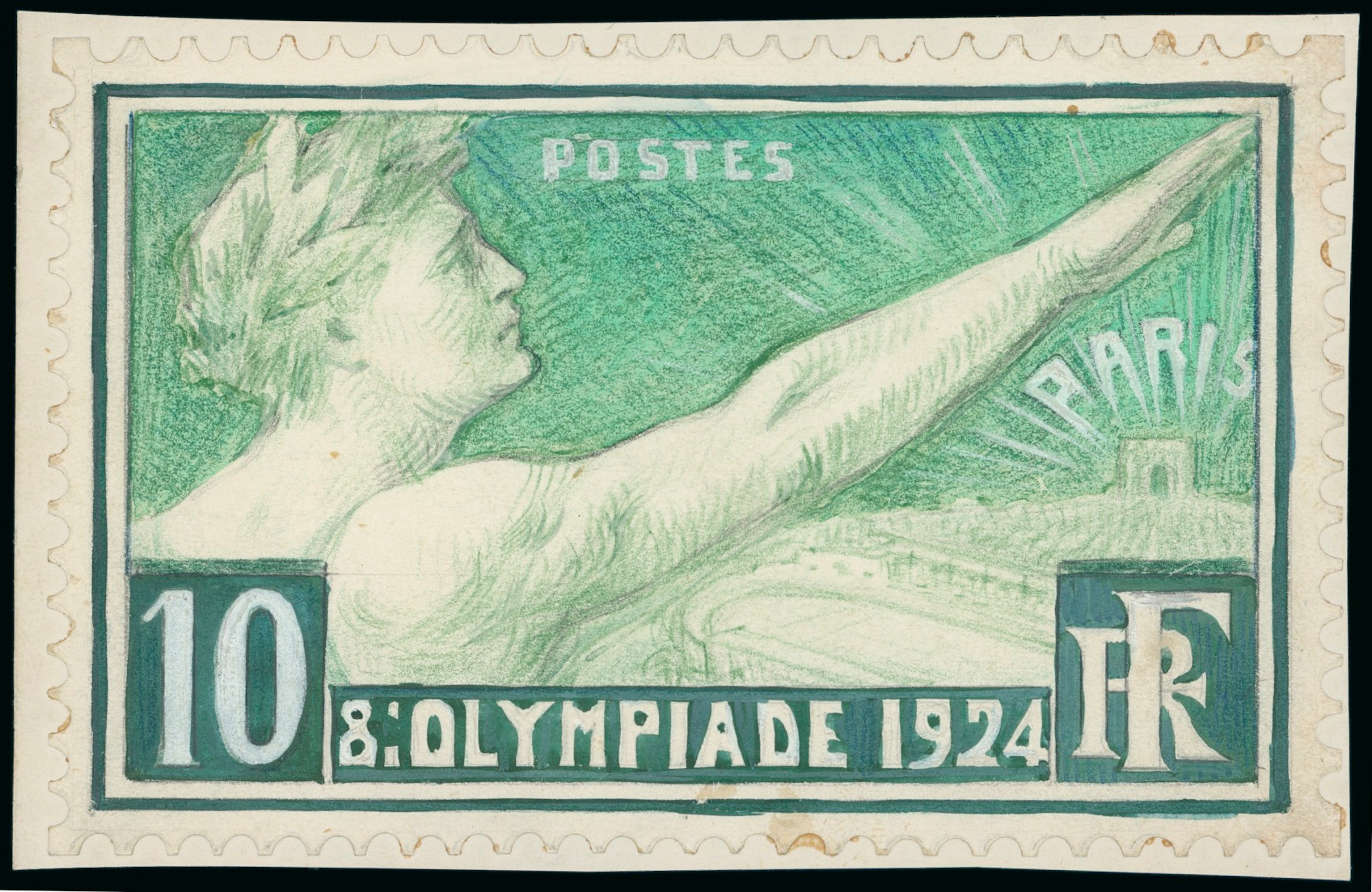 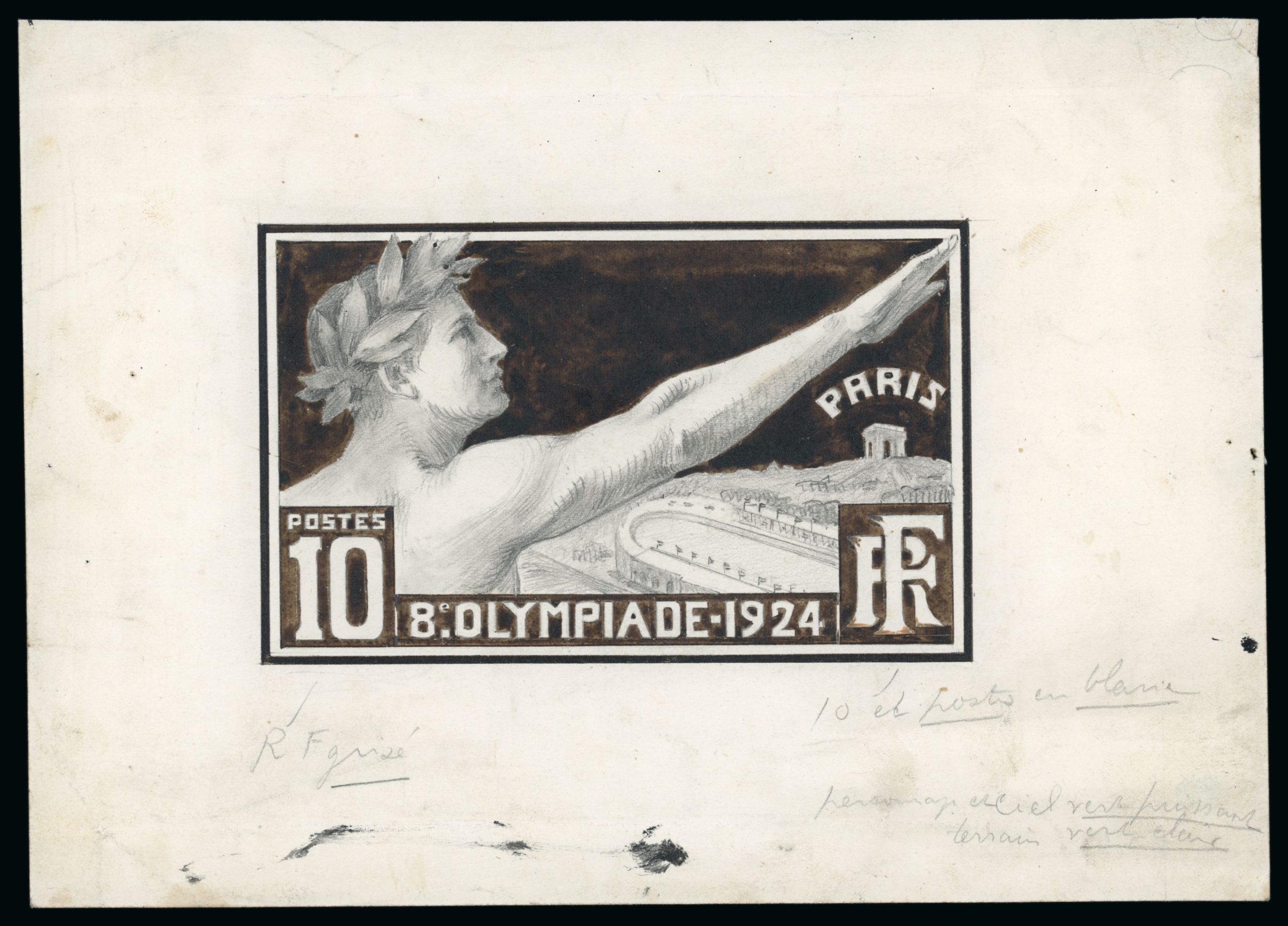 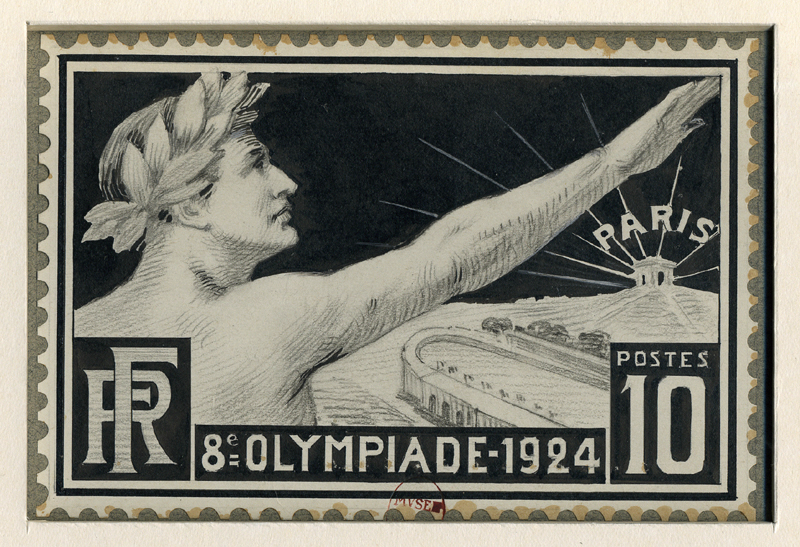 Fig.6 shows as essay that is in the Musée de la Poste in Paris. It shows the value and “RF” have now switched sides and “RF has been “greyed” (as annotated in the essay fig.5). It also shows rays of light shining from the Arc de Triomphe on the hill which was also seen in the earlier essay in fig.4 and in the issued design. 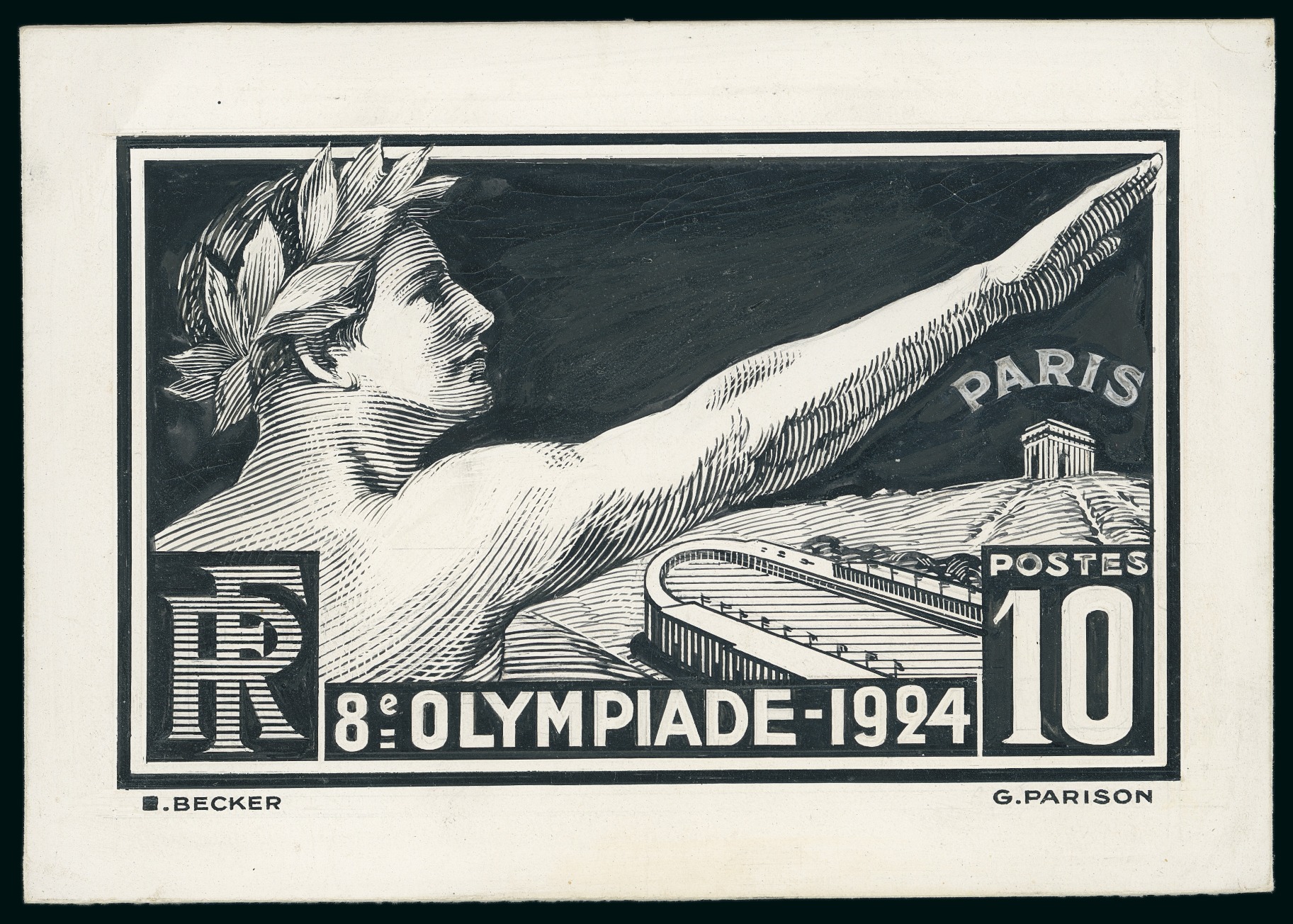 Fig.7 appears to be the latest state of essay known. This is a much more detailed handpainted and etched essay that shows the design of the stamp as it is intended to be engraved. The font of “8e OLYMPIADE-1924” and “PARIS” is now very close to the issued design and it also included the artist’s name (Becker) and engraver’s name (G. Parison) as they were to be shown on the stamp. Curiously the rays emanating from the Arc de Triomphe haven’t been included and “FRANCE” is still not featured at the top. However in the earliest state of the die proof we have seen (fig.8), the rays are back and extend only until the raised arm. 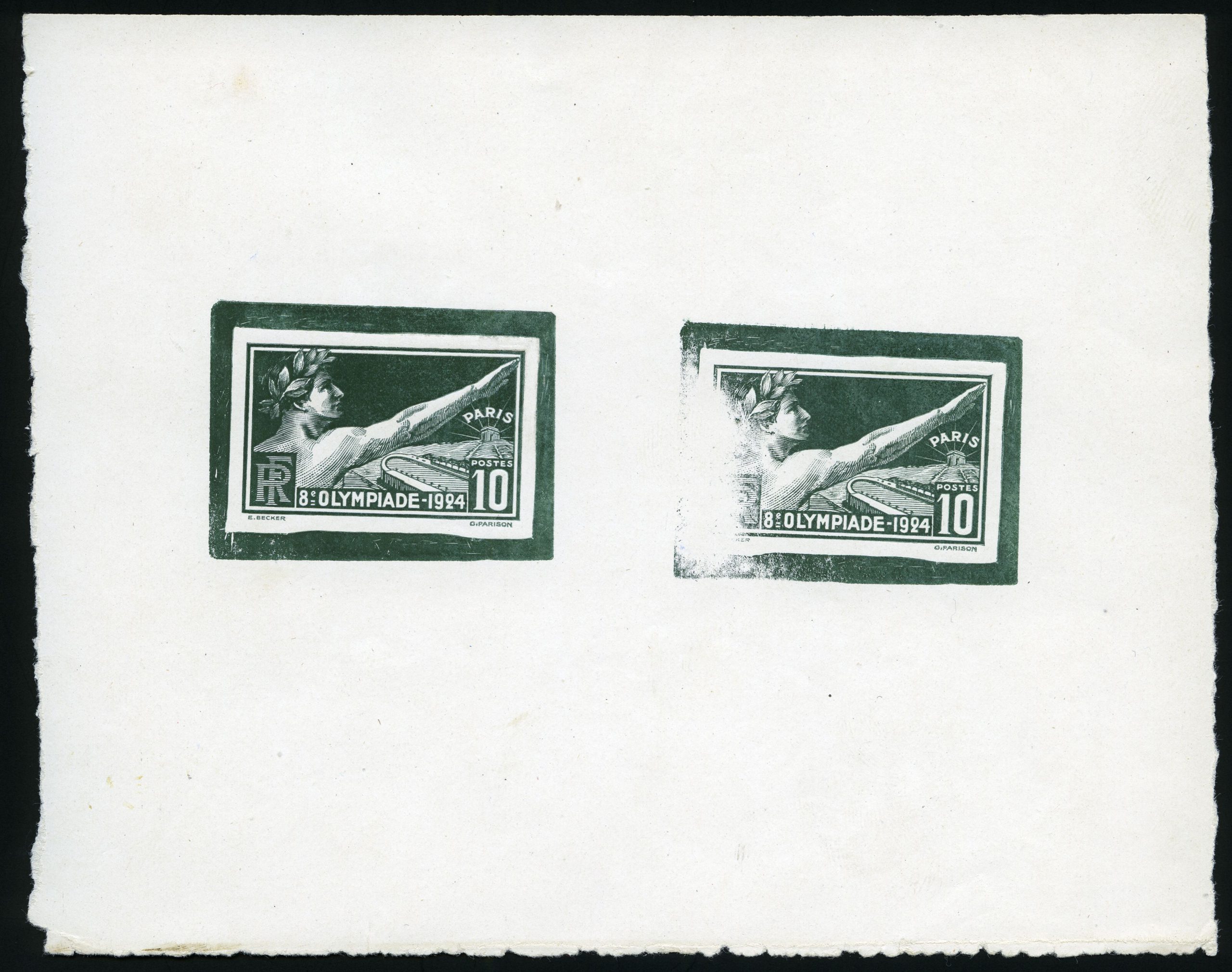 Fig.8. Image above showing detail of the rays

In a later die proof seen in fig.9, extra lines have been engraved in between the previous rays. 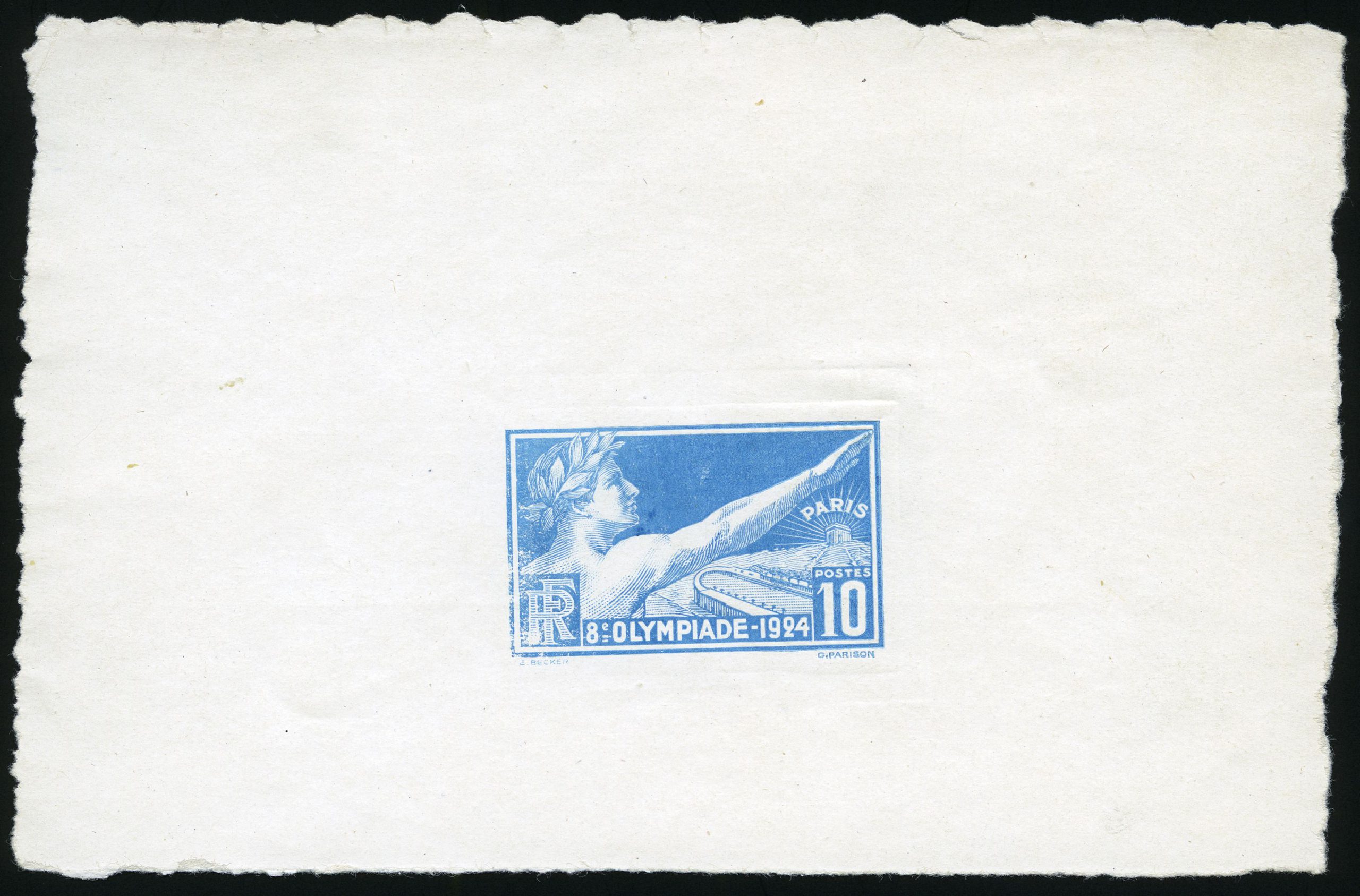 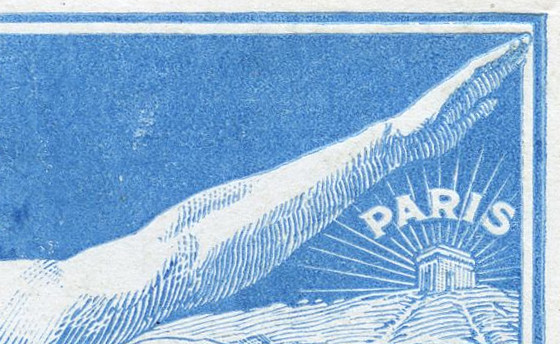 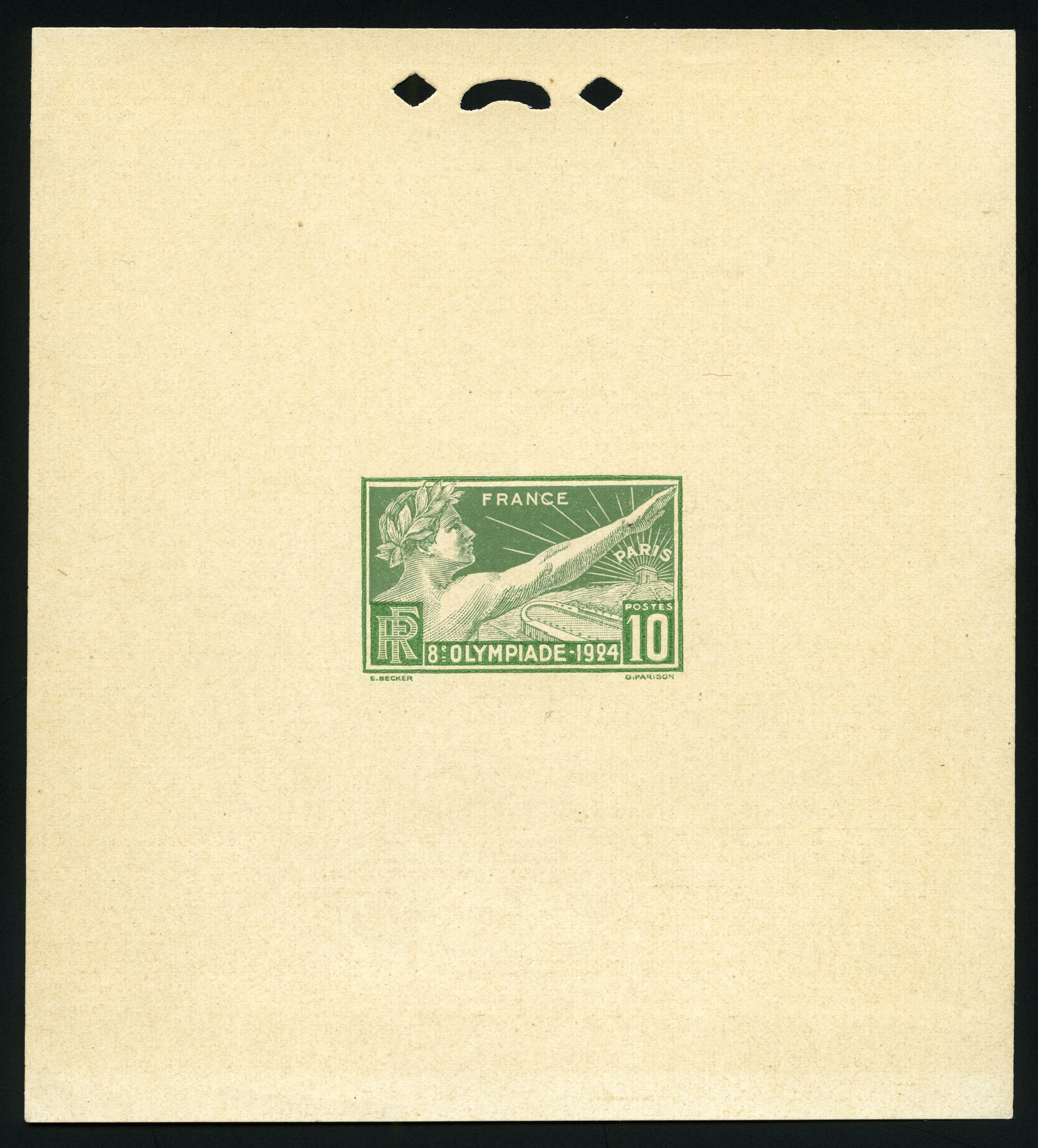 Then finally, in the accepted final design as illustrated in the “Atelier de Timbres Poste” proof in fig.10, the rays were strengthened and extended above the arm and “FRANCE” was finally included. 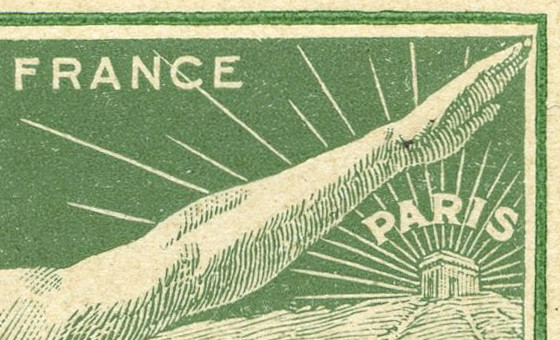 The 25c value: Although we haven’t seen any essays of the 25c value in private hands (there is an enlarged ink and pencil essay in the Musée de la Poste), there are stamp-size photographic essays of Becker’s preliminary work (figs 3 & 11) as mentioned before. It has several similar elements to the issued design except funnily enough, there is the Arc de Triomphe again emanating rays of light! In the following proof stages, engraved by G. Daussy, the background was changed to feature Notre-Dame cathedral and the Pont Neuf. 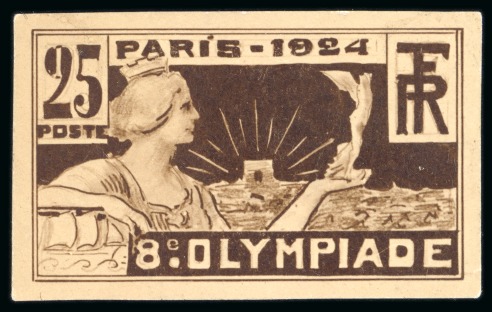 Like the 10c value, the 25c also went through some design changes in the engraving stages. In figure 12, the two proofs show a background with diagonal lines of clouds and again no “FRANCE” underneath the value. It appears to be a single die and not a composite of the outer frame and central vignette as later proofs show. The one in black is on thick glossy paper and shows the coloured surround and the blue example is on thin wove paper with the albino impression of the surround. Both are in monochrome and feature in our upcoming June 13th-17th auction series. 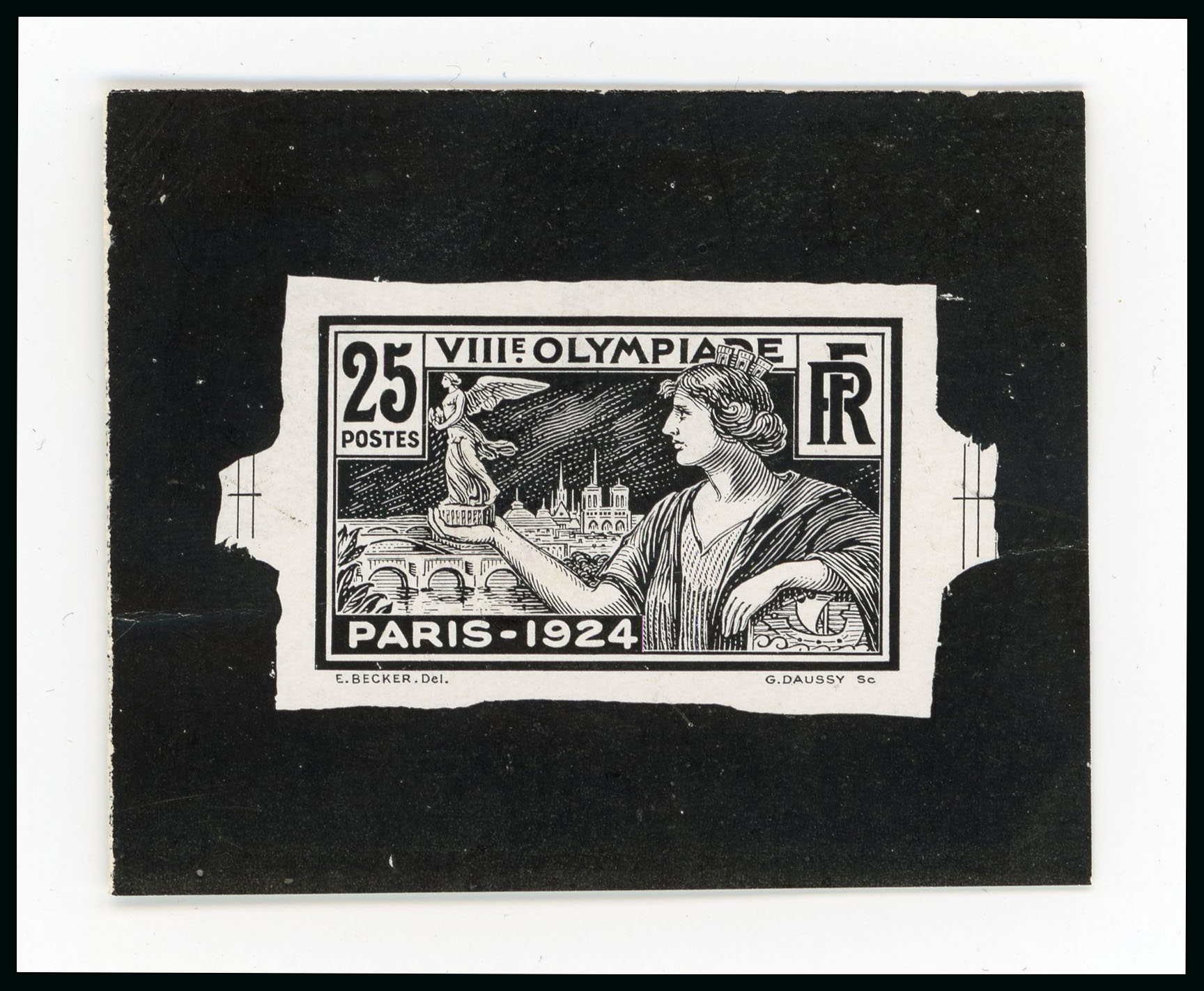 Fig.12: Two die proofs showing the diagonal lines of clouds, both of which are in our upcoming June 13th-17th auction series.

Then there seems to have been a decision to print the 25c in two colours. The example in fig.13 shows the frame in grey and the central vignette in green. “FRANCE” is still omitted and the clouds have been mostly erased. Interestingly so has the bush from the lower left corner, the statue has been defaced and there is extra cross-hatching on the stomach and shoulder. This proof is also dedicated and signed by the engraver Daussy: “To my dear Cortot, courtesy of the author, Daussy” (translation). 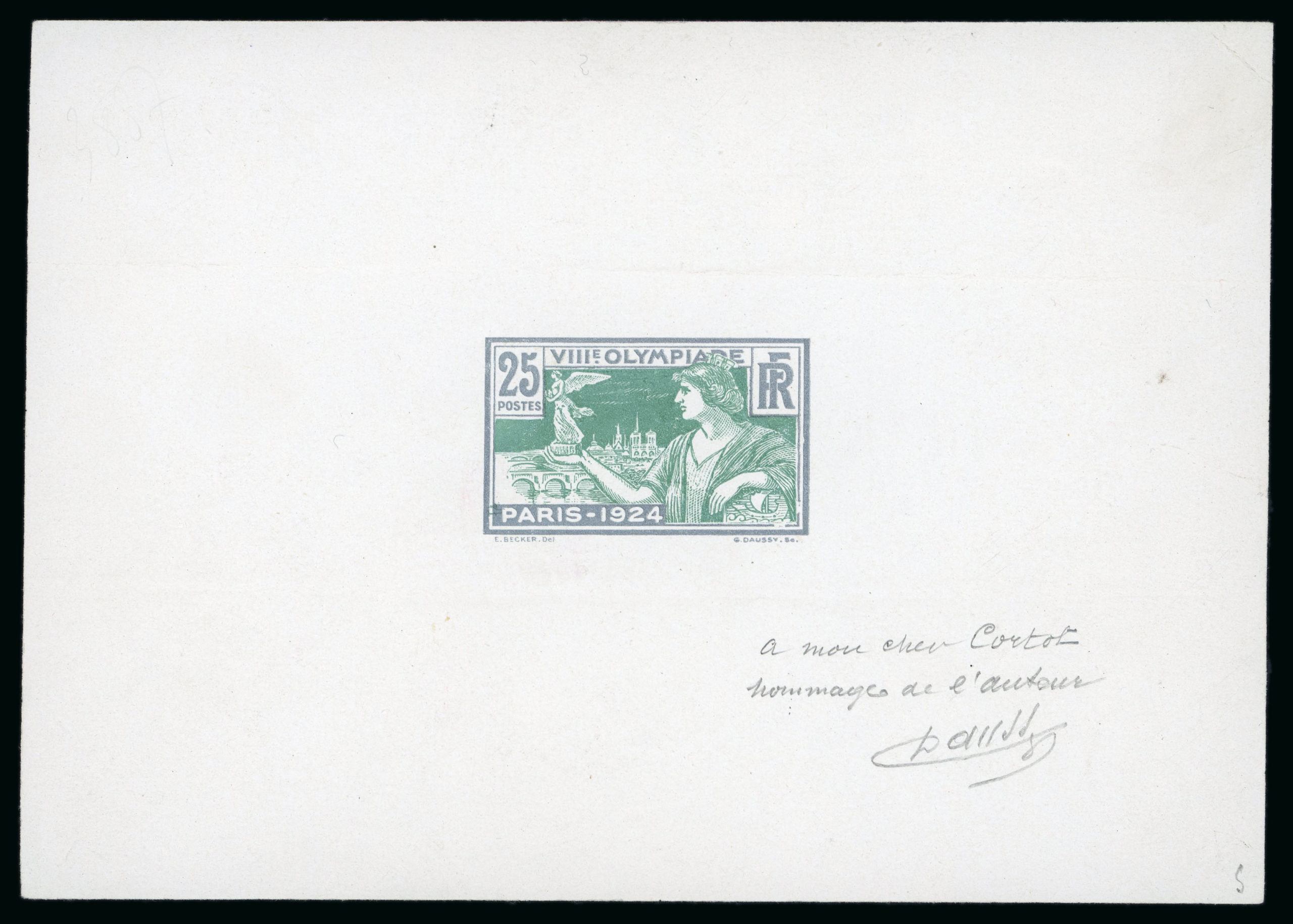 Seemingly two new dies for the centre were created; one with horizontal dashes for the clouds (fig.16) and one with a blank sky (fig.17). Figure 14 shows a close up of Victory from the first rejected die (in black), the defaced die (in green), the second rejected die (in scarlet) and the accepted die with blank background (in rose-red). Individual and collective die proofs of the accepted centres and frames were also made (fig.15). 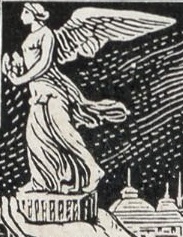 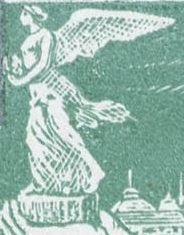 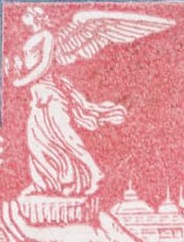 Fig.14: Enlarged details of Victory in the rejected and accepted dies 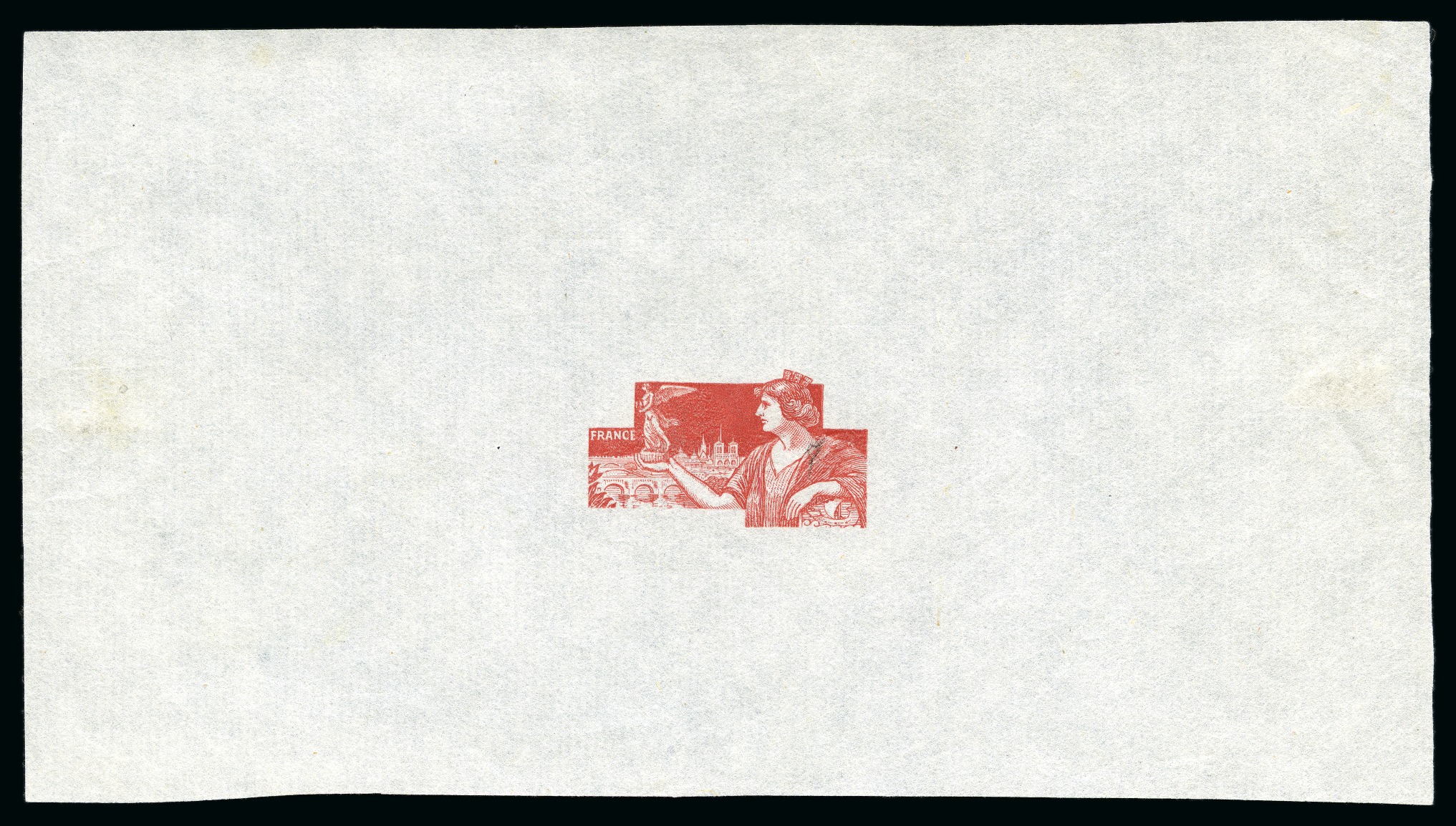 Fig.15: Die proof of the central vignette in scarlet 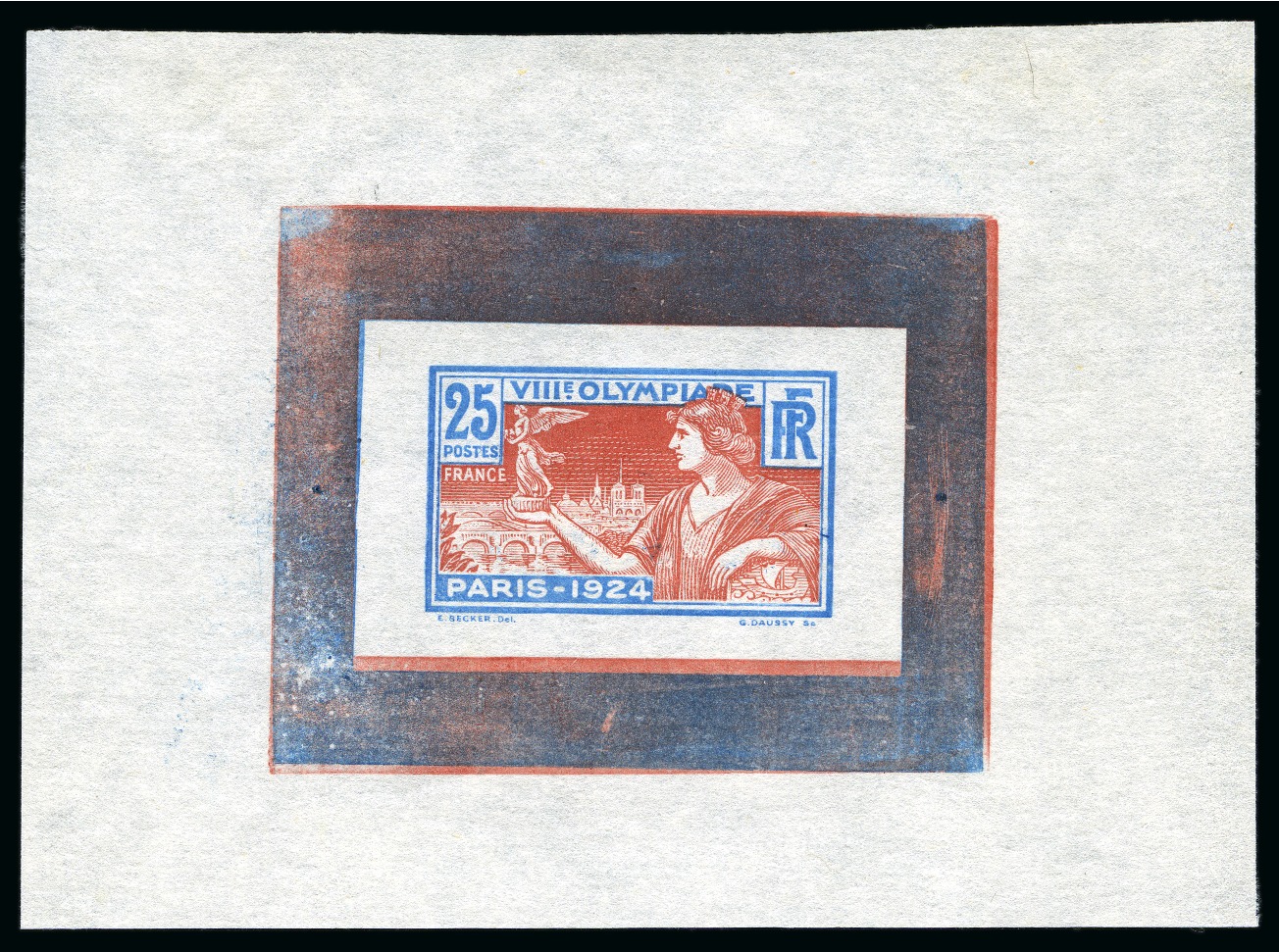 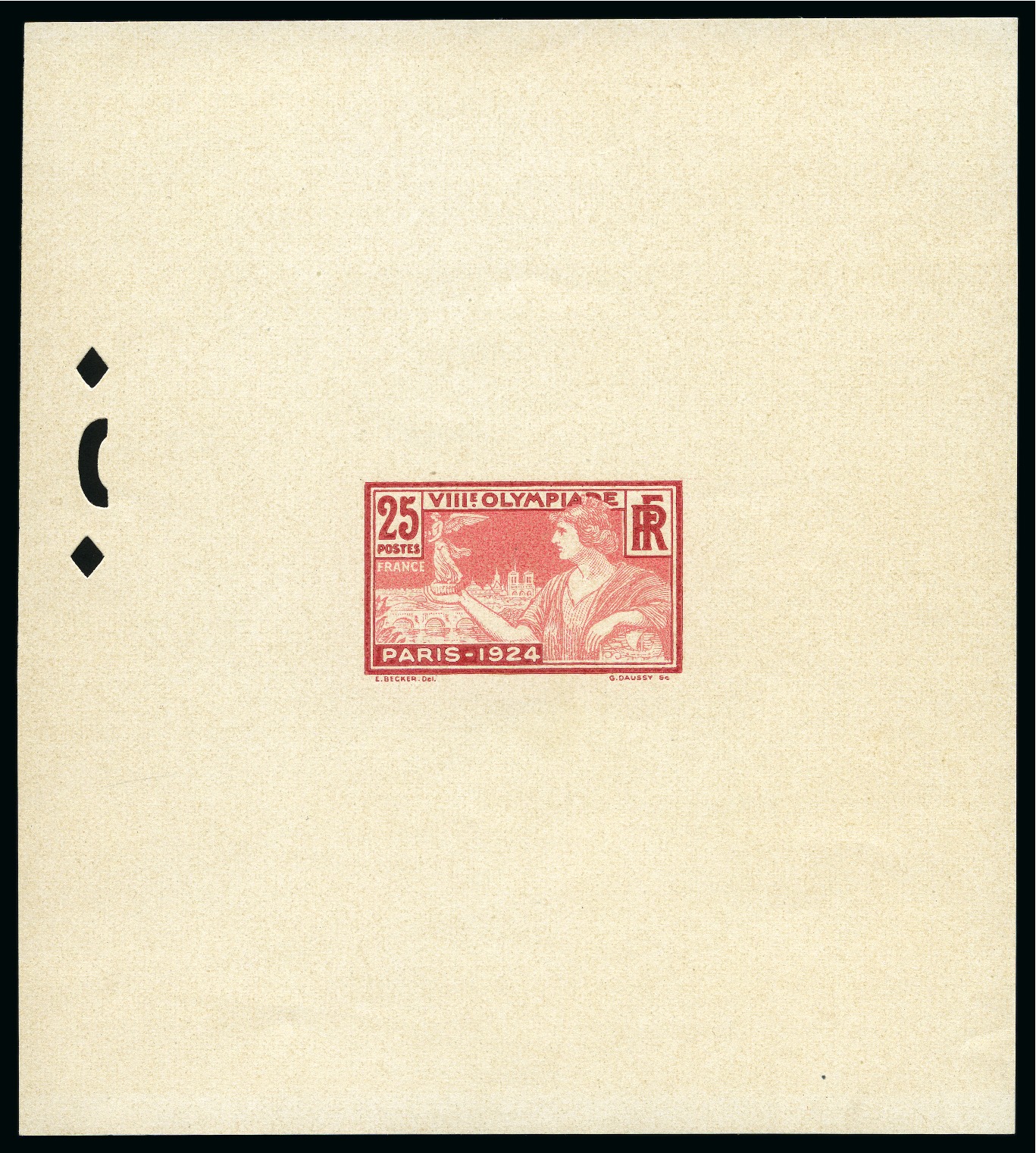 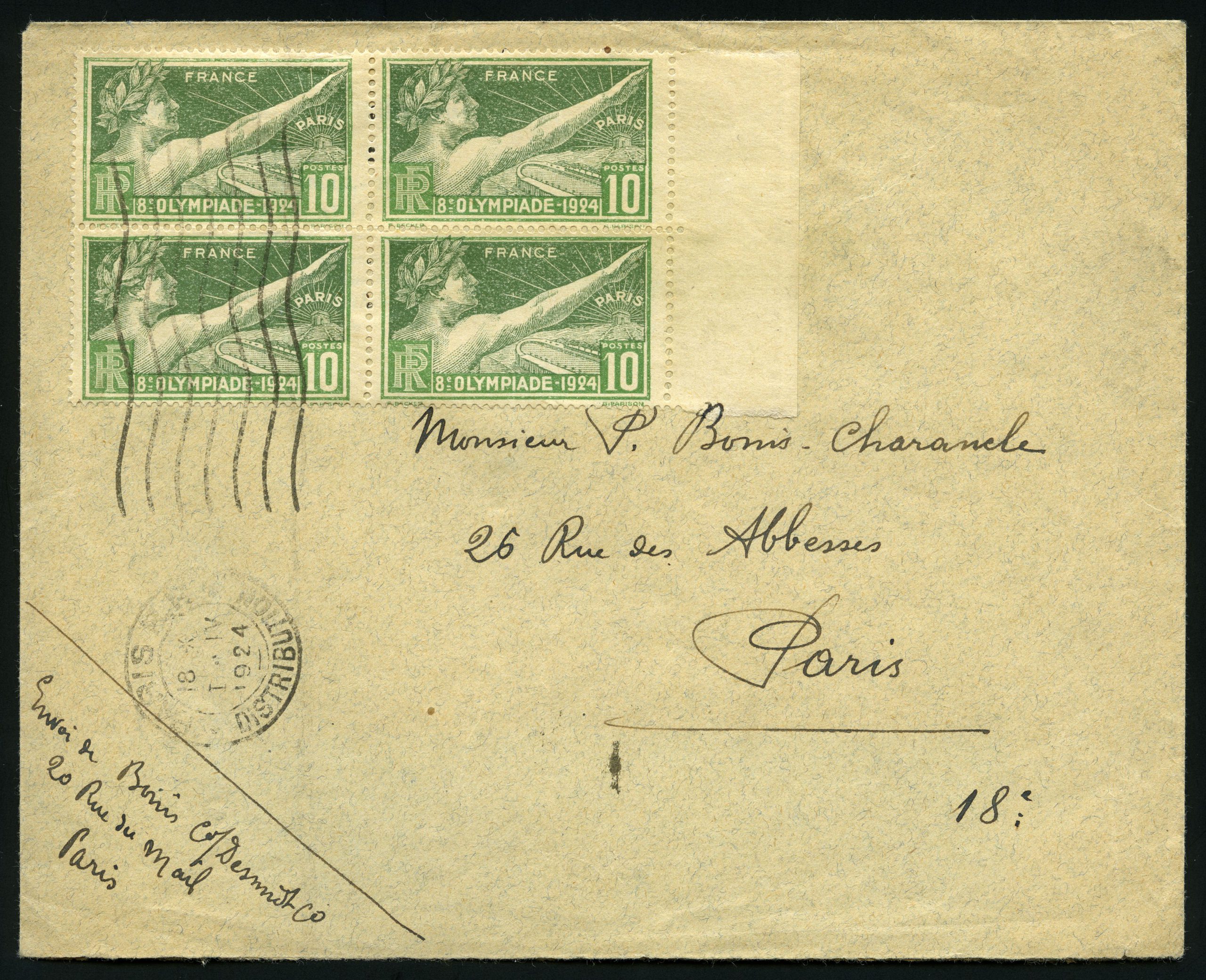 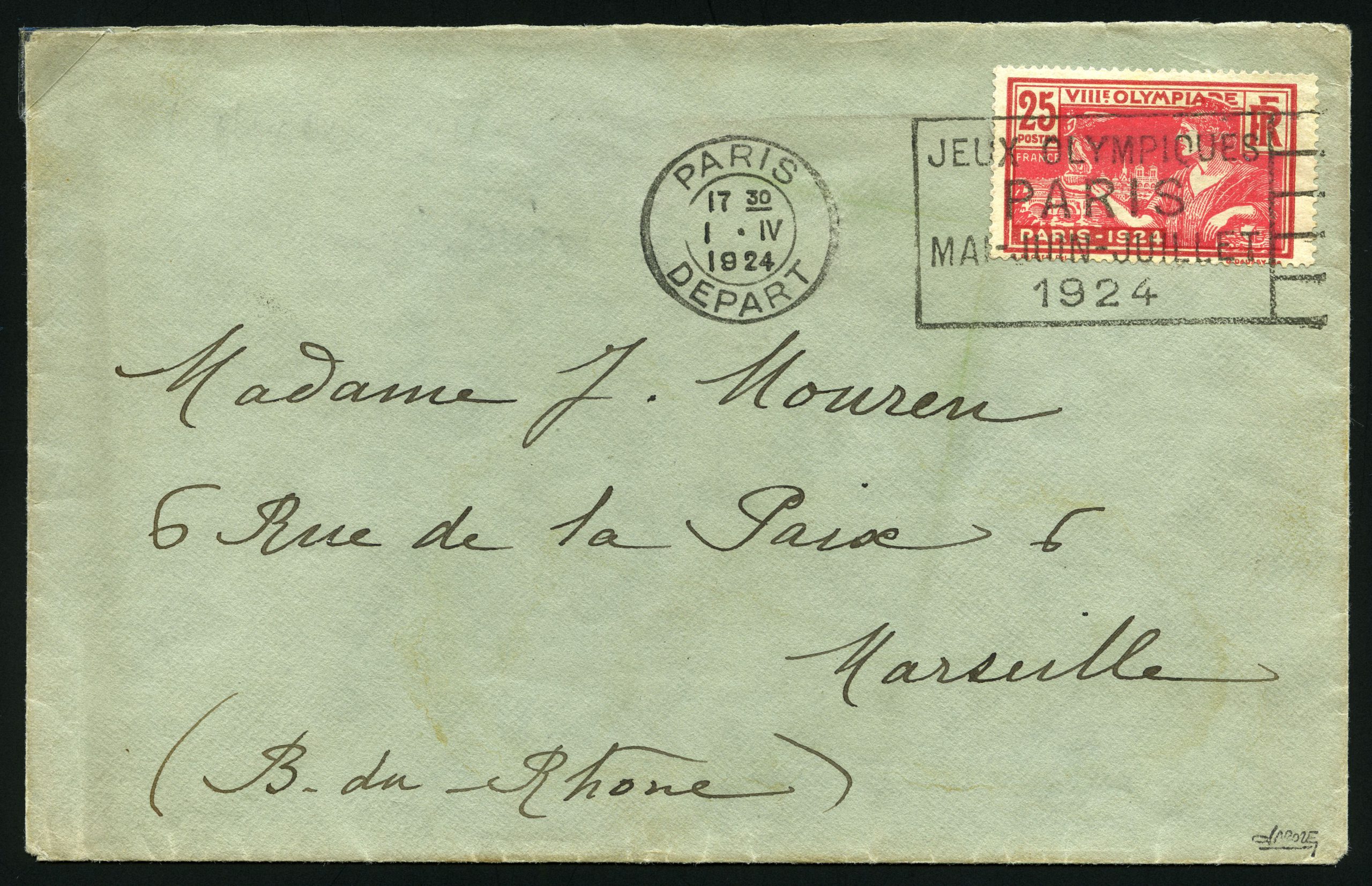 For those interested in this fascinating issue, part 2 of this collectors’ guide to the stamps of the 1924 Paris Olympics will feature in a future digest, where it will continue with the design of the 30c and 50c stamps including the unissued design depicting the Roman stadium in Nimes.

And be sure to check out our June 13th-17th auction series for the Olympic stamps and memorabilia which currently features over 350 lots.

If you want to receive more information about our upcoming auction series, create your personal account or contact us.