Crossing the Atlantic has been a fascination for many centuries. Industry and communications have relied upon an ability to navigate the challenges that lay between Europe and America and the America’s and the rest of the world. Technological advancements have from time to time revolutionised this competitive and often glamorous activity, and the intensity of travel was never so apparent than during the 1850 to 1878 era when the arrival of steam navigation improved journey times. In our upcoming auction of ‘The Antonello Fumu Collection of Transatlantic Mail Routes to and from Americas’, the postal history illustrates the importance of the shipping routes to both sides of the Atlantic. We take a closer look at some of the key items that make up the 159 lots and highlight how the mail system reflects the social and commercial changes of this important period in the development of transatlantic crossings.

In 1976 a supersonic plane made the transatlantic crossing between London and Washinton in 3 hours 30 mins. One hundred years before that historic date there were no aircrafts and the fastest mode of transport was steamships between these two nations, and you won’t be surprised to learn they couldn’t travel at twice the speed of sound – which is a frightening speed of 1,354 mph. However, during the 1850’s a paddle steamer, with a tailwind and a bit of good fortune, could make the transatlantic crossing between Liverpool and New York in a few days shy of three weeks. This was dramatically improved in 1863 when steamships were introduced to this famous route and it became possible to navigate the journey in just 8 days. Shaving 10 days off a crossing was a major step forward and whilst it’s not supersonic it did mean that mail could be received and replied to in the same time it took previously to receive mail one end of the crossing.

And mail from America to the historical region in Europe known as ‘Silesia’ – which is now modern day Poland and parts in the Czech Republic and Germany – is rare. An example of this is Lot 10017 which is an 1850 envelope, which includes its original content, sent from Baltimore to Freiwaldau (then Austrian Empire) is franked with a US 1847 5d red brown showing a variety in the top and bottom frame, and is one of just nine covers recorded to this area, and unique with the addition of the variety, and comes with an expert certificate from The Philatelic Foundation (1995) and an estimate of $1’500 to $3’000. One to add to your bid list. 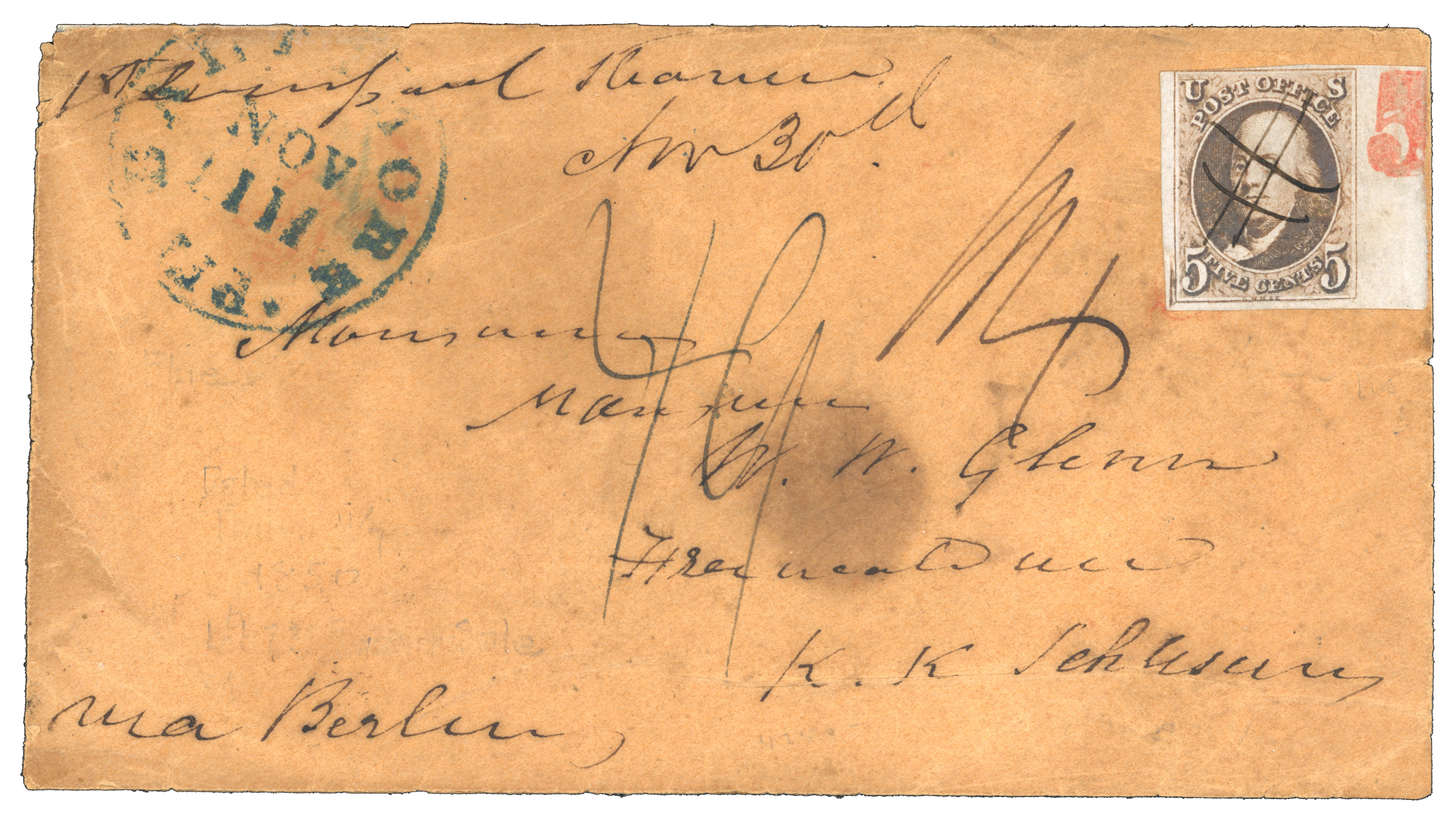 A bit later in that century, but pre Universal Postal Union (UPU), registered mail between Russia and America was very rare, and Lot 10065 is a Registered cover from Yevpatoria, Ukraine, to Philadelphia, bearing 1866 Russia 5k and two examples of 30k, a characterful and outstanding rarity and probably the only known pre-UPU registered mail originating from the Ukraine. It was part of the renowned Paolo Bianchi collection of classic Russia and has a certificate from the legendary philatelist Zbigniew Mikulski, with an estimate of £2’000 to $3’000. An item which fits into a number of specialised collections and not often available to buy.

Mail into South America from Europe are also rare and Lot 10099 is an 1871 cover from Hamburg to Buenos Aires, Argentina, franked with German Confederation 1869 1/4gr, 1/2rg, 1gr and pair of 5gr, and taken via a British transit sea carriage, carried via Ostende to London and then up to Liverpool and put onboard PSNC “Lusitania” towards Valparaiso and transferred at Montevideo to Buenos Aires. Quite a journey and a rare destination and crossing, estimated at $2’500 to $4’000, and comes with a Mehlmann (2013) expert certificate. Again a cover which has a board appeal and adds weight to any exhibition. 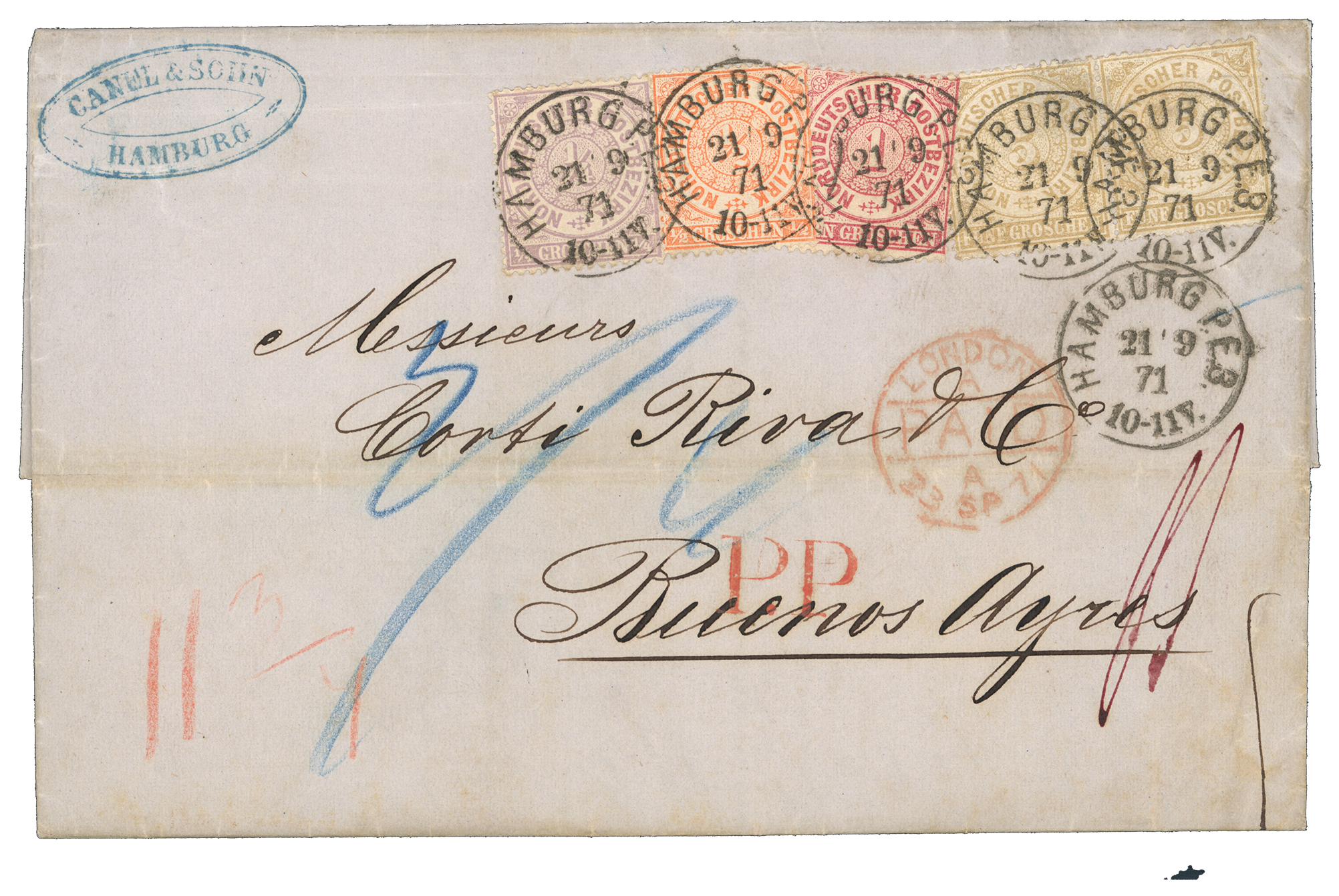 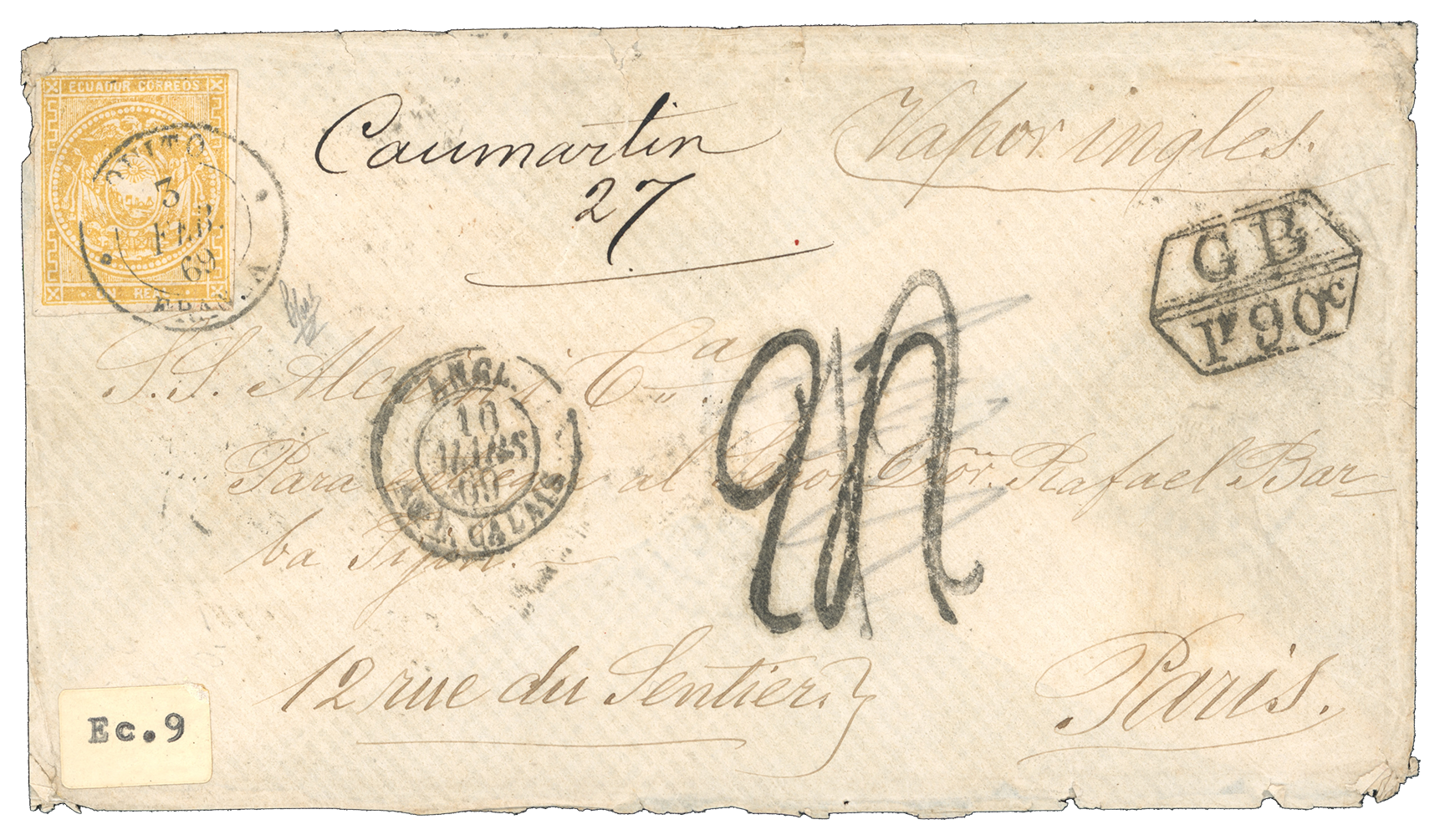 Now mail from Ecuador to Europe is not common and in this auction Lot 10132 has a rare usage of an Ecuador first issue 1865-72 1r orange yellow, intermediate impression, sent in 1869 from Quito to Paris, France, routed via the British Post Office to Guayaquil for carriage by PSNC steamer to Panama City, thence to Colon and put onboard RMSPC “Tasmanian” to Plymouth, via London, to Calais and onto Paris. A very rare first issue usage on destination mail, which there are thought to be around ten such items recorded, and has expert certificates from Peter Holcombe (1992) and Brian Moorhouse (1992), and is estimated at $1’500 to $2’500. This is an appealing cover which illustrates the intricacy of the mail routes and highlights the importance of the interwoven communication routes on both sides of the atlantic.

A cover which made a similarly arduous journey from Peru to Italy, via a northbound steamer from Callao, is Lot 10135. It then went onboard a steamship to St Thomas before being transferred to another steamer from Panama to Southampton (on the south coast of Britain), so it could be transported to France and on down to Genoa overland and is a unique, earliest recorded date of the Peru 1 peseta red, sent in 1858 tied to an envelope from Lima. It is a major exhibition item of the first issue of Peru, and has expert certificates from Emilio Diena (1981) and Brian Moorhouse (2010), the latter who gives a detailed explanation of the potential confusion of the rate at this early period on what is a complex route. The estimate is $3’000 to $5’000 and an exciting opportunity to acquire such a rarity from this fascinating period in mail to and from the Americas. 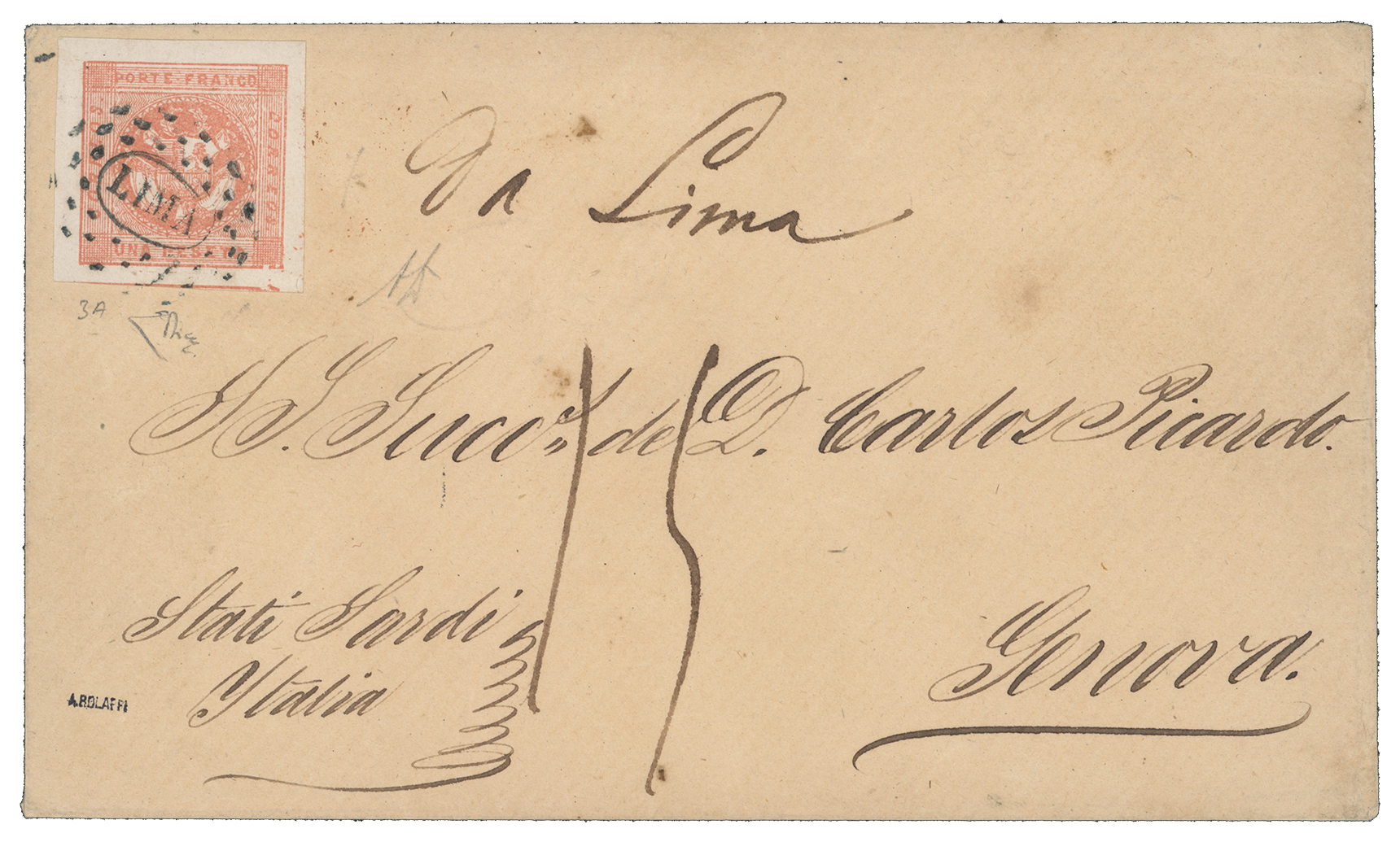 These are just a few examples of the exhibit in which the Italian postal historian and philatelist Antonello Fumu won two Gold medals and a Large Gold for this collection which is called, ‘1850-78 – Atlantic Mail Routes from and to Americas’. His achievements were at Thailand 2018, China 2019 and Stockholmia 2019 respectively. This collection is available to see intact on the Museum of Philately and the auction catalogue with full details of all the lots will be available next month, with lots also available to view and bid upon online shortly.