Mongolia and Genghis Khan are intrinsically intertwined. Genghis Khan invokes the memory of the world’s largest ever Empire, along with the obvious Mongol invasions and conquerings, which sadly conjures up visions of large-scale massacres of civilian populations throughout Asia and Europe. It’s a fact that Genghis Khan’s brutality left millions of people dead in his 21 year reign during 1206 and 1227. Even in death his brutality reached out from his grave, because everyone who attended his funeral, or indeed happened to be passing by at the time, were slaughtered to ensure the location of his grave site was kept a secret. You have to admit that arranging the murder of your funeral guests takes brutality to the next level.

But, that was all a long time ago and let’s be candid, brutality and mass-murder are not confined to the 13th century or indeed the Mongolian Empire, because our featured cover, which originates from a Russian Post Office in Mongolia in 1914, and sold for EUR 32’000 in our recent MSF Charity Rarities of the World auction, is one of only three recorded Registered covers with a Romanov franking, coming out of the Russian Post Office in the Mongolia town of Ulyasutai. The Romanov 7k Brown stamps used on this envelope have the distinctive portrait of the Russian Tsar Nicholas II who was the last Emperor of Russia, his reign spanning November 1894 until his abdication in March 1917. But the story doesn’t end peacefully with him stepping down during the Russian revolution, because Nicholas II, his wife and five children, and four members of his domestic staff were imprisoned by the revolutionary government, exiled to Siberia, and then moved to Yekaterinburg where they were rather brutally executed and mutilated in July 1918.

Coincidentally, the Romanov family gravesite remained unknown until discovered in an old mineshaft by an amateur archaeologist in 1981, and not acknowledged until 1989 after DNA tests confirmed the gruesome remains were those of Nicholas II, his wife and three of his children. It wasn’t until 1998 that they were exhumed and re-interred and given a state ceremony in St. Petersburg, exactly 80 years after their execution. Although two of the children, a boy and a girl, were found in a separate smaller grave near to the main make-shift burial place some time later in 2007, and the two children sadly still remain in a state repository pending further DNA tests.

Whilst the Romanov family still await their ultimate resting place all together, it is assumed Genghis Khan remains at peace buried somewhere near his place of birth in Khentii Aimag, Mongolia, which is ironically a region that borders Russia. Although a Mausoleum was constructed many years after his death in this area as a memorial, it is not his burial site, which remains unknown to this day. A fact that would no doubt please the old Emperor of Mongolia. 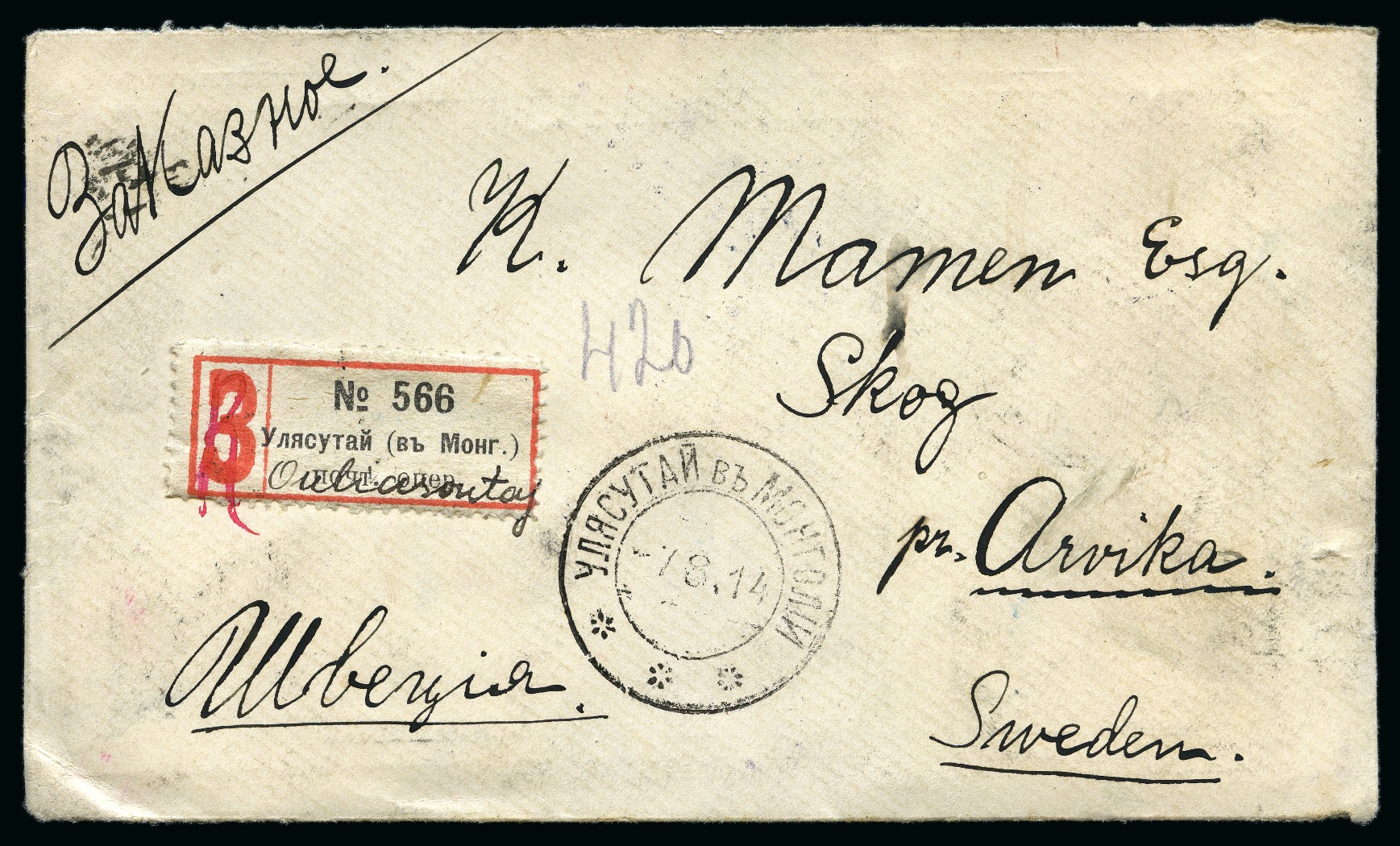 Front side of lot 70110, showing the Cyrillic registration label with additional Latin “Ouliusoutay” written in manuscript (necessary for mail abroad)

Of course the Empire’s of Genghis Khan and Nicholas II, which are here connected through a rare piece of Mongolian postal history, have much more to them than these barbaric snippets, and both countries, Mongolia and Russia are rich in historical content and mythical intrigue. Mongolia being one of the least populated countries by size in the world, landlocked and sandwiched between the powerhouses of China to the south, and Russia to the North, it is no wonder that postal gems like this envelope emerge so rarely onto the philatelic auction stage, and thus inevitably attract a bullish degree of interest, often resulting in hard-hitting auction results.

Whilst they could never be described as brutal, it would certainly be useful to know where anymore of these covers are buried. If for no other reason than to do them justice, a luxury neither the victims of the Genghis Khan Empire, or the Romanov family can expect to ever gain. The world, as illustrated by history, is sometimes very brutal.

You can view the results from our recent MSF Charity Auction online. The catalogue is also available to download.

View the Results of our 23rd Rarities of the World Auction