As if to reflect the landlocked region that boasts the world’s highest mountain, our ‘Overseas & Latin America’ auction catalogue has nestled amongst Asian a special section on ‘Tibet – Everest Expeditions’. And if you scroll through this attractively produced catalogue, you’ll be blessed with some nifty graphics of the iconic image of the 1924 Everest Expedition stamp, namely the blue and white labels which feature a view of Mount Everest. This classic image of Everest on the labels is framed by the three significant locations that represented the places the 1924 expedition had to take in on this the third attempt to ascend the ‘29,029ft’ when coming from the almost impossible north face, namely; Sikkim, Tibet and Nepal, with the year ‘1924’ underpinning the landscape motif. The above featured example, lot number 41166, has a rare block of six of this adhesive tied to the reverse of an envelope by the “MT. EVEREST EXPEDITION / TIBET / 1924” cachet. Very fine and rare example.

Of course, the 1924 Everest Expedition is overshadowed by the loss of the two British mountaineers George Mallory and Andrew Irvine who disappeared somewhere high on the mountain’s northeast ridge. To this day it is not known if they made it to the summit and only Mallory’s body was ever recovered and that wasn’t until 1999. It’s a legendary tale that was made into a film ‘The Epic of Everest’ which was the work of another participant on the 1924 Expedition, John Noel, and his original work was later restored and enhanced and has this year been selected by the BFI London Film Festival for inclusion in “We Are One: A Global Film Festival” – organized during the COVID-19 pandemic. Worth a watch. 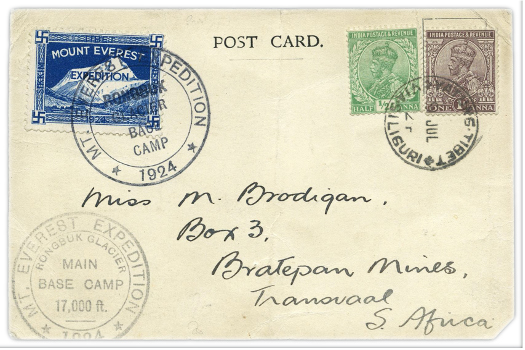 And, another fascinating fact about this expedition and crucially the design of the official labels is the use of the ‘Swastika’ in the four corners of the stamps – above postcard lot 41167. If you ask most people today what this symbol means you might get a few who think it’s something to do with Nazi Germany, being the 20th-century German Nazi Party symbol. But in fact this symbol in Hinduism means ‘sun’, ‘prosperity’ and ‘good luck’ – the region around Tibet and Nepal being predominantly Hindu. The use of this symbol is certainly eye-catching given it’s later use and historical legacy and one might also question how much luck it actually gave the fated expedition team. However there is plenty of postal history to celebrate this epic British adventure in the Himalayas, and it doesn’t end in 1924. 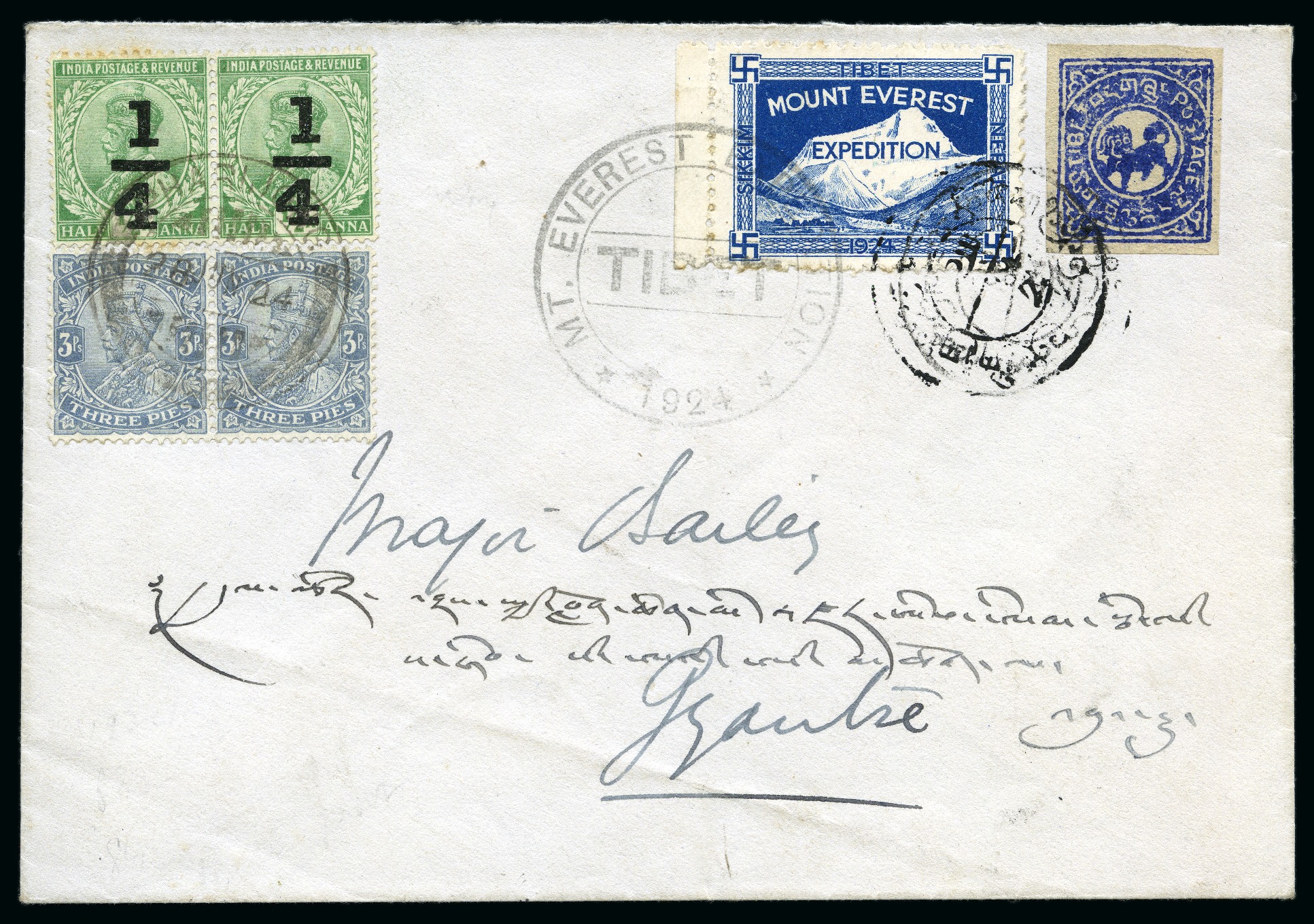 Because the 1936 British Everest Expedition didn’t have much luck either, and seems to have gone down in history as a complete failure. Mainly on account of poor planning, and it would seem some unfortunate heavy snow and a monsoon, which forced the climbers to retreat on several occasions. There was also an avalanche which almost killed two of the climbers. Needless to say they didn’t make it to the summit. And even from a postal perspective they didn’t exactly get their rub of the snow. 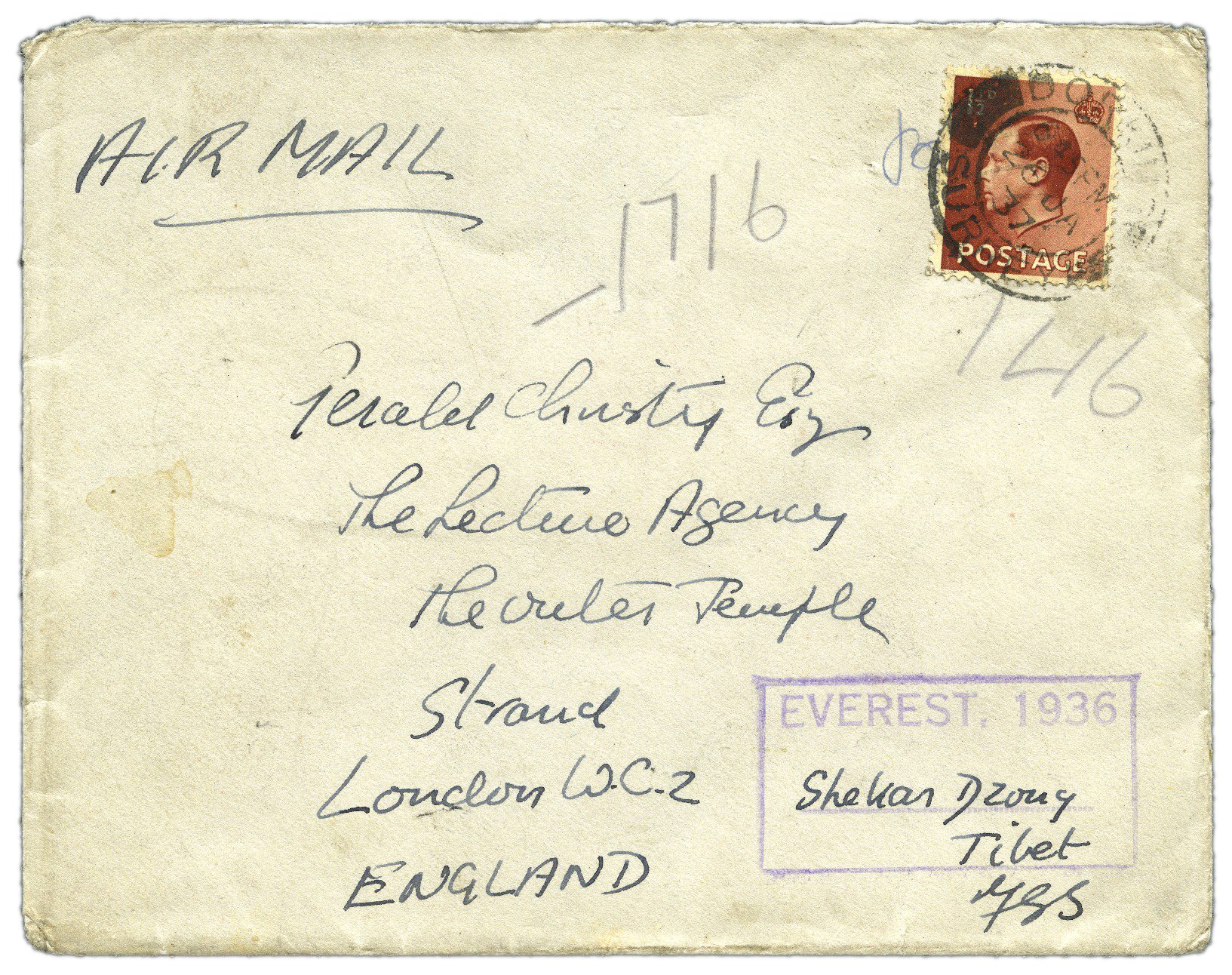 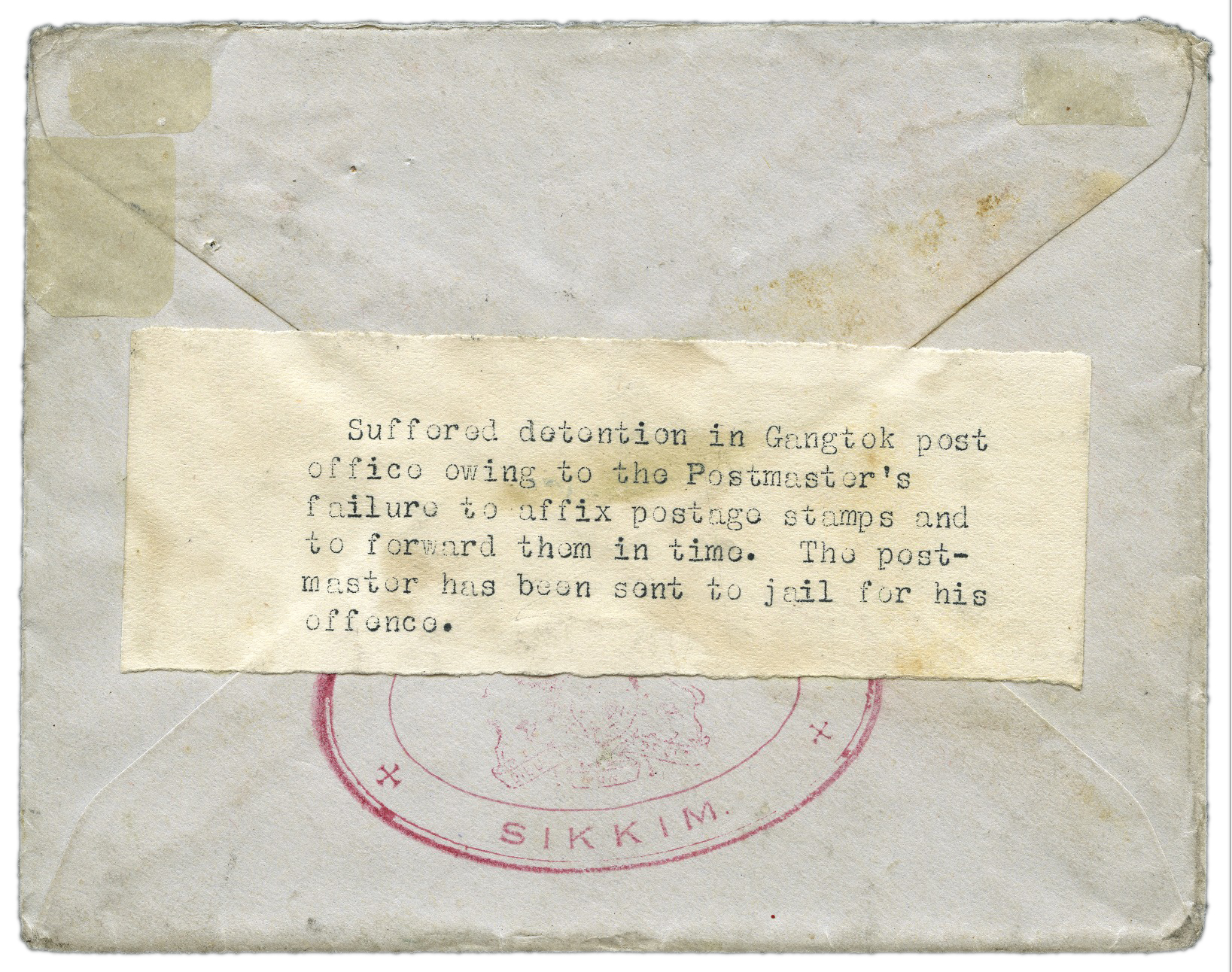 The item illustrated above, lot 41182, is an envelope from the 1936 Everest Expedition, sent by one of the climbers Frank Smythe to England with “EVEREST, 1936” violet despatch cachet annotated “Shekar Dzong / Tibet” and initialled by him, but if you turn the cover over it has a Sikkim Legation official cachet and label reading: “Suffered detention in Gangtok post office owing to the Postmaster’s failure to affix postage stamps and to forward them in time. The postmaster has been sent to jail for his offence”, this cover was forwarded by Sikkim officials and reposted in the UK with a King Edward VIII 1 1/2d. It’s an intriguing turn of events for the expedition team who gave money to the Postmaster in advance to send batches of mail back home. However, he kept the money and did not send most of the mail onwards. According to the history books though, the postmaster was later freed on appeal. Lot numbers 41180 to 41184 provide a thread on this interruption to the postal mail sent by the 1936 British Everest Expedition team.

The auction also features other Everest attempts such as the 1953 expedition, which was the first to have succeeded when Edmund Hillary and Tenzing Norgay reached the summit on Friday, 29 May 1953. And indeed Edmund Hillary’s signature features on a commemorative postcard from the 1975 British Everest Expedition, in which 17 members of the team have put their signatures alongside Edmund Hillary which is a very scarce item indeed. Lot 41186 also features Tenzing Norgay from the 1953 attempt, and this lot does include his signature. However, if Mount Everest isn’t your preferred summit, then don’t despair because our auction lots feature several mountain ranges which have been the focus of expeditions, such as 1954 Daily Mail Himalayan “Abominable Snowman” Expedition (lot 41187), 1954 California Himalayan Expedition (lot 41188), 1955 Kangchenjunga Expedition First Ascent (lots 41189–90–91), 1965 Jagdula Expedition (lot 41192), 1970 British Annapurna South Face Expedition (lot 41193), 1971 International Himalayan Expedition (lot 41194), and several collections of other intrepid mountaineering adventures such as lot number 41198 the ‘1953-82 Nanga Parbat Expeditions’ available in an album.

With a wide range of covers, that feature commemorative adhesives and labels, special cachets and postmarks, to picture postcards, some signed by climbers or expedition members, as well as commemorative material, instructional marks and labels, single items, assemblies of material and collections, and with prices from the hundreds to several thousand there’s something for all even if your budget isn’t the tallest in the world.

The Tibet lots are available online, and the pdf catalogue can be downloaded here.