Top of the Olympic Table

The trouble with ‘perspective’ is that you tend to evaluate events, such as the 1906 Olympic Games (later uncredited by the IOC), through the eye of your own understanding. That approach, as I’ve discovered, is destined to produce false starts, sprinting in the wrong lane and even missing the finishing line.

Let me run through the events. Here I am lacing-up this article with some gold nuggets of Olympic memorabilia to assist in my representation of the featured cover, which is a 1906 Greece Olympic Set First Day Cover sent Registered from Athens to Italy, and rare because it is one of only two known examples, but then I stumble over some starting blocks and discover a whole flag bearing nation of other facts which cast a fresh light on this here contestant. 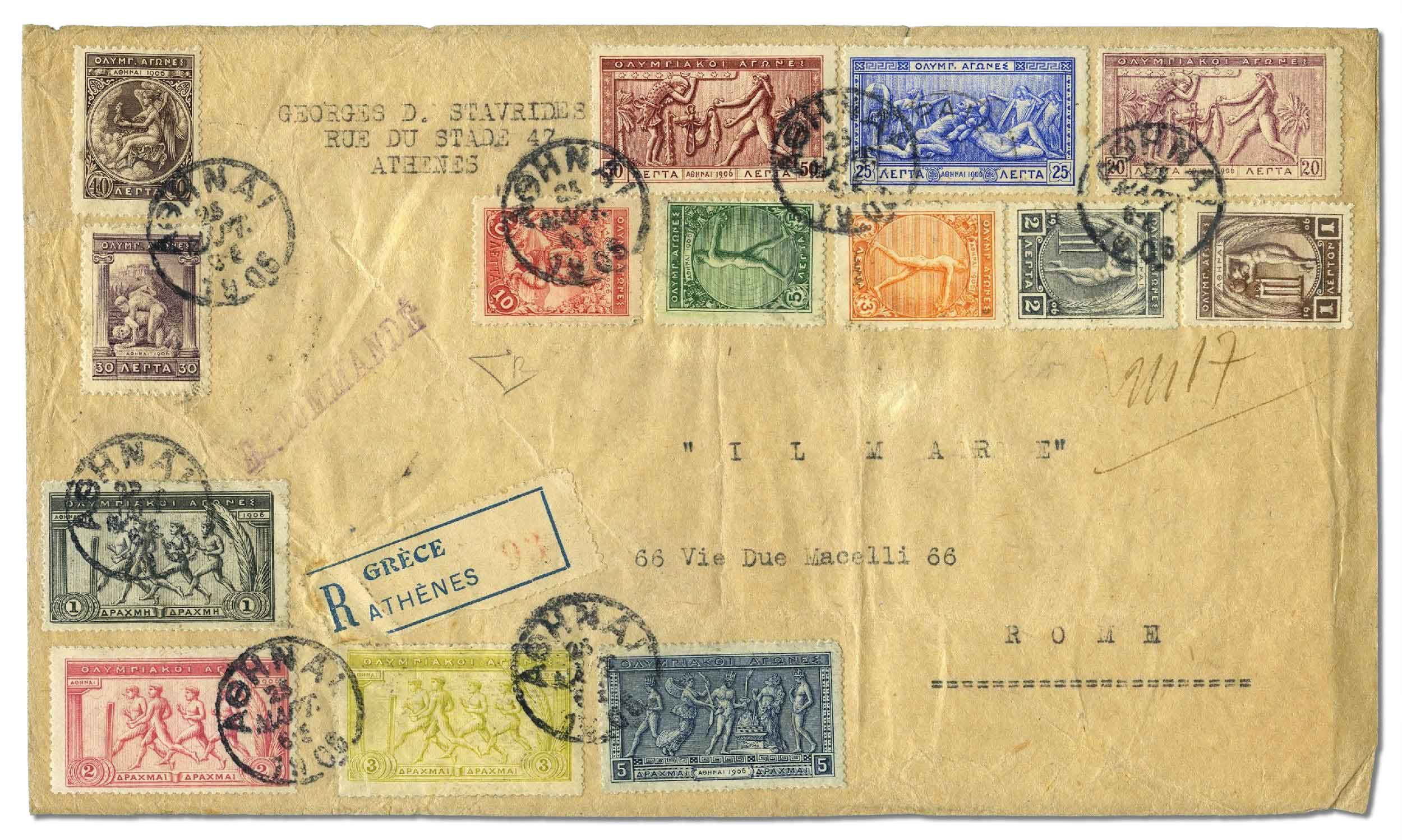 This 1906 (Mar 25) FIRST DAY COVER with Complete Olympic Set tied by Athens cds on envelope was sent registered to Italy, and is available in our upcoming auction; ‘Olympic Memorabilia & Philately’, which has over 1’100 lots, including material from a collection of Pierre de Coubertin, and 1896 Athens with many rare and showpiece items for the connoisseur, and 1912 Stockholm with a large selection of the rare STADION cancels, 1924 Paris with a range of the attractive and collectable proofs, specialised football related items (Olympic and World Cup), plus participation medals, torches, posters and other memorabilia, as well as many collections and accumulations.

First thing which jumps out at me is that in 1906 France topped the medal table with a whopping total of 40 medals, 15 of which were gold – that being the most golds and the most medals. Not bad. Well done France. The USA, whom we might expect to perhaps top the table based upon the size of the nation, were second with a total of 24 medals, 12 of which were gold –  that being the second most golds and joint third in the total medal tally. The host nation Greece finished third in the medal table, getting the second most medals with 34 but joint third in the number of golds with 8 – Great Britain also winning the same amount of golds and curiously the same total of medals as the USA, putting the GB team into fourth position in the final table.

Now here’s the false start. “Didn’t Greece do well”. It’s a statement which isn’t out of left field and I throw it out there and it seems to land within bounds. Greece isn’t a particularly large nation and although hosts in 1906 they seem to have punched above their weight coming in the top three nations out of 21 who participated in the Games. However, run round the track again and that statement goes in the wrong direction and falls short of the finish line by a country mile. Or in Greek terms, Pheidippides might tell you it went off course by a marathon proportion.

Why? Greece entered a staggering 312 athletes into the 1906 Olympic Games – also known as the Intercalated Games – whereas France entered 56 athletes, and the USA just 38. And, if you’re interested in this ‘new’ perspective, Great Britain 47 athletes, Italy 74  (5th in the table) and Switzerland a mere 9 athletes. The latter sharp shooting Swiss team came in 6th in the table with a total of 15 medals including 5 gold – albeit all seemingly coming from rifles and a revolver – remind me never to upset anyone when in David Feldman SA’s Switzerland office.

So this disproportionate amount of Greek athletes is a bit of a racket. You see, by default, with that many taking the field they were going to return the odd medal just by stepping out onto the grass – or clay as it was in the Mixed Doubles Tennis, for example. There were five entrants, one French couple, the other four couples were from Greece. Out of a possible three medals in that particular tennis event Greece were going to win at least two medals. And they did. Silver and Bronze. Not exactly acing it. But demonstrates the point, which doesn’t take Plato to workout who didn’t do so well in reality – Greece. My original assumption changed when my ‘perspective’ wasn’t reliant upon my own understanding but on the facts.

And without getting too philosophical about the Greeks, our marathon man ‘Pheidippides’, would definitely have taken an interest in the winner of the marathon race in 1906, who was a guy called Billy Sherring representing Canada. Canada only entered 3 athletes, which further hammers home the point that even Canada out paced Greece with a ‘one gold for three athletes’ ratio; if Greece had achieved the same they’d have finished with 104 golds. You see my point?

Now Sherring, who was in fact of English and Irish descent (photos of Billy show him wearing a running vest with a large Shamrock on the front) lived in Hamilton-Ontario, Canada and took race preparations so seriously that he lived in Greece for two months prior to the marathon so that he could acclimatise to the local conditions. Interestingly, the inventors of this iconic race and presumably the ones who had the greatest advantage being already seasoned to the climate, Greece, didn’t win a medal that year. Sweden got the silver and the USA the bronze. Maybe the Greeks didn’t enter enough runners?

However, it’s not all false starts and missing the finishing line for the Greeks. Because lucky for them there is only ‘one’ way to look at this 1906 Greece Olympic set First Day Cover. It’s ‘one’ of two known covers, and this particular ‘one’ has been entered for our upcoming auction of Olympic Memorabilia, so by default it’s a winner in that event. Granted, it’s alone on the podium, but that’s a good thing. You can’t knock the Greek’s philatelic credentials. Two possible entries, just the one runner, equates to gold. They are a smart bunch these Greeks you know.  Doesn’t matter what your ‘perspective’ is, this cover is top of the Olympic table.