The Postage Stamps From The Siege of Mafeking

One of the highlights of our GB & British Empire auction on June 30th-July 2st 2020 is lot 32162, the extremely rare mint Mafeking 6d on 3d Cape of Good Hope with seriffed “MAFEKING / BESIEGED” overprint.

This stamp is priced by Stanley Gibbons at £45’000, and we have placed a very attractive estimate of £15’000-20’000, for one of the key stamps in Mafeking and South African philately.

Only 840 were printed and seemingly the vast majority were used, as mint examples have been missing from many of the best collections of Mafeking ever formed, including the recent fantastic offering of Mafeking in the “Besançon” collection. So this could well prove to be a “once in a generation” offering in auction.

As part of my research into these issues, I searched the online archives of the Royal Philatelic Society, and came across several articles that were printed in “The London Philatelist” as early as April 1900 when information about these issues was still trickling out of Africa.

The same London Philatelist article also quoted the numbers printed of each stamp, information that had come through author A. H. Stamford from the Postmaster of Mafeking himself, and Stamford also published the dates of issue of each of the values in the following month’s edition.

Also worthy of note is that already by August of 1900, The London Philatelist was reporting forgeries of the surcharge:

“The expected crop of forgeries was not long in making its appearance, and Messrs. Bright and Son have shown us the following varieties on Cape stamps :—1d. on 1/2d. (both varieties), 3d. on 1d., 6d. on 3d., and 1s. on 4d., all of which bear the overprint “MAFEKING BESIEGED” in irregularly formed letters and not on a level; the figures of value are also different. Practically, the remainder of the set has since been seen, with a different printing.”

The September edition went further and suggested that two types of the forgeries were now evident, even naming and shaming a Mr Shelvoke in Cape Town and postulating the other as possibly being made in London. The same edition also reported that:

“Unused “Mafekings” are being brought out, as we might expect, and several of the values have already been met with. The value of the used set of these stamps seems to range from about £30 to £40, and it is reported that it is the speculator and not the stamp collector who is dabbling in them, and it will be the former who will suffer from the “fakers” who are already at work at the Cape or elsewhere.”

At the same time, debate seemingly raged about the validity of these provisional issues. One commentator stating the case for their inclusion on the Stanley Gibbons catalogue, includes an interesting detail about unused examples and the reason for their scarcity when he states:

“These stamps have assuredly frequently franked letters not only to other parts of Africa, but to this country, and have therefore undoubtedly performed their postal functions. They were never sold over the counter unused, and, with rare exceptions, seem still practically unattainable in this condition. All these facts point to their bona fides, and their title to admission in our catalogues seems to us at present unassailable. They are in effect postmaster’s stamps, issued like those in America under stress of war…”

As a clue to the popularity of the stamps and the discussion about them, the word “Mafeking” can be found 50 times in the November edition. The issue of their validity even stretched across Europe, with an article published in the German “Der Philatelist” coming under fire in typically English fashion from J. R. F. Turner in this edition:

“DER PHILATELIST having blossomed out into an apparently pro-Boer attack on the historical and interesting stamps issued during the siege at Mafeking… The statement in Der Philatelist, that it was “very doubtful whether more than a dozen specimens of the siege stamps were sent out of Mafeking,” conclusively shows the utter incapacity of the writer to express a correct opinion on the stamps of Mafeking… I have in my possession upwards of fifty letters, franked by between 200 and 300 stamps, that went through the siege to either Buluwayo or the United Kingdom. “ 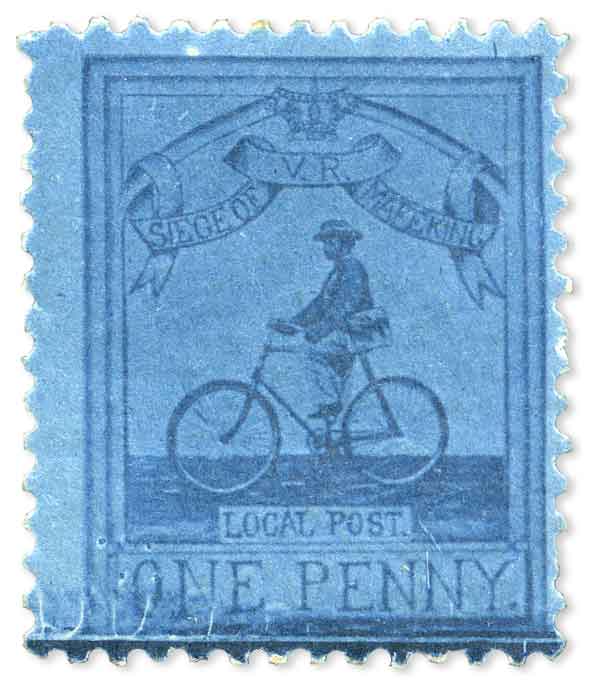 Still in the same edition, a comment is printed from someone who had written to “Ewen’s Weekly Journal”, a merchant from Mafeking and present during the siege:

“The stamps were primarily intended for local postage, and. those used for foreign postage were doubtless only passed by the courtesy of the Post Office. It has been questioned whether i stamps were even needed for local postage, but it seems that they were. For instance, from Mafeking to the Brickfields, where the Cape Police, etc., were stationed, was a distance of about 1,000 yards, and no one was allowed to go there without a special permit. Letters were carried between these places by cyclists, and the postage was, I believe, 1d., though most of the : letters had 3d., 6d., 1/-, etc., put on… The stamps were overprinted one at a time in the stamp office, generally by Postmaster Howat, under the supervision of the military authorities.”

However we now know that his statement that “the stamps were overprinted one at a time” was incorrect, and the printing method of these surcharges was described for the first time in the London Philatelist in the December edition:

“Although the distance between the words ‘MAFEKING’ and ‘BESIEGED’ differs considerably in the different settings used upon different natures of stamps, the type does not appear to have been entirely reset, but ‘only the Spaces increased or reduced ; thus the same broken and damaged letters probably appear in the same positions on the sheets of stamps of each value (they do so in the blocks we have examined). The surcharge seems to have been set up in a row of six, and thus the minor varieties described below are repeated all down the sheet.”

Taking them from left to right we find: 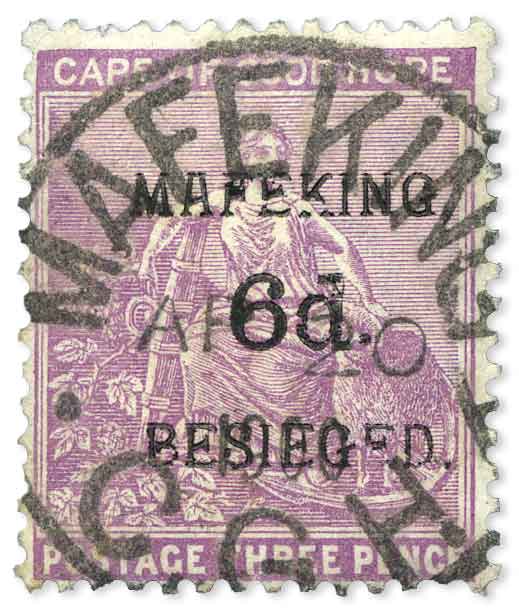 1. In ‘ MAFEKING’ the ‘ E’ is battered at the top, so that the serif of the centre line joins the top line ; ‘ K’ has both legs broken. In ‘BESIEGED’ the third ‘E’ has the lower half of the upright stroke and part of the bottom line gone.

2. All the lettering is fairly good.

There are, of course, other little points also, which will aid in the detection of forgeries. The M.J.’s correspondent also states that the surcharged stamps were genuinely used in Mafeking from March 6th to May 17th only, and that— “All the letters received from Mafeking were checked at the ‘ Base Camp Post Office,’ and again in my office here, with a view to checking the postage. The examining clerk at both offices initialled the envelopes and marked the value of the stamps affixed; all genuine entires, therefore, which escaped the Boers south of Mafeking should be so marked.“”

Other bits of information about the printing did come out in the same letter from the Postmaster that was published with the dates of issue in the November issue, where he also talked about the surcharge varieties (note that the errors referred to are not reversed, but inverted surcharges): 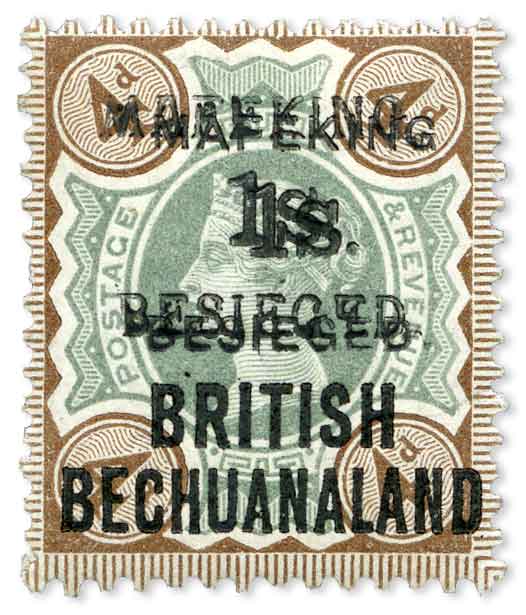 Lot 32166: 1900 1s on 4d green and purple-brown, SURCHARGE DOUBLE, one seriffed surcharge and one sans-serif surchargee

“In going through my stamps I have just come across some errors in the surcharging of the 6d., yellow, on 3d. Home, surcharged ‘ Bechuanaland Protectorate,’ large serif surcharge, reversed; and 1s. on 4d., brown and green, Home, surcharged ‘British Bechuanaland,’ large serif double surcharge; ditto, ditto, large serif surcharge, and reversed (three in all). I had quite forgotten these were in my possession. I remember placing them aside, and being a printer’s error they were not included in the sets I previously sent you—there are five of each of the four double and inverted surcharges.”
“I remember the day these were printed. We were heavily bombarded, and this may account for the printer’s errors. The printer ran a great risk in working in the printing establishment – a large corrugated iron building which was very much exposed to shell fire, and on two occasions was riddled by 94 pdr. shells. All other establishments were conducted underground in bomb-proof shelters, which in reality were only splinter-proofs.”

And he also explains why the surcharge was changed from the serif font to the sans-serif font:

“I have, I see, omitted to explain why the type was changed: it was owing to the type being required for other printing purposes that the small plain black letters had to be resorted to.”

The heated debate in The London Philatelist about these issues continued into 1901, and it seems fitting to finish this article with this quote in the February 1901 issue:

“In conclusion, I may state, with all confidence, that Mafekings will form an index in the philatelic album of one of the most exciting episodes in this country’s history, and in years to come, when the South African War is ancient history, I have little doubt that collectors will point with pride to any specimens they may be fortunate enough to possess.”