Quiz Night with Belgium Epaulettes on

We are all going to come out of this lockdown much better quiz contestants. Video calls are uniting families and friends separated by the COVID19 restrictions, and quizzes are a popular activity of an evening and over the weekends.

With that in mind, here’s a quiz question for you. “What connects a Belgium King, an English Princess, a Russian World Chess Champion, and three Philatelic World Records”?

Do you give up? Answer: Epaulettes.

That’s right. King Leopold I of Belgium was famous for wearing Epaulettes, Princess Charlotte of Wales married the man with the Epaulettes, Anatoly Karpov Chess grandmaster and World champion collected Epaulettes, and there are three world records involving Epaulettes.

So if you get asked to come up with a quiz question, and you’re feeling uncharitable towards the participants, there’s your question. Guarantee no non-philatelists will get that answer right.

However, if you’ve a fellow collector in the ranks, there is a good chance they might have come across the colloquial name given to Belgium’s first postage adhesives – the 1849 Epaulettes, which features our said King Leopold wearing some large Epaulettes (the ornamental shoulder decorations, often used as insignia of rank by armed forces). These stamps were initially produced in two values, the brown 10c and blue 20c. And if like myself you follow a trail of research on this issue you’ll stumble across some enlightening history.

First of all, did you realise that King Leopold took a commission in the Imperial Russian Army, but then joined Napoleon, before re-joining the Russians to fight against Naploeon – perhaps this accounts for our Russian collector taking an interest in these issues? Incredible.

Second, King Leopold married English Princess Charlotte, who, had she not sadly died following childbirth, would have been the Queen of England. Staggering. So Leopold, our Russian General, could have been Prince Consort of England, however went on to be King of Belgium. In which case had Princess Charlotte lived – Belgium wouldn’t have King Leopold and England would never have had Queen Victoria. In stamp terms, the consequences are unthinkable now. No Epaulettes, and does that mean a King on the Penny Black? Certainly, that would mean no Queen Victoria Penny Blacks. Amazing.

Third, and this one really gets my philatelic imagination; Anatoly Karpov, a Russian Chess Grandmaster, who held the World Chess Champion title for a decade solid (1975-1985) and then again for another six years (1993-1999) is a prolific Philatelist, and in relation to this here quiz, assembled and then later sold a world class collection of Belgium and Congo – probably the largest collection of those countries at the time. 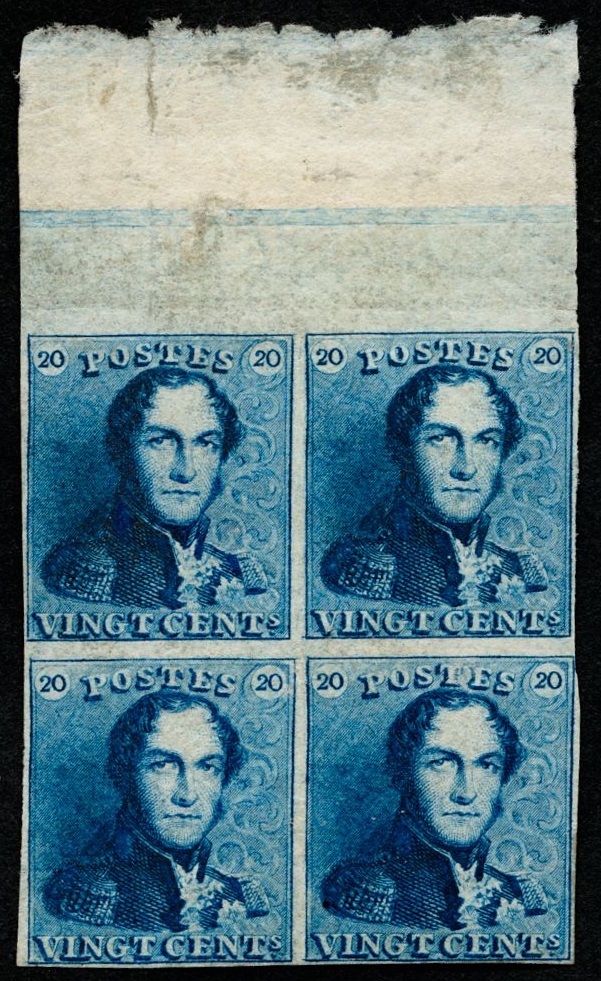 And my fourth point elaborates on what is meant by ‘world class’, because during the David Feldman S.A. auctions in 2011 and 2012, no less than three world records were realised. Two of them for large mint multiples of the 1849 Epaulettes; the featured item illustrated at the top being the pièce de résistance because it sold for €240’000. A spectacular 10c sepia-brown horizontal strip of six with sheet edge and full margins (lot 30032 in our December 2011 auction). A mint block of four of the 20c sold for €162’000 (lot 30025).

There are no superlatives to adequately describe these results. It seems that if you move a King, with big Epaulettes, a few spaces over to where the Queen would have been, and then slide a world champion chess grandmaster in front of the King and his big Epaulettes, and then ask a Swiss Knight (auctioneer) to trit-trot in front of said King and big Epaulettes, the result is not black and white. And it’s not check, or checkmate. It’s world records!

If you want to investigate a bit more about the Belgium collection, the auction catalogues are available upon our website here: