It’s a “Bull Market” for Romania

The Moldavian Bull’s Head stamps are renowned in the Philatelic ring for their rarity. And like their namesake these ‘bulls’, or more accurately ‘Wisent’ which is a European bison, are pretty unsophisticated in form and appearance. Their engraving, and engraver it would appear, as well as the printing process, seem to have originated from a primitive breed of stamps.

These stamps don’t win any beauty contests, and the engineers among us probably wince at their apparent production. However, as you’re about to discover they have had an aggressive influence on the stamp financial market, and unsurprisingly could be destructive if let loose in a philatelic emporium. Suffice to say, no need for any red rags when smashing World records.

In brief, these stamps were the first Romanian postage adhesives, comprising three separate issues, and initially printed in 1858 with a circular design around the bull’s head above a post-horn with four different values; 27, 54, 81 and 108 Parale (fig.1). 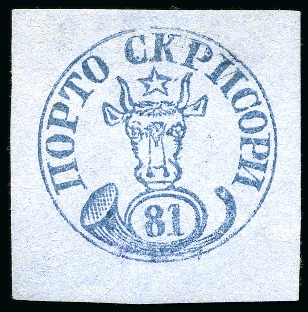 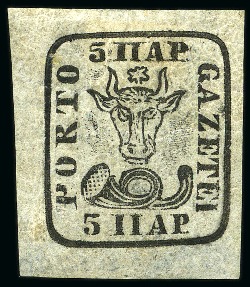 The second issue was released between 1858 and 1862, this time in three values; 5, 40 and 80 Parale. Before the third issue was printed between 1862 to 1864, again in three fresh values of; 3, 6 and 30 Parale. The latter two issues had the head and horn surrounded by a ‘rectangle’ with rounded corners, rather than a circle.

Like all philatelic rarities, there is more to it than what’s summarized above, but this is sufficient for us to take a seat and witness a remarkable demonstration of philatelic muscle.

So, to recap there are 10 values in total, all with a Bull’s Head, all ungainly in appearance, all economically produced, and all rare. A few extremely rare, with certain values from the first issue having single digit survival rates, and as such have attracted much philatelic attention over the years, some changing hands for tens of thousands of Euros.

That was until more recently when the now most famous of all these ‘Bull’s Head’ stamps, the 5 Parale ‘Porto Gazetei’, came charging into the International Auctioneers’ arena and quite literally ‘gored’ all previous contenders.

Because in 2006, an 1858 edition of Zimbrul şi Vulturul, which was a 19th-century Romanian newspaper aptly named ‘The Wisent and the Eagle’, and crucially franked with an unprecedented eight 5 Parale type I stamps from the second issue on bluish paper, became the most expensive item of Romanian philately ever sold at auction. Now immortalized as ‘The Large Journal’, it sold for (just over) a staggering US$1’000’000. What they in the financial realm would most definitely call a “Bull’s Market”!

First recorded in Vienna in 1896, the ‘Large Journal’ eventually passed into the Schwarz collection, and was sold by Köhler in 1928 for an astonishing 56’000 RM (against an estimate of 10’000 RM). Maurice Burrus, the Swiss tycoon who assembled a phenomenal collection of world classics, owned it for several decades. It was sold at the Balasse auction of his collection in 1962 to Tomasini, thence to Künzi until its sale in 2006.

This just goes to show that appearances can be misleading. In this age when attractiveness and technical prowess are esteemed highly, our Moldavian Bull’s Head stamps are a sturdy reminder that sometimes it doesn’t matter how sophisticated you might be, you just need a bit of primeval brute breeding. A very rare characteristic indeed!

If you want to get under the skin of these Bull’s, then we have plenty of background detail and technical data available for you to digest at your leisure in an article we prepared earlier called “Classic Romania”.