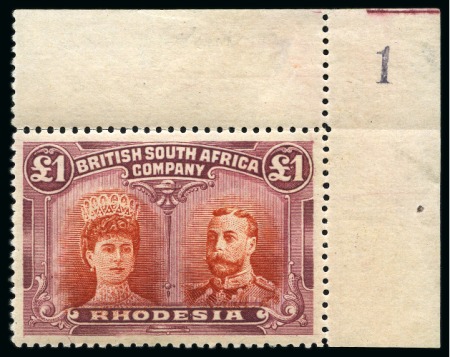 Our British Empire section of June 4th-7th auction series offers several key lots and rarities from the Rhodesias, none more attractive and desirable than lot 50567, the unique Double Heads £1 error of colour from the top right hand corner of the sheet with sheet number. This error was discovered in 1924 when Stanley Gibbons acquired all of the remainder of the Double Heads, and two sheets of fifty stamps of the £1 were found to be in scarlet and reddish mauve (instead of crimson and slate black). The stamps from both sheets are said to possess gum disturbance to some degree, with this example having only a minor trace of disturbance.

An even rarer and Rhodesia rarity on offer is lot 50569; the £1 Double Head in the issued colours but with the very rare perf.15 variety.

Also of note are several Double Heads with plate varieties including the “gash in ear”, which appears as a straight stroke in the Queen’s right ear. It is quoted in a footnote in the Stanley Gibbons as being worth 3 to 5 times the value of a normal stamp.

There are also varieties and errors as well as collections from Rhodesia, Southern Rhodesia, Northern Rhodesia and Rhodesia & Nyasaland in the auction that may well be of interest.

This section will be auctioned on Friday 7th at 3pm in Pounds Sterling. If you have any questions or want scans of the larger lots please do not hesitate to contact us.