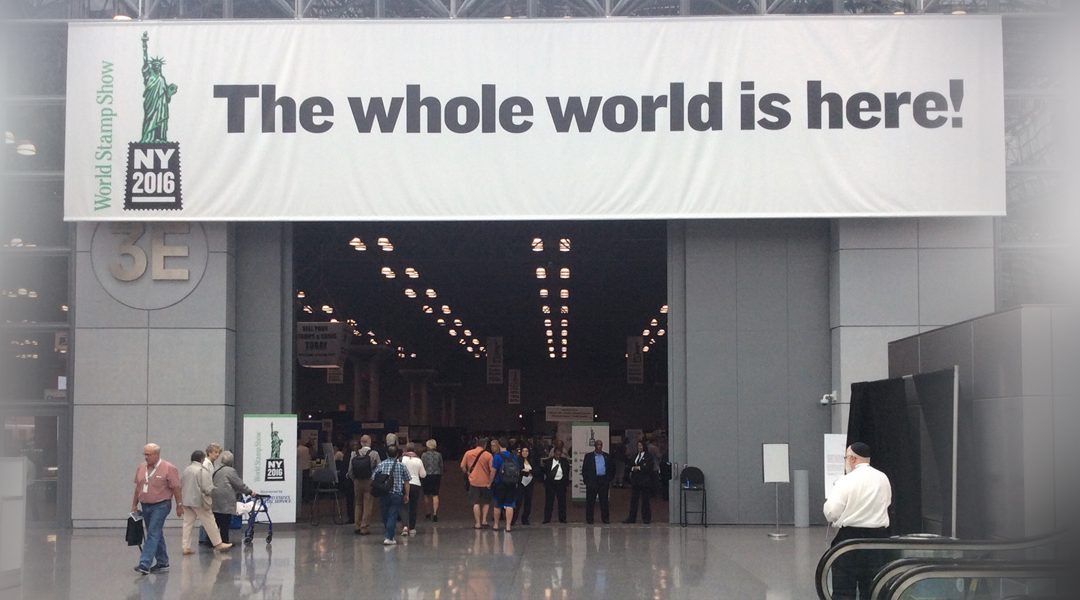 The preparation of packing everything for our trip to New York took several days, but come Friday morning, all 15 bags were packed and weighed, ready for our 9am flight. David, Marcus and I were on the same flight with United Airlines, but frustration soon set in when I realised that the entertainment system wasn’t working!!! So the 9 hour flight time was spent mostly talking about stamps and the pending EU referendum in the UK…

Thankfully immigration was a doddle, and some stern words from the customs official didn’t halt our progress from Newark to the Javits Center in Manhattan. The vast area set aside for the stamp show in this massive complex was a surprise. As was the redevelopment of the neighbourhood since Marcus’ last visit (about which he had said that “sketchy was an understatement”). We quickly found our two stands and split in to two to get them set up. 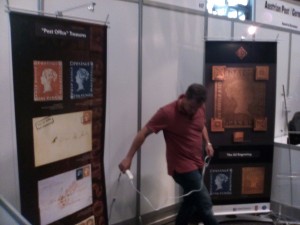 Me and Dan had the task of constructing the stand for the Mauritius Post Office printing plate. The plan for the stand was immediately binned due to the unusual problem of the next door neighbour, the Austrian/German Post Offices, having to enter their stand through the side of ours… The result was a great piece of improvisation and vision even if I do say so myself. And CEO Dan even got stuck in, with a career as an electrician surely beckoning.

Back on the main stand, things weren’t going quite so smoothly. The new fabric displays were proving tricky to put up effectively, and Marcus had taken a pair of scissors to one of them… Luckily Anders arrived shortly after and came to the rescue. With some perseverance he managed to get them looking smooth and the corners stuck down properly. Unfortunately his efforts were in vain when we turned up the next morning and they’d fallen down. A difficult game of furniture Tetris still left us a little dissatisfied with the look of the stand as we left to left to go to our hotel.

Although listed as one of the official hotels, the Holiday Inn in Secaucas, New Jersey, was a 15 minute and $60 cab ride away. And at breakfast the next morning we realised, unsurprisingly, that we were the only stand holders staying there… 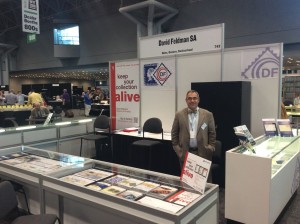 The following morning before the show started, we made some changes and added a new display cabinet. We all felt much more happy with the look of the stand and when the doors opened we were ready to jump in to action to deal with the first wave of collectors, with everyone excited of talk before hand that over 35’000 people had signed up for tickets. And the day didn’t disappoint! Helpfully everyone had a name badge, which helped prevent any awkward moments when you can’t put a name to the face (unless they were an exhibitor or dealer and the ID badge which was hung around the neck and facing the wrong way). Note to the organisers: make them double sided next time! This would have stopped the brash security guards from shouting: “Mam, show me your badge!” to the poor lady who had the audacity to have hers facing the wrong way!

Although the footfall was great, what was a disappointment to me about the Javits Center was the lack of anything interesting to eat at lunchtime. There was a cafeteria and a Starbucks but nearly everything had cheese in it (I’m the only person in Switzerland who doesn’t like cheese by the way) and the prices made Geneva look cheap! 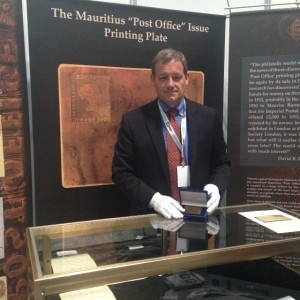 The constant stream of people wanting to talk to David or Marcus meant poor Dan was stuck on the Mauritius “Post Office” printing plate stand, with his WhatsApp cries for help left unheeded. Alas! He was not by himself; as often he had a crowd listening to him orate about the history of the plate and our expectations for its sale in December, with enthused listeners often coming back with more friends to hear Dan regale the story all over again. 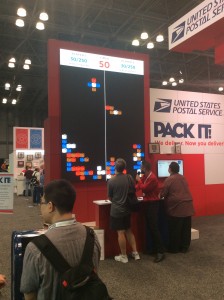 Day 2 was just as busy as the day before and I again found myself behind the stand all day talking to a multitude of clients. But by this point, the US Post stand had started to annoy me (and probably everyone else in the vicinity). They had what I would describe as their own version of Tetris playing on a 15 foot screen called “Pack It”, as well as a running commentary with such classic catchphrases such as “Let’s pack It!” and “Here we go!” ringing throughout the large hall. This torture continued for the rest of the show…

On day 3 we finally felt brave enough to take the bus into Manhattan, although it was basically a coach. As it was already full we had to stand as the bus hurtled its way from New Jersey to New York through the Lincoln Tunnel. Some breaks in the crowds meant I could spend some time in the Court of Honor (sic) to see some of the fabulous collections on display, including of course the famous 1c Magenta of British Guiana. The layout and the way the album pages were presented didn’t do justice to the material. As Marcus mentioned, the box containing the British Guiana 1c looked more like a collection box in a museum rather than the exhibit itself. Of particular note was the US Postmaster Provisionals from Erivan Haub which included the Alexander Blue Boy that we sold for $1m in 1981 (the first philatelic item to fetch a million) and the Joseph Hackmey’s collection of France.

But my personal favourite was a mint example of the Germany unissued Audrey Hepburn stamp (which was famously withdrawn after the family disliked the image of her smoking in Breakfast at Tiffany’s). 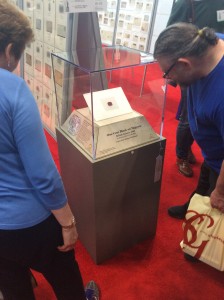 Buoyed by our previous day’s journey, we again decided to take the bus. However this was the first working day of the week after Memorial Day and instead of taking 15 minutes it took an hour! The surprises continued when we found a $415 invoice waiting for us on our stand for “material handling”. We soon realised this was $415 simply for them to wheel a cabinet over to us; about 2 minutes labour. We soon realised that nearly every stand holder had been underhandedly charged for the moving materials without any prior notice which caused a rumbling among the dealers especially when some had been charged 10s of 1000s of dollars!

The day finished with a dinner held by the Royal Philatelic Society of London at the Loeb Boathouse in Central Park. A lovely venue for such an evening, although everyone was relieved to sit in the air conditioned dining hall after the welcome drinks had been served outside in the stuffy air. Wanting to look smart (and not because I didn’t read the invitation) I turned up in my evening suit. Only a couple of people made comments about my over-dressing and my resemblance to the staff so it wasn’t too embarrassing. 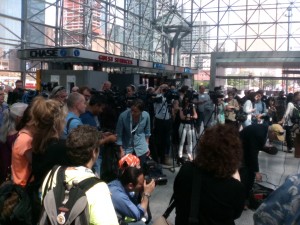 By day 5, the number of visitors to the show began to subside and I finally had chance to look around and say hello to the other stand holders. Most of whom hadn’t realised I was here because they hadn’t seen me. The big story of the day was the sale of the Inverted Jenny for $1.35m plus taxes, said to be the finest possible example and the unsurprisingly the highest price paid for a single Inverted Jenny. There was also a presentation held to handover one of the famous stolen Inverted Jennys which had recently turned up in Ireland. The story had obviously caught the attention of the media, as several camera crews were there from the likes of Fox and CNBC, and we had even seen it on the news on the screen in the cab on the way to the show!

[link_action link=”https://www.davidfeldman.com/shop/panama-the-first-issues-as-a-state-of-colombia-their-forerunners-1807-1892/” title=”GPC – Panama: First Issues as a State of Colombia and their forerunners”]» Buy the GPC book of Alvaro Castro-Harrigan’s collection of Panama in our shop[/link_action]