The “Bombay” Cover – an Aristocrat of Philately 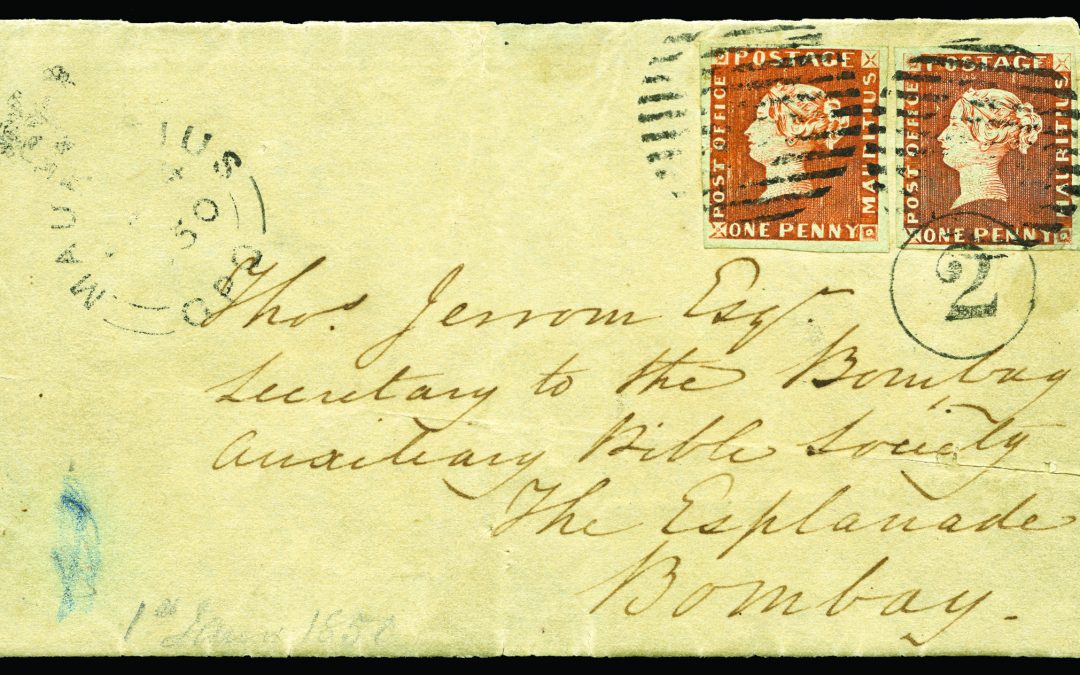 The “Bombay” Cover – an Aristocrat of Philately

There are only six covers recorded with the first, “POST OFFICE” issue, printed one at a time from a small plate of two subjects, one a 1d value, in vermilion, the other a 2d, in blue. Three of the covers are single frankings of the 1d value; one is in the British Library (Tapling Collection), another in the Royal Collection (since 1904). The third, known as the “Ball Envelope,” is ex Kanai, and was sold by this firm in the last decade.

A single franking 2d cover to Bordeaux is in the German Postal Museum, while the famous 1d + 2d franking, also to Bordeaux, was the highlight of the Kanai collection, and achieved the highest price ever obtained by a philatelic object, CHF 6’250’000, still the record for any philatelic cover.

Finally the cover which is the subject of this posting, is an unusual item for several reasons: first it was sent in 1850, three years after the issue (all other covers were posted in 1847); second, it was sent eastbound, to Bombay (all the other covers were either used on the island (including a large piece with  the 2d) or to Bordeaux. Third, the quality of the stamps is remarkable: each has four large even margins, very unusual for this issue, and brilliant original colour. Finally, the two stamps differ in impression: the right one is very sharp and clear, the left one a bit heavier and slightly lighter in colour.

Its provenance includes its discovery in 1897 in an Indian bazaar, soon passing through the hands of dealer W.H. Peckitt to Vernon Roberts, later owned (1906) by Worthington, who sold it to Alfred F. Lichtenstein in 1917. It was considered one of the most important items of his collection. When this cover was sold in 1968 as Lot 1 of the Dale-Lichtenstein collection, it brought an astounding $380,000 and ended up, a year later, in the hands of Raymond Weill.

Offered again at auction in 1989 as part of the Weill Brothers stock,  it was bought in for CHF 2’600’000)and subsequently sold to Dr. Chan Chin Cheung, who held it until its sale in 1996 to Guido Craveri, who exhibited it in New York at Anphilex ’96 as one of the Aristocrats of Philately.

Subsequently sold to an unidentified private collector, and soon to be offered by Private Treaty though our company, the “Bombay” cover remains the “ne plus ultra” of condition for this very rare classic issue, and offers as well a great deal of pride (and fame, if desired) for its next owner !