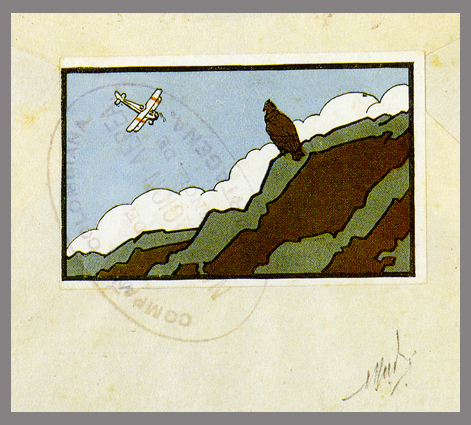 There are many airmail issues that have been offered or sold as “rare.” Examples include the 1925 25c on 10c “Black Honduras” (only 2 reported, one last sold at auction in 1994 for £104,500); the USA 24c “Inverted Jenny” (though nearly 100 are available, its popularity ensures prices of US$100,000 to US$1,000,000 depending on the centring and gum condition); the Switzerland 1938 “Pro Aereo” Surcharges in mint condition (dozens exist; have realised several thousand Euros each); or the Russia Moscow-San Francisco Flight (Levanevsky) inverted overprint error with lower case “f”, part of a block of four which is considered unique. However, there is one airmail stamp that can’t exist mint as a stamp, and the unique example is tied to a flight cover dated on the date of issue.

In Colombia in 1920, the Compania Colombiana de Navegacion Aerea (ususally abbreviated “CCNA”) needed to produce stamps for prepaying the airmail fee of 10c on covers with Colombian regular postage franking, to be flown on February 22, 1920. The company obtained a stock of Curtiss Aircraft company publicity labels; though 20 different were available, just 9 different were overprinted with the company name (in 3 lines in one operation) and with the denomination (“Porte Aereo $ o,10”) printed separately (located where appropriate on each stamp). It is likely that fewer than 100 each were printed, most of which were used on covers dated Feb. 22 or a little later in 1920. The simple designs, large size and bright colours have caused the set to be nicknamed the “Cartoons.”

One cover was franked on the reverse with the “Condor on Cliff and Biplane” design (as Scott no. C8) but without the CCNA overprints. It is tied to the cover by the oval CCNA cancel, faint but clearly legible, while the other side shows the Colombia 3c franking tied at Cartagena on February 22nd and addressed to Barranquila. This is the cover that led to the Scott listing for no. C8a, and a similar listing in the Sanabria airmail catalogues. 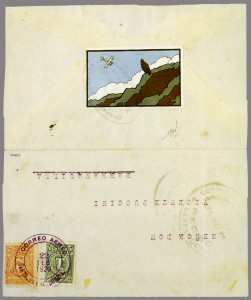 The cover came to light many years after it was used, and by the early 1960s became part of the outstanding Colombia airmail collection formed by the late Alex Rendon. It is signed by Herbert Bloch, with 1979 Friedl Committee certificate. Rendon sold his collection intact to the late Jack Boonshaft, and the cover was offered as lot 2077 of the 1993-94 Harmers of London auctions of the Boonshaft collection. Now it is reportedly in the hands of a distinguished philatelist from Colombia.

Although several collectors have written about or collected the Colombian airmails, there can only be one collector at a time who can claim to own the unique example of a “Cartoon” used without overprint, one of the rarest items in Colombian philately – and probably the “World’s Rarest” airmail stamp.