After an 18 hour journey from Geneva, it was a relief to get through Immigration and Customs to find the Philakorea information stand at Seoul Incheon airport. Their bright orange uniforms brightening up an otherwise miserable looking evening outside. With their much-appreciated help I was escorted to the official show hotel which they had arranged for myself and David (special thanks to Han Lee).

Despite the jet lag, breakfast on the morning of the show was a treat! Organised by the committee, an extensive buffet was held in the grand dining room for the participants, jurors and commissioners. Chatting with my fellow diners, I found out that the journey to Korea had been even more arduous for some, with a couple from Australia taking three flights and 24 hours to get there! 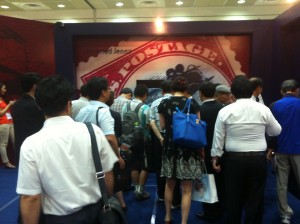 The show itself was in an exhibition arena 20 minutes walk up the road. The effort and expense of Korea Post was quickly apparent, with several areas purposely built for the various features and events of the show. Including a special section for the “Gems of Philately” which we brought to Korea for display on behalf of their owners. The famous “Inverted Jenny” drawing the crowds in particular.

Never before had I seen so many women and children at a stamp show! There seemed an active and busy programme for the kids, with the addition of live music being played for most of the day (whether we enjoyed it or not, we had no choice as it reverberated around the hall).

The evening’s entertainment was the reception dinner where the organisers made speeches welcoming all the guests. Again, not wanting to sound like an old man, but loud live music was played throughout dinner making conversation slightly difficult. Retreating to the bar made this somewhat easier more and free-flowing…