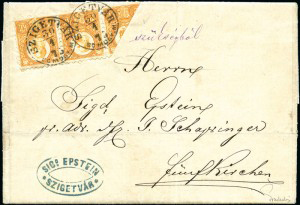 Sometimes, despite the best intentions of the postal administration, things happen…

In the small Hungarian town of Szigevar, at the end of January 1873, the post office ran out of the 5 Krajczar postage stamps – crucial to prepay inland single weight letters. So, in at least one case, someone (whether clerk or sender is not know) proceeded to apply a partial strip of two and one half 2 Krajczar values, which were neatly cancelled by two strikes of the 30 January 1983 town cancel, and write the Hungarian word “szükségeböl” alongside them – meaning “emergency.”

The folded letter has an oval cachet for a commercial firm in Szigetvar at the bottom, below the bisect franking, and is backstamped in Pecs the next day.

This cover is the ONLY KNOWN such usage, not only from this town, but is believed to be the only example of a genuine bisect usage of this issue known to the Austrian expert Ferchenbauer. Another expert, Ferenc Orban, points out that probably due to the “emergency” endorsement, the cover passed through the post without incurring postage due, though bisects were technically forbidden.

Estimated for only €15’000 – €20’000, this cover from the engraved 1871 Second Issue merits consideration as it is unique, unusual and attractive, and if someone is contemplating future exhibiting or collecting of classic Hungary, it is clearly one of the “must have” items – rarer than the famous Tokay roulettes on Austria (used in Hungary, several covers available), and at roughly the same price level as the later mint “inverted Madonna,” of which about a dozen are known.