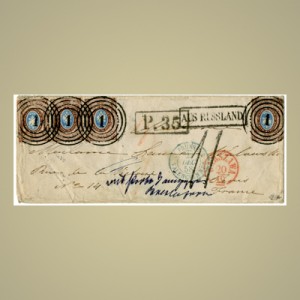 1858 Cover from Warsaw to FRANCE, addressed to Mrs. Wolowski and franked with four Russia 10k cancelled by clear strikes of “1” in target. Sent by the French politician Louis Wolowski, former Polish citizen who was sentenced to death after the 1830 Polish Revolution, and settled in France where he married a French woman. He founded the Crédit Foncier and was elected to the French Parliament in 1848 and became a member of the French Institute.

Offered with 1851 cover from Paris to Prussia franked with 1849 1F carmine showing wide margins, with rare “Assemblée Nationale” cds addressed to Mrs Wolowski in Berlin, plus three covers from Poland to France, 1852-58, from the same archive.

This cover has been offered in our next auction on September 19, 2012.