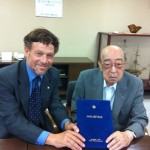 One of the very few great philatelists who became a legend in his own lifetime, Mr Hiroyuki Kanai, has sadly left us. Despite the distance, the language and the culture differences between the country and city where he lived and worked and the subjects he championed, Mr Kanai formed some of the very best collections ever known for such classic countries as Mauritius, New Brunswick and Nova Scotia , Trinidad and Finland besides his fantastic assembly of Japan classic issues.

Engineer and industrialist, Hiroyuki Kanai succeeded his father as President of more than ten companies in his home city of Osaka,  Japan. He won the highly respected Japanese Medal of Honour awarded personally by Emperor Hirohito.  Today one can travel through the “Kanai Tunnel” built on one of Osaka’s highways as a tribute to his philanthropy.

Already at the age of 13 he began as a serious stamp collector assisted by his mother and his much needed pocket-money. He founded two philatelic societies while at University. After the war he gave up the theme of general world collecting and concentrated on British Colonies and Japan classics. He not only developed and built marvellous collections but deeply studied each and every subject he undertook as a collection, wrote articles and even one of the most formidable reference works on Mauritius Classic philately. Mr Kanai was the only private collector managing to acquire and own six of the first issue “Post Office” stamps at one time.

I had the great privilege to be amongst the few Westerners to whom he gave his confidence. There were never half measures. When it came the moment he decided to consign his fantastic Mauritius collection, he simply had the 4 incredible volumes delivered and left at my hotel room, without note or receipt. So deep was his trust once he gave it !  I suppose I had again a great privilege, though I could not know it at the time, to be one of the last fellow philatelists to visit with him when we were together at Osaka last summer just following the Yokohama Exhibition.

In 1991  Hiroyuki Kanai was awarded the Blue Ribbon Medal of Honour from the Emperor, and two years  later in 1993 he was been elected to The Roll of Distinguished Philatelists.  In his distinguished positions he was always great leader and sympathetic friend.

Known and admired by so many of his peers and students,  my few words may only add a small drop to the waterfall of praises and tributes I anticipate will fill the philatelic columns at this time. Heavier are the condolences and sadness I’m sure I share with so many and most particularly, his family, his wife and sons, his employees and all those who loved and admired him.