One of the “Crown Jewels” of Classic Denmark 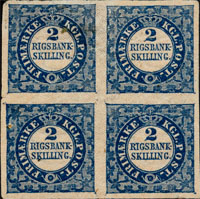 The second Danish stamp issued was the 2 R.B.S. (Rigsbankskilling) value, which first appeared on April 28, 1851, nearly a month after the 4 R.B.S.  Its purpose was, at first, to pre-pay delivery of mail “within the ramparts” (i.e. within the city walls) of Copenhagen. Later, it was used to make up the rates needed to prepay covers to and through Prussia (including Danzig) and to Russia (known to St. Petersburg), by treaty, before it was exhausted and replaced by the 1855 2 Skillings value of similar colour and design.

It was printed by the Royal printers, H.H. Thiele & Company, and was designed by M.Ferslew. Because he was late (it was intended it be issued along with the 4 R.B.S., he created a matrix in the form of a vertical block of 10 cliches, and used this block to create stereotypes in blocks, which were nailed to a supporting board to create two panes of 100 (the same format as the 4 R.B.S.) now called Plates One and Two. Before his sudden death, Ferslew actually printed only an engraved burelage; Thiele completed the printing, and it is recorded that only 101’800 stamps were printed with Ferslew’s burelage, and a further 377’500 used Thiele’s typographed burelage.

This stamp has been plated, thanks to proofs of the defaced plates and one large multiple in the Danish Postal Museum. Four positions (three from Plate I) show major retouches, and another four are substituted clichés, when a stamp of the wrong “type” replaced a damaged cliché (all from plate I). The block comes from Plate II, positions 23-24/33-34 showing cliché “types” 3 & 4 over 5 & 6.

Mint multiples of either the Ferslew or the Thiele printing are very rare. The DAKA catalogue, prepared by the late expert Erik Paaskesen at th4e turn of the last century, listed a strip of three as the largest mint multiple of the Ferslew printing, and one strip of three and two blocks of four of the Thiele version. There is reported to be a large mint block as well in the Danish Postal Mueseum. Recently, Carl Aage Möller has written about a reconstructed corner marginal block of four made up of two singles and a pair.

Of the two intact mint blocks in private hands, the one shown here (from our December 2011 Geneva Auction series) is considered the finer, and has a long and distinguished provenance: it was owned by Ferrary, Lichtenstein, Engellau and Christian Andersen. At the auction of the latter’s collection, it was sold to Per Lorentzen, who paid over US$250,000 (in competition with Dr. Gene Scott), and it was one of the top four “gems” of his Grand Prix exhibit of Denmark. Since the auction of his collection, it was owned by Jussi Tuori.

It was certified in the last 60 years by Sven Grönlund, Slavomir Kaiser, Dr. Arno Debo, Lasse Nielsen and Carl Aage Möller. The other privately-owned block is believed to be held by the heirs of the late philatelic expert and connoisseur Walter Engel.

The evenly large margins, fresh colour and large part original gum of the present example make it a stand-out item in the entire realm of Classic Philately, and certainly one of the few “key” items for any Grand-Prix level traditional exhibit of Classic Denmark-

This stamp will be offered in our Geneva Autumn Sales which will be held on December 6-11 .