The “Birth Certificate” of Denmark

The first issues of Europe during the Classic period started as a novelty, as news of the “Penny Black” and its financial success spread quickly, to a subject for debate and law-making (to define an adhesive stamp’s uses and context), to essays and proofs and finally to the issued stamps. And of course, the post offices throughout each country or State had to be informed what these “gummed bits of paper” were, and how to use them properly.

Denmark’s first issue was mandated by a Postal Law which envisioned the first stamp, for ordinary mail, to be issued on April 1, 1851. Denominated “FIRE RBS” (4 Rigsbankskillings)the stamp was designed and engraved by M.W.Ferslew, court engraver, who worked for the royal printers, H.H.Thiele & Co.

Before he died, Ferslew prepared two large printing plates each containing two panes of 100 (10×10), which were to be used for printing. The sheet now known as “Plates I & II” was the first to be used, together with a special engraved “burelage” (underprint) to deter counterfeiting. Only those examples of the First Issue showing engraved burelage can be considered the First Printings (popularly called “Ferslews”) of the first stamp of Denmark. 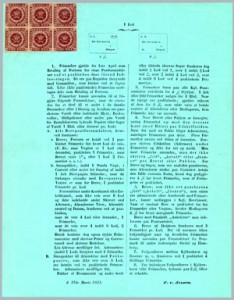 The only example of the famous "Birth Certificate" of Denmark's First issue in private hands.

On March 27, 1851, only a few days before the stamps were to be issued, a circular on blue paper spelling out how the stamps were to be used, and with a block of six stamps affixed. It mandated that unfranked letters were going to be charged 6 RBS (a 50% penalty), and showed that the stamp had to be affixed at the top right corner, or it would be ignored.

The denomination of the stamp and the mandated placement were immediately found offensive by the German-speaking inhabitants of the Danish “Duchies” (Schleswig, Holstein & Lauenburg) which had rebelled only a few years before. Many of the German States routinely allowed or mandated placement of the stamp at top or bottom left of a cover,  and the Second issue of Denmark was designed to show the facial value as “4 s.” thus ceasing giving offense because it could be read correctly by either language group.

Of all the most important items in Danish philately, the “Birth Certificate” is without peer.

There is no other example of this historic document in private hands, and it bears a mint block of six of the FIRE RBS from Plate II, the largest known mint multiple. Only one other block of this size is known, and when one of our staff examined it at the Christian Anderson auction, it too had a few tiny traces of blue paper (since brushed away) that indicated it probably owed its survival as well to another “Birth Certificate” since destroyed.

Clearly shows that if the stamp is affixed at top right, the fee is 4 RBS, while if it is placed at bottom left, the cover will be charged 6 RBS.

Provenance: Illustrated by Schmidt-Andersen (1951); owned by Mott, Engellau, Dr. Gene Scott and Peer Lorentzen (who paid about $300’000 for it in the Scott auction)