In our May 19th-21st 2011 Auction series, we have the Samir Fikry Collection of Postal Services in the Suez Canal Zone. Including some of the rarest and most attractive items in Egyptian philately. The following is a brief history of this massive undertaking. 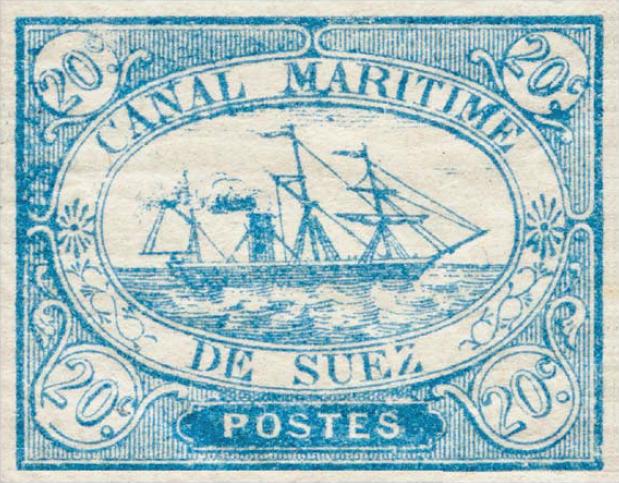 Nowadays, over 140 years after it’s coming into existence, the Suez Canal has developed into an obvious feature of geography, comparable to the Straits of Gibraltar. However, for the greater part of the 19th century it was barely a dream. And it was not the English who dreamt about it, but the French. Although the direct waterway to India eventually proved to be one of the most important pillars of the British Empire, conventional thinking in early Victorian London did not like the idea. The dreaming, though, was done by the most famous of Frenchmen, the likes of Talleyrand, Napoleon I, Saint-Simon, Thiers, Napoleon III, and, of course, Ferdinand de Lesseps, following in his father’s footsteps.

To understand what seems to be one of those inexplicable ironies of history, it helps to have a feeling for the typically French delusions of grandeur. While Britannia ruled the waves, the French revolution was less a thrust of power and enrichment than the celebration of science and rationality embodied in the idea of progress. If Bonaparte’s engineers had not miscalculated the level of the Red Sea as opposed to the level of the Mediterranean, work at the isthmus would have begun then and there. If the disciples of Saint-Simon had not elected Cairo of all places to make a stand for the total liberation of womanhood, perhaps the Egyptians would have lent an ear to their clamours for “a faster way to hold hands with our brethren in China”. If, in 1840, a bellicose Adolphe Thiers had not dangerously tried to cater to French public opinion bent on revenge for Waterloo, Lord Palmerston would probably have been more lenient with Mohammed Ali and less adamant against the Canal. And finally, if Napoleon III had not indisposed the Divan at Constantinople by promoting direct French intervention in Syria, Tunisia, and the Holy Land, Ferdinand de Lesseps might have obtained from the Sultan the necessary firman (royal decree) to start work at an earlier date.

To measure the disbelief de Lesseps was up against, let us relish in the comment made by the London Daily News in 1855, after one of his fund raising tours to the City: “The literature of fiction is not dead in the land of Alexandre Dumas. The most extravagant romancers are children com­pared with the great discoverer of new Pelusium (de Lesseps*), trying to convince his audience that 250 sick Europeans and 600 conscripted Arabs will accomplish this stupendous work, without money, without water, without stones.”

In 1854 and 1856 Ferdinand de Lesseps had obtained a concession from Viceroy Mohammed Said Pasha, the Khedive of Egypt and Sudan, to create a company to construct a canal open to ships of all nations. The Suez Canal Company (Compagnie Universelle du Canal Maritime de Suez) came into being on 15 December 1858 and work started on the canal on April 25, 1859. 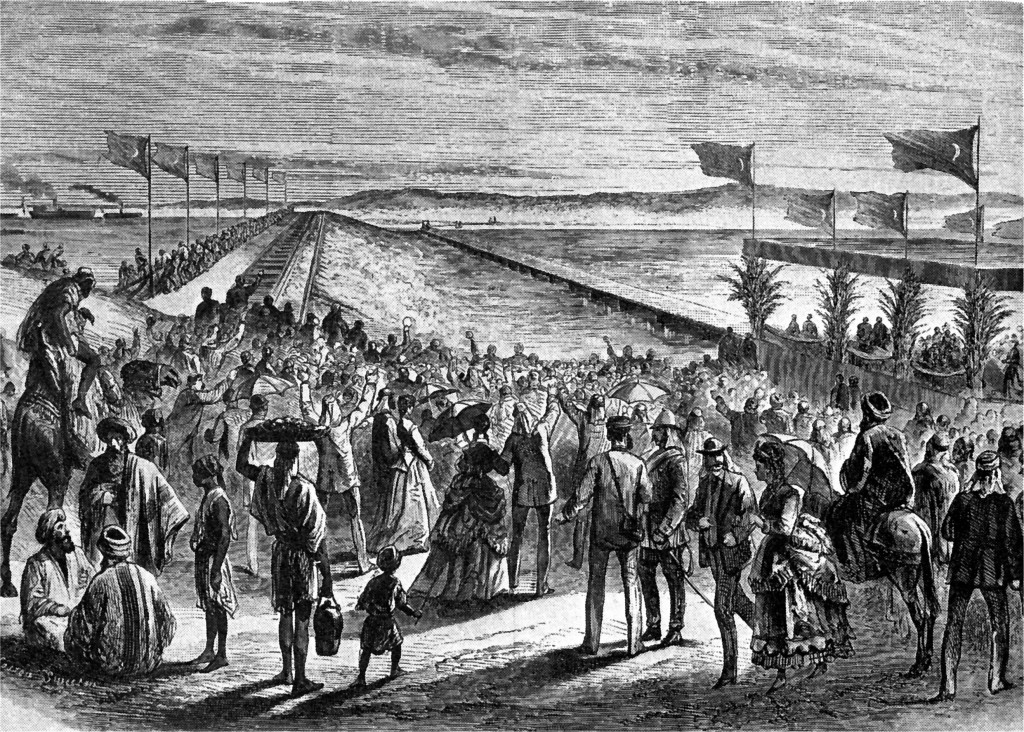 Inauguration of the Suez Canal in 1869 at Port Said

The canal opened to shipping on 17 November 1869, and not only had the Canal been inaugurated in grand pomp, in the presence of de Lesseps’ cousin, empress Eugenie, but also world opinion had changed drastically as to it’s commercial and strategic significance. On Sunday, November 14, 1875, the British Prime Minister Benjamin Disraeli was supping with his old friend Lionel Rothschild at 148 Picadilly, as they did almost every weekend. During the main course the butler approached with the telegram salver. It was a message from one of the Barons’s Paris informants. “French government hesitating.”

Both men instantly knew what it was all about. The debtridden Khedive wanted to sell his 177’000 Suez shares for one hundred million gold francs. Since he needed the money desperately, he would be in no position to refuse an equivalent offer of four million pounds if it came within 48 hours. Disraeli was aware that the French, still reeling under the crushing 1871 defeat of their armies by the hands of the Iron Chancellor Bismarck, would need more time than that to raise such an amount. On the other hand, the popular Prime Minister was sure of the support of his Queen and his cabinet. He looked at Lionel. They had stopped eating. The Baron nodded. A guttural, lengthy “aahhh” escaped his lips. “We will take them” concluded his friend.

In those times, no country in the world would have been able to dish out four million pounds in cash within 48 hours. But N. M. Rothschild & Sons could do it. With one stroke of pen, Her Majesty’s Government obtained control of the Suez Canal Company. And the Queen received a tri­umphant note from her beloved “Dizzy”: “You have it, Madam. The French Government have been out-generalled. From now on, the globe’s life­ line is yours.”

(*) Reference to the Pharao Sesostris, who lived in the 19th Century B.C., and whom Herodot credited with the construction of the very first Suez canal. 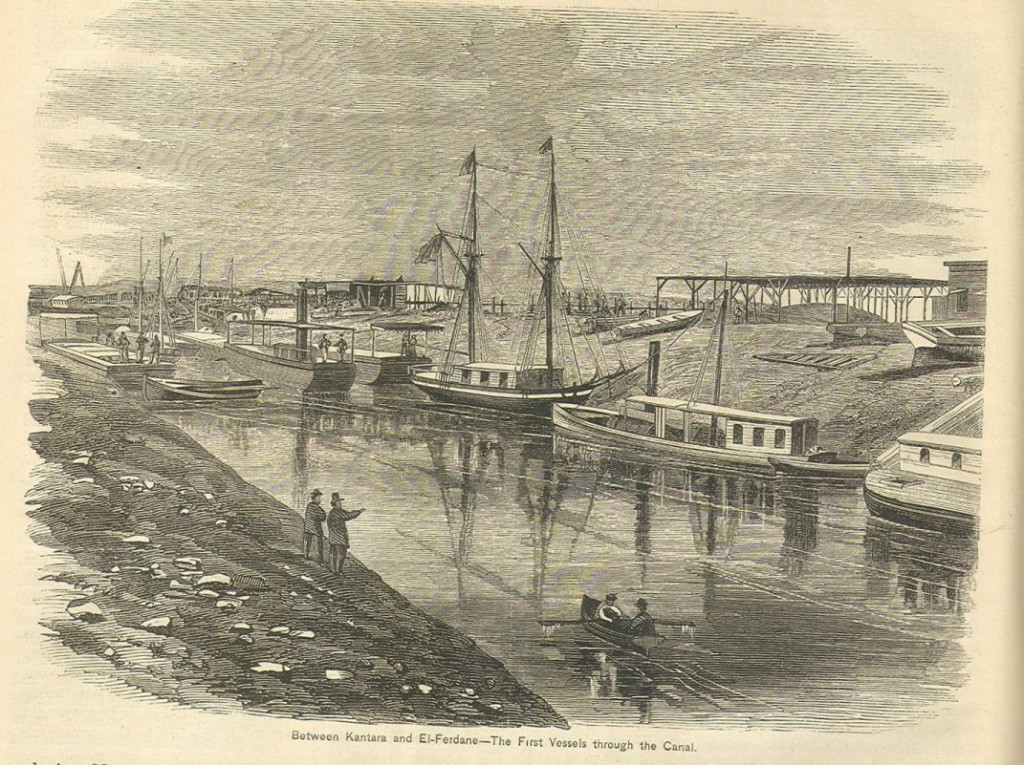 The Suez Canal Between Kantara and El-Ferdane

One might wonder why this place, for hundreds of years, had remained a forlorn little fishing village. At the northern tip of the Red Sea it could certainly have developed earlier into a busy transit harbour between East and West. The explanation is somewhat technical. Prior to 1835, the frightlully hot climate, the rocky and uncharted seabed, the numer­ous and fierce bands of local pirates, the unpredictable winds (with endless stretches of absolute calm) proved too much of an obstacle for the ordinary sailing ship. Since Waghorn knew about this, he first planned to start his Overland Road not in Suez, but several hundred miles to the south in Cossair, which would have imposed some strenuous mountain and desert crossing in order to reach the Nile. It finally needed the arrival of the paddle-steamer to radically change the problem, awaking Suez from it’s dreamy past. 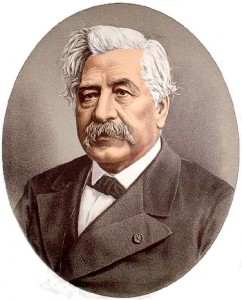 Ferdinand de Lesseps, without whom the Suez Canal would never have taken shape in his century, died insane at the respectable age of 89 years. His life had been graced by three great strokes of luck: to have been the son of the first French consul in Egypt, a friend of Mohammed Ali, to have been a distant cousin of Eugenie de Montijo, who became the wife of Napoleon III, and to have been able to win the total trust of Said Pasha, who as a little boy had depended on him as a friend, protector and spiritual guide. De Lesseps knew very well how to take advantage of all these circum­stances, which made him the most popular man in France at the out start of the 3rd Republic. His tragedy was to believe that miracles could happen twice. The ruinous Panama Canal turned out to be quite another matter. After having sunk over one billion gold francs of public contributions into his American dream with­ out any tangible results, and before even his condemnation for fraud and embezzlement, he totally despaired, to the point of losing his mind and his life.