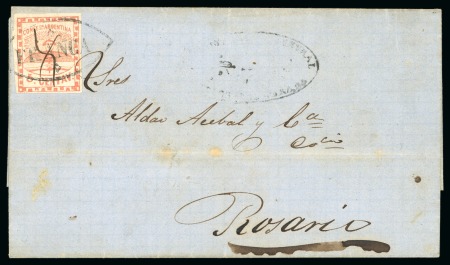 1858 5c light red, ample to predominantly large margins, on 10.10.1859 cover from Victoria to Rosario, cancelled in manuscript featuring two crossed strokes probably applied at Victoria, being also tied by “FRANCA” ellipse of Paraná with matching large oval of the postal administration alongside; a rare usage of two different cancellations on the same adhesive -the pen cross cancel was probably not considered sufficient with the stamp being subsequently cancelled in transit at Paraná-; we can not state with confidence that the pen cancellation was made on dispatch at Victoria, since it could have been also applied in transit at other locations; cert. Del Mazo (2010); ex “Don Marcelo” collection.