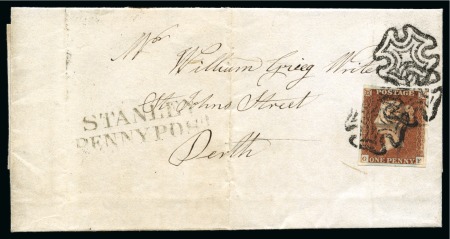 1841 1d Red pl.21 GF, fine to very good margins, tied to 1843 (Apr 1) wrapper sent locally from Stanley to Perth (Scotland) by THREE black Maltese Crosses, and is also cancelled by a four-pointed star in the same ink as the “STANLEY / PENNY POST” hs adjacent, which has been described as an inspector’s mark in the past but the Mike Jackson cert. suggests it could be a cancellation at the Stanley receiving office, reverse with Perth ds, a striking and rare cover, cert. Mike Jackson (2014), illustrated in Danzig & Goldsmith’s “The Cancellations of the 1841 Penny Red”, p.68.