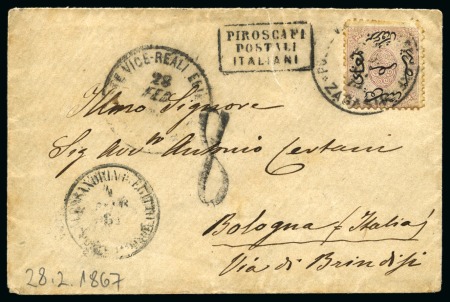 1867 (28.2), Small neat envelope from Zagasik to Bologna and franked with Egypt 1st Issue 1pi, the cover travelled through the Egyptian Post Office to Alexandria, it was then carried by the Italian Post Office to Bologna, backstamped Brindisi (9.3.1867), Bologna (10.3.1867), postage due of 80 centesimi was levied on arrival at Bologna, a scarce usage