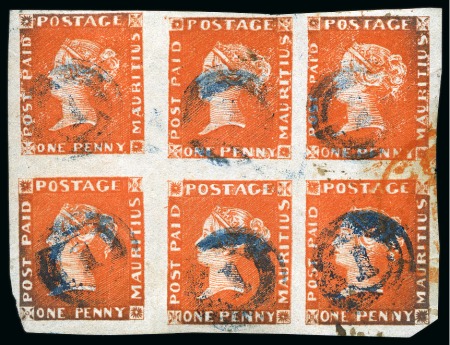 1d orange-vermilion, BLOCK OF SIX, positions 1-6, good to very large all round except bottom left and right, all cancelled by rare blue numeral ‘1’ of Mahebourg and a portion of red London ds applied in transit, some usual toning, extraordinarily fine for such an important and large multiple, exhibition showpiece (SG £108’000+)

On the reverse of the block we can see the outline of the flap of the original envelope to which it had been affixed, which is therefore not a crease.

This spectacular block in its rich bright shade clearly shows, amongst other characteristics of the earliest impression the ‘sticky print’ and uneven inking of the beginning period. “The impression is so early that if the paper was yellowish it would undoubtedly classify as the earliest” (Burrus 1968). We now know that several different papers were used at the same time and can confirm without doubt that this block is from the EARLIEST impression.

Arnold Rudge states “After very careful thought and examination I am convinced this block is an Earliest. There is also an amazing DOUBLE PRINT of the design best seen at lower right”

This is the LARGEST KNOWN MULTIPLE of the Earliest impression and of the entire Post Paid issue.

An outstanding item of phenomenal importance