Has PDF Scans
Back to catalogue: Rarities of the World in Partnership with MSF Previous lot Next lot 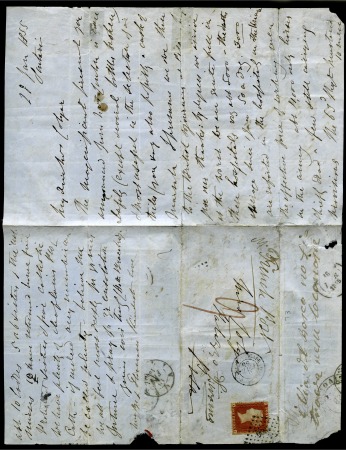 1855 (Jan 28) Entire from Charles Bracebridge, mentor and protector of Florence Nightingale, sent to Italy most unusually by French Post, bearing GB 1854 1d tied by “petits chiffres” “1896” lozenge of Marseilles, believed to be A UNIQUE CANCELLATION ON ANY GB ADHESIVE, with adjacent “ESCADRE DE LA MEDITERRANEE”, a scarce mark even on French mail

Note on the contents: “Florence is opposite me, writing to the Secretary of War….” and referring to Lord Raglan as the modern-day “Prometheus Vinctus”. Within the outer entire is a further letter written some days earlier, stating it to be withheld pending the arrival of a consignment of gifts to all at the hospital. The litany of horrors suffered in the war, along with the successes which Florence was able to bring about, covers some eight pages

A document of the utmost historical importance, a major centerpiece of any Crimean exhibit, and a unique GB used abroad cover