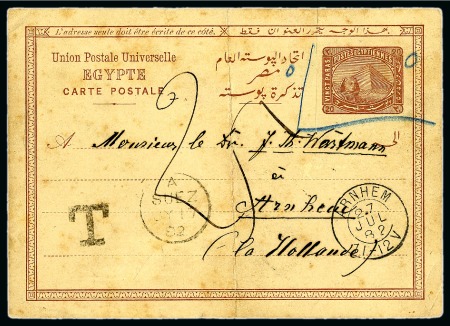 1882 (17.7) Post Card from Suez to Arnhem, Holland, written on Egypt 20 paras brown postcard, cancelled by the British Post Office SUEZ / JY 17 82 circular datestamp and the arrival cancellation ARNHEM / 27 JUL 82, the franking of 20 paras has been nullified at the British Post Office using blue crayon ‘0’ marks in compliance with U.P.U. regulation, postage due of 25 centimes (equivalent to 40 paras Egyptian) has been indicated in manuscript and a ‘T’ (taxe) mark applied, heavy file fold, the only recorded example

Note: The postcard had not been posted in the Egyptian postal system but dropped in the post box at the British Consulate at Suez. Only mail franked with British stamps could be accepted, therefore the franking of Egypt 20 paras was nulllified. The post office in the British Consulate re-opened for approximately one month due to military needs in July 1882 – some 4 years after it had been closed for public use. British forces landed on 12th July 1882 in Egypt in reaction to riots and a nationalist uprising led by Arabi Pasha