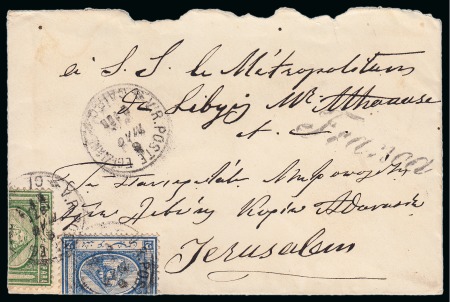 1868 (6.5) Small envelope from Cairo to Jerusalem, franked with Egypt 2nd Issue 1867 2 pi. blue and 20 pa. green tied Cairo circular datestamp, with cursive “FRANCA” handstamp alongside. The envelope was handed to the Austrian Post Office with a backstamp ALEXANDRIEN/20.5, very fine and an unusual usage

Note: Peter Smith writes in page 55: “A postal convention with Egypt was approved on July 23rd 1868, with effect on October 1st, which allowed letters to be prepaid from anywhere in Lower Egypt entirely with Egyptian stamps for carriage from Alexandria by the Austrian post. A special informational hand stamp, Franca, in cursive letters, was provided to identify such letters. The simple letter rate was 2 pi. 20 pi.” It is interesting to note that this envelope went through the Austrian post office using the guidelines of the Austro-Egyptian convention several months before the effective date of the convention.