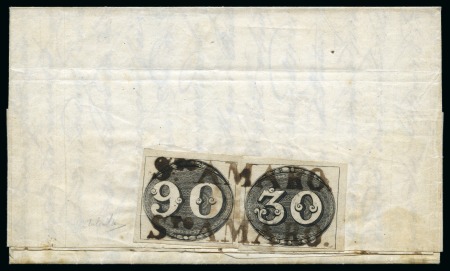 1843 (Nov 10) Entire from Santo Amaro to Portugal franked on the reverse with 1843 30r and 90r Bull’s Eyes cancelled by two clear strikes of the “Sto. AMARO” hs, both with good to large margins, the 90r with horiz. crease, unique example of this postmark on cover and the earliest of the four recorded transatlantic covers (the only in 1843) with Bull’s Eye frankings, an extremely rare exhibition showpiece and one of the major rarities of Brazil

Note: There are only 7 Bull’s Eye frankings going abroad in total; three to Portugal, one to France and three to Argentina