Back to catalogue: China & Japan 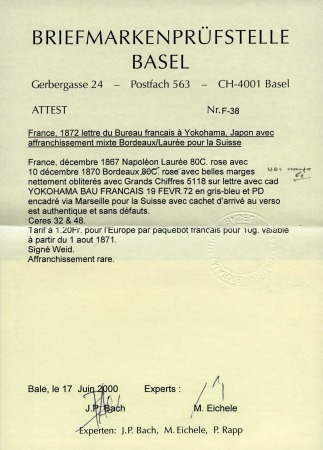 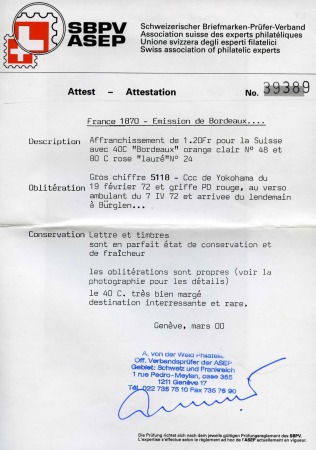 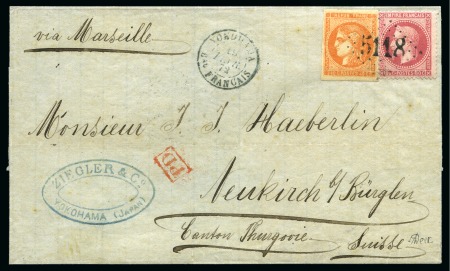 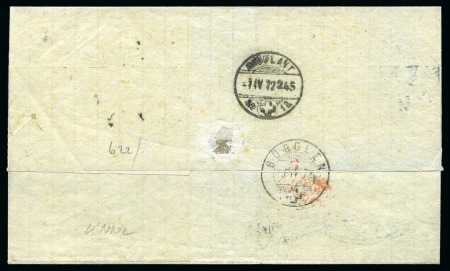 1872 (Feb 19) Cover sent to Bürglen (Switzerland), paying the French paquebot single rate up to 10 grams with ‘Empire Laureated’ 80c in combination with well margined ‘Bordeaux’ 40c, both cancelled by “5118” lozenge in black with “YOKOHAMA/BAU FRANÇAIS” cds at left in blue, backstamped on arrival; an extremely rare usage -probably unique- of the ‘Bordeaux’ 40c in Japan, being unrecorded by Yvert on cover; (no ‘Bordeaux’ Issue covers were illustrated in the handbook dedicated to the Ryohei Ishikawa collection published in 1976); certs. Von der Weid (2000) and Briefmarkenprüfstelle Basel (2000).

Note: According to Jun Ichi Matsumoto, less than fifteen covers are recorded bearing any value of the ‘Bordeaux’ Issue, which was belatedly available in Yokohama, after mid-1871 (the ‘Bordeaux’ stamps were issued in France between 30.9.1870 and 1.1.1871).