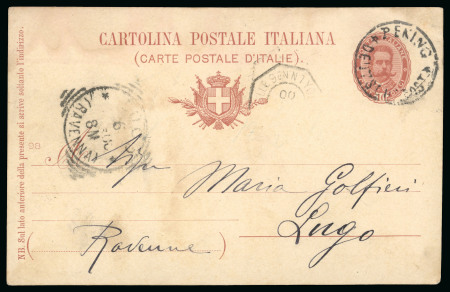 1900 (Oct 11) Italian “Umberto” 10c postal stationery postcard from Peking to Lugo (Italy), exceptionally accepted despite representing an Italian denomination and dispatched at the German P.O. with provisional “PEKING/DEUTSCHE POST” circle postmark made of wood, type I, with partial French Ligne N n. 6 octagonal ds and receiving square cds at left, some faults of no significance for this exceptional item. The sender indicates that “Tomorrow I am leaving with the lieutenant colonel for a war operation against Pao-Ting-Fu; as this will require at least 20 days, I am writing before departing…”. The only example recorded of acceptance of any Italian value by the German postal service in China, further enhanced by the very rare usage of the provisional German postmark on non-philatelic mail, probably the most important item of the Italian presence in China during the Boxer War, being enriched by war-events text.

Note: The postal service of the Italian troops in China, which was serviced by the Italian Navy, suffered discontinuity and delivery delays of up to three months, this being a grievance for the troops. On top of this, the winter caused the ships to move into the sea as the Taku Bay was getting frozen. In September, October and November the Italian postal service worked very irregularly, also due to the great mobility of the troops. In order to improve this situation, the Italians requested the Germans to assist them with their postal service. An agreement was found, stipulating that the Italians had to use German stamps and postal documents; this item is the exception to the rule. The German P.O. in Peking was opened on 11.09.1900 (other sources indicate 20.09); as the metallic handstamps had not arrived yet, a local artisan produced a softwood made handstamp which got worn soon, this being replaced by a second type, also made of wood, but of stronger quality.