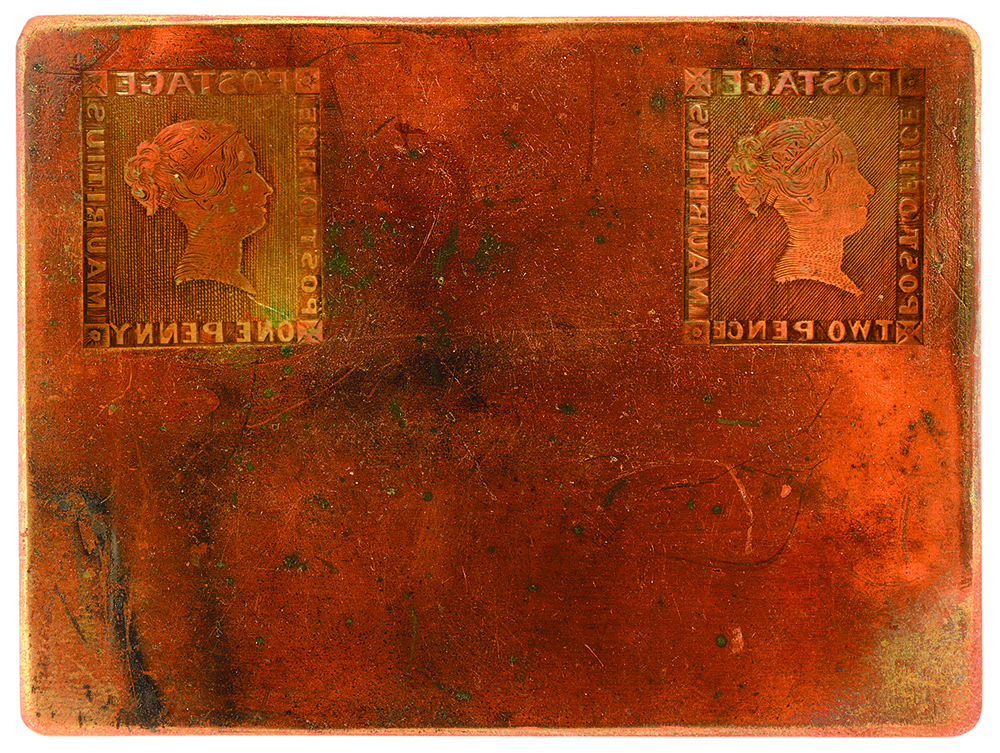 Highest price ever paid for a printing plate.

Mauritius « Post Office » issue printing plate: intaglio (as opposite to relief) printing plate in copper, 81.05×60.6mm, with a weight of 46g, showing single cliché of the 1d and 2d values each measuring 20.4×23.6mm with a separation of 31mm between engravings; both values showing the inscription « POST OFFICE » « POSTAGE » « MAURITIUS » and either « ONE PENNY » or « TWO PENCE » bordering a portrait of Queen Victoria, with background shading of vertical and diagonal lines (approx. 50 degrees CCW or CW respectively).
Condition: It is said to have been bent at one time and thought to have been straightened (as it is currently) in the 1880s. The plate shows some oxidisation and ink remainders (likely from later reprints).

Notable marks made (whether intentionally or by accident) since its use in 1847 include the following:

2016 RPSL Certificate
The plate has been certified as being authentic by the Expert Committee of the Royal Philatelic Society in London.

2015-16 David Feldman SA has made comparative studies between the plate and some of the original (certified) stamps printed with it in 1847 and reprints made in 1912 through digital imagery analysis, including:
– Ultra-high definition scanning
– Macro photography
– Precision digital measurement and sectioning
– Semi-transparent foregrounds and superimposition

These analysis have proven that the stamps tested (Nos. 1, 6, 7, 8, 13, 21, 23 and 24 – as per L. N. & M. Williams numbering system), were undoubtedly printed with the plate. The tests also helped to corroborate that the plate was marked after its original use.