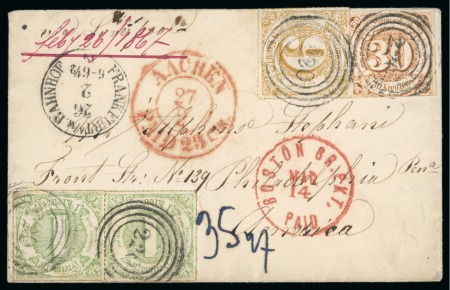 German States – Thurn and Taxis. 1867 (Feb 26). Envelope from Frankfurt to Philadelphia, bearing 1859 30kr, slightly touched in part of the lower margin, 1866 1kr pair (faint toning) and 9kr type II, each tied by « 220 » target cancel, with alongside matching cds, red Aachen transit denoting the 23c credited to the USA and « Boston Br.Pkt./Paid » arrival cds also in red, embarked on the Cunard «  » « Africa » at Liverpool; a very attractive cover with clear strikes and including the rare second issue 30kr; cert. Sem (2009).

Note: After the Prussian victory over Austria in 1866, the « Free City of Frankfurt » was occupied by the Prussians; it lost its independence and Frankfurt was included under the postal administration of Thurn and Taxis, being permitted to use a reduced rate. The 41 kreuzer franking (equal to 28c) paid the Prussian closed mail including 6kr of internal postage and 35kr of foreign fees.