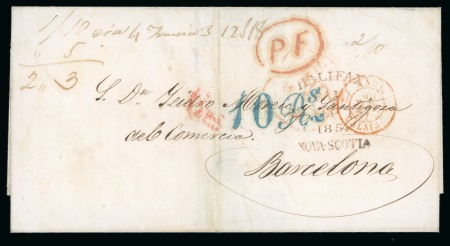 1851 (Sep 18). Cover from Halifax to Barcelona, Spain, « 2/10 » in ms at top left prepaying the single rate to the Spanish border, « HALIFAX/PAID/NOVA SCOTIA » in red, 2s3d notation at top left to denote the British claim, « PF » oval indicating rate paid including the French port and blue « 10Rs~ » paying the full rate in Spain, as there was not an Anglo-Spanish postal treaty into force, carried by the Cunard SS « America » to Liverpool; a rare stampless usage to this destination.