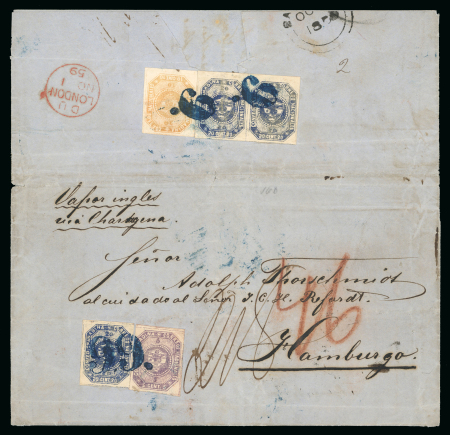 1859 (Sep 26) Complete folded letter (in English) from an English merchant in Bogota to his brother in Hamburg, franked by First Issue 5c and 20c tied together on face by « 9. » hs, with pair of 20c plus 10c tied together on reverse by same, all stamps displaying ample to large margins, sent via the English mail with British P.O. Cartagena bs (10.10.1859) and London transit (Nov.1) plus Hamburg Prussian mail bs (St. P.A. / 4 Nov. 59), ms « 2/8 » (2sh8d) rated in London plus ms « 46 » (schillings) in red crayon on arrival. Nothing comparable is known for its multicolour franking and rare destination. This item escaped the grasp of other famous collectors of Columbia such as Londono, Hubbard and Goeggel, and is in a special class all its own. The 75 centavos double weight Colombian franking (note small m/s « 2 » on reverse confirming 2nd echelon of weight) paid for the internal transit from Bogota via Honda to Cartagena (25 centavos) plus 50 centavos for maritime postage, and was given to the British Consul in Cartagena for onward transmission, with the use of the British post being necessary as Colombia did not then have a postal convention with Prussia, and the « 46 » applied at the Prussian postal agency in Hamburg represented all charges for a double weight letter from Carthagena, including the British charge. The cover was carried from Cartagena to St. Thomas by the ship « Solent » on Oct. 10 and was transferred to the « La Plata » which carried it to Southampton – both steamboats of the RMSP. One of the most important First Issue covers from anywhere in South America and a true-world class rarity; cert. RPSL (1980); ex Langlais and Hackmey