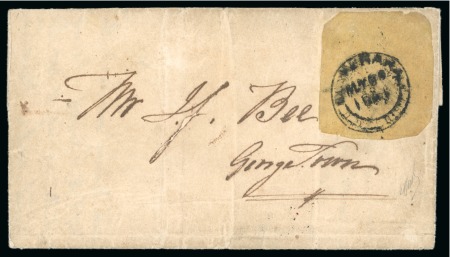 THE MOST SPECTACULAR « COTTON REEL » ON COVER

1850-51, 4c black on pale yellow on pelure paper (very thin and transparent, almost onionskin), Townsend Type A, with initials of postal official Lorimer « WHL » in pencil, of stunning appearance featuring large to exceptional margins and originating from the upper right corner of the sheet, used on cover from Plantation Woodlands (list of cattle enclosed) to Georgetown, with central Demerara datestamp on 9 May 1851; (SG £520’000).

An exceptional stamp and the largest margined « Cotton-Reel » in existence, a rarity of a very high degree and quality. As a non-variety, it represents the most important single franking of this issue, clearly ranked as one of the gems of British Guiana and A GREAT ARISTOCRATIC RARITY OF WORLDWIDE PHILATELY.

In addition, one of only two covers recorded, exhibiting a « Cotton Reel » on pelure paper, both offered in this sale and displaying different types of separation: round and square.

Maurice Burrus (Lot 13, Robson Lowe, November 1963, « an enormous example of this rarity from the corner of the sheet »)