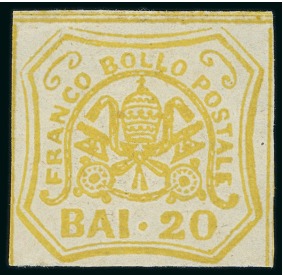 1858, 20 b. yellow, unissued, uncancelled without gum, good to very large margins displaying on three sides the dividing lines between stamps, refulgent color. Two complete sheets of 100 are recorded, of which one is in the Vatican Postal Museum, and only about ten single examples are known, this being probably the finest. One of the rarest and most valuable stamps of all Italian territories. The example presented here has the additional attribute of having been chosen to illustrate this issue in the Sassone catalogue.