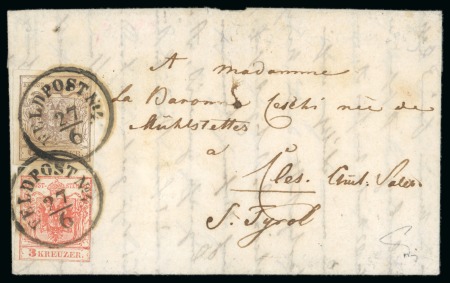 The Fieldpost No. 4 was issued for a military unit which should have taken part in the occupation of the Principalities during the Crimean War, but this cover indicates that it remained in Hermannstadt at least a further month according to the literature (Clement, Tchilinghirian). Even at that late point the sender writes to his mother to direct any further letters to Hermannstadt. The sender appears to be Julius Aloys Karl Hubert zu Spaur und Flavon, Earl of Spaur und Flavon (1829-1907)