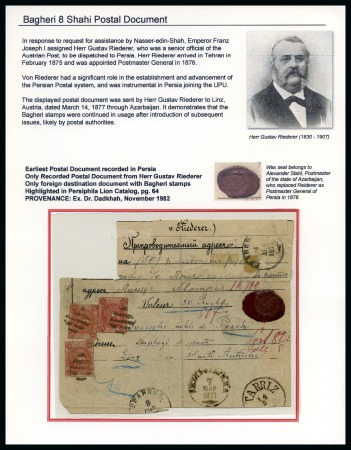 UNIQUE USAGE OF THE BAGERI ISSUE TO A FOREIGN DESTINATION

1868-70 8sh. reddish orange, three singles, applied to the front of a postal document, each tied by thick barred squared cancels, document was sent by Herr Gustav Riederer in Tabriz to via Azerbaijan to Linz, Austria, dated March 14, 1877, an important exhibition showpiece, neatly mounted and written up on an exhibition page, showpiece, signed Sadri

Note: Gustav Riederer, was a senior official of the Austrian Post, to be dispatched to Persia. He arrived in Tehran in February 1875 and was appointed Postmaster General in 1876. Riederer had a significant role in the establishment and advancement of the Persian Postal system, and was instrumental in Persia joining the UPU.